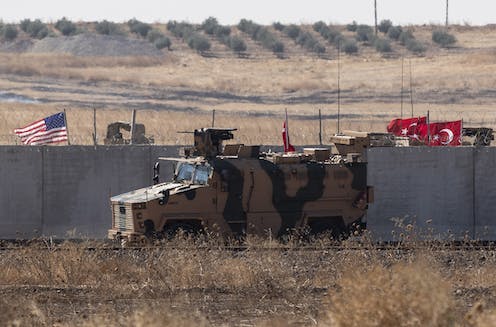 US President Donald Trump’s precipitate announcement he was withdrawing American forces from northeast Syria to enable Turkey to assert its authority along the border risks wider regional bloodshed – and further destabilisation of one of the world’s most volatile corners.

If implemented against a furious pushback from his own side of politics, the Trump decision threatens a region-wide conflagration. These are the stakes.

Trump has given contradictory signals before on the same issue. It remains to be seen whether he gives ground again after what appears to have been a hasty, certainly ill-considered, decision following a phone conversation with Turkish leader Recep Tayyip Erdogan.

Now under enormous stress from his own side, Trump is resorting to bombast. He tweeted:

Leading the charge against the Trump decision is his close ally, South Carolina Senator Lindsey Graham. He has threatened to introduce a Senate resolution opposing the administration’s decision, describing the move as a “stain on America’s honour”.

Like plucking a thread from a finely woven Turkish rug, the administration’s announcement effectively to abandon a Kurdish militia could lead to a complete unravelling of that part of the Middle East in which various forces have collided since the Syrian civil war broke out in March 2011.

Read more: Iran and US refusing to budge as tit-for-tat ship seizures in Middle East raise the temperature

America’s Kurdish allies, the Syrian Democratic Forces (SDF) militia arm (known as the YPG), would be at the mercy of a Turkish thrust across the Syrian border into territory the Kurds now control.

Turkey has made no secret of its intention to create what it is calling “safe zones” up to 30 kilometres inside the border in northeast Syria. This would enable it to relocate tens of thousands of Syrian refugees among the 3.6 million on Turkish soil.

In the face of such a Turkish move, the YPG would be hard put to hold sway against both Turkey’s military and Islamic State fighters seeking to take advantage of militia weakness in the absence of US support on the ground and in the air.

The ABC reports that something like 70,000 members of Islamic State or their supporters are being held in camps in SDF-controlled territory. Around 60 people of Australian origin, including children, are in this situation.

Thousands of IS militants are being held in prison camps in SDF-controlled territory. These fighters have already sought to stage mass breakouts from prison facilities.

The situation along the Turkish-Syria border is, by any standards, an explosive mix.

At the same time, Syrian forces of Bashar al-Assad, backed by Iran and Russia, would inevitably be poised to take advantage of chaos and regain territory lost in the civil war. This is a highly destabilising scenario.

In other words, Trump’s announcement could hardly portend a more worrisome outcome in a part of the world riven by years of conflict.

The US announcement also sends a disturbing signal to the wider Middle East that the Trump administration is intent on pulling back from its commitments in an unstable region.

Confidence in American steadfastness is already precarious due to Trump’s repeated statement that America wants to remove itself from “endless” wars in the Middle East.

In a Twitter message early this week that amplified a White House announcement, Trump said it was time for the US to withdraw from “these ridiculous Endless Wars”.

Trump also attacked European allies over their failure to take back their nationals among IS fighters held in SDF-run detention centres in northeast Syria. Some 10,000 prisoners are being detained.

This is a situation ripe for Iran’s Revolutionary Guard Corps (IRGC) and Vladimir Putin’s Russia. The latter is seeking to reassert itself in a region it regards as its own sphere of influence. Moscow’s support for Damascus is part of this regional power play.

Read more: Twenty-five years after the Oslo Accords, the prospect of peace in the Middle East remains bleak

These are telling moments. Signs of an apparent American lack of commitment might well encourage Iran and Russia, as well as Islamic militants such as IS and al-Qaeda. These groups have been biding their time.

None of America’s regional friends, including Gulf states and Israel, will draw any comfort at all from the Trump decision – if implemented – to head for the exit.

By any standards, this is a mess of Trump’s own making.

Why Athletes Should Invest in A Sports Watch

It’s not uncommon to find athletes and coaches dismissing sports watches as an unnecessary accessory. After apparel and a water bottle (in addition to yourself, of course), watches can prove...

Graeme McCrabb/AAPAs this summer draws to a close, it marks just over a year since successive fish death events at Menindee in Lower Darling River made global headlines.Two independent investigations...

It's now a matter of when, not if, for Australia. This is how we're preparing for a jump in coronavirus cases

ShutterstockWhile countries around the globe have been taking precautions to prevent the spread of COVID-19, the disease caused by the novel coronavirus, it has now been reported in 37 countries...

Many Scots want independence from the United Kingdom. How might that play out in a post-Brexit world?

AAP/EPA/Robert PerryOf the many issues thrown up by Brexit, one of the most pressing is the territorial integrity of the United Kingdom. Brexit was in large measure a revolt...

a 3-point plan to reach net-zero emissions by 2050

Requiring firms to only sell financial products we can use is good, but not enough

ShutterstockThe government’s financial system inquiry, on which I sat, reported five years ago.It recommended that the creators of financial products be subject to a design and distribution obligation (DDO), which...

a real life experiment illuminates the future of books and reading

Books are always transforming. The book we hold today has arrived through a number of materials (clay, papyrus, parchment, paper, pixels) and forms (tablet, scroll, codex, kindle). The book can...

The government would be looking for the private sector to put in four or five times as much as it invests in research and development of particular technologies to reduce...

Morrison looks to his messaging on coronavirus and climate

Two issues are currently presenting the Morrison government with fast-moving targets.One is the fallout from the coronavirus, where the picture has been altering on a near-daily basis. The other is...

The federal government has activated its emergency response plan to deal with a spread of the coronavirus locally, in anticipation of it becoming a “pandemic”.It is also considering limited assistance...

ShutterstockHumans are physiologically hardwired to love and seek out sweet things. It’s an ancient survival mechanism that evolved to prepare our bodies for periods of fasting when food supplies were...

Juries will soon learn more about people accused of child sex crimes. Will it lead to fairer trials?

ShutterstockThe NSW government has just introduced a bill that will, among other significant reforms, make it easier for a jury to be informed about the prior convictions of a person...