The Nationals’ crisis is a political version of what social scientists call a “wicked problem”. It’s without any obvious solution, and every future course is fraught.

This is a “wicked problem” not just for the minor coalition partner, but for Scott Morrison also. He’s an alarmed and essentially powerless observer of a struggle destabilising the Coalition.

This week’s events – the resignation of Llew O’Brien from the Nationals, the hugely embarrassing defection of several of their MPs in a House of Representatives vote which made O'Brien deputy speaker, and the continued public positioning by Barnaby Joyce and his campaign manager Matt Canavan – indicate the trouble will continue.

On any reckoning, the duo of Joyce and Canavan, a former deputy prime minister and an articulate former cabinet minister, can land some hefty punches from the backbench.

Three possibilities lie ahead: Michael McCormack remaining leader of a split, dysfunctional party; Joyce having a second, and successful, tilt; David Littleproud emerging as a compromise.

McCormack is paddling desperately but his position looks increasingly unsafe.

His post-ballot reshuffle - a blatant jobs-in-return-for-votes exercise - has given the Joyce camp new grounds for stirring.

Joyce couldn’t have expected a post, and there were arguments both ways about whether Canavan’s disloyalty should have been rewarded by restoring him to cabinet. Beyond them, McCormack had either no room or no inclination for conciliatory gestures, as well as missing the opportunity to promote some new talent.

McCormack feels the party pressure to be more visible, but questions will inevitably be about the divisions. Asked in a Wednesday Nine interview whether he could survive, he sounded defensive rather than convincing. “Absolutely. I’m strong, I’m determined. And I’m going to stay.”

A move to Joyce would be the rashest course. If the party were confident it would get back the “old Barnaby”, the Barnaby of the early days of his leadership, it would switch in a flash.

But the doubters worry about the current Barnaby and fear how wild a ride they’d be in for.

They all know, however, that he won’t stop agitating. This week Canavan and Joyce launched the first of a promised “Weatherboard and Iron” series of podcasts. Their matey chat canvassed Joyce’s challenge, O'Brien’s resignation, the Nationals’ supporters, and of course coal.

Canavan squashed speculation - following O'Brien’s remaining in the Queensland Liberal National Party - about the prospect of LNP members meeting as a separate party room in Canberra. Canavan is a member of the LNP but he’s about promoting the Nationals’ brand. Both Joyce and Canavan tried to talk O'Brien out of quitting the Nationals (as they would, given his leaving takes out a Joyce vote).

In the podcast, Joyce encapsulated the broad pitch he’s making to the party when he said: “We’ve got to be bold enough and bolshie enough to get the outcomes that [Nationals’ constituents ] need and put yourself in a position where you can get the outcomes they need.” 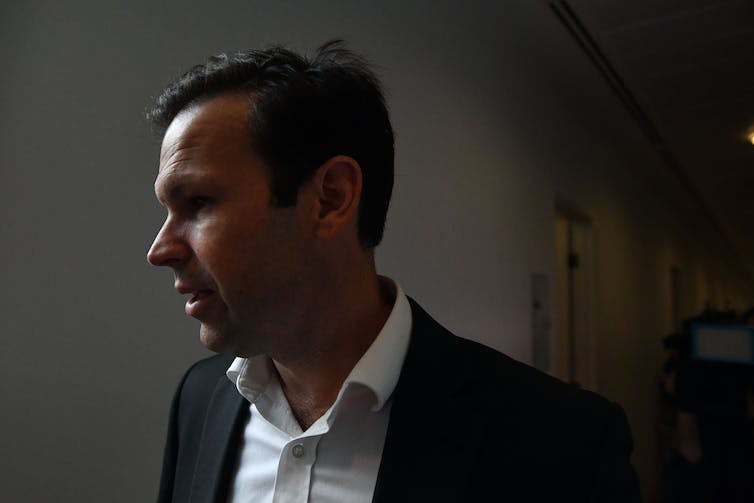 Mick Tsikas/AAP The middle course for the Nationals – a move to Littleproud – could be the most rational. It would hold risks, given his inexperience. But he’s performed competently as a senior minister; he also comes from Queensland, and it is the Queenslanders who are the most unsettled among the Nationals. The problem with the Littleproud scenario is there is no clear path there. To have maximum authority in the party, Littleproud would need to be a consensus candidate. McCormack would ideally have to be “tapped” by someone close to him – such as Darren Chester – and agree to step down for the greater good. Joyce and his supporters would have to go along with the change. Such compliance is against the grain of each of them. Littleproud is not inclined to challenge, which would be the worst way for him to get the leadership. Unless and until the Nationals (100 years old this year, incidentally) get sorted, their in-fighting will poison the Morrison government. But Morrison is impotent in the crisis. He has no formal role in the Nationals’ affairs, and he does not appear to carry informal influence with them, especially since his own standing has been reduced post bushfires. Indeed, with one issue being the Nationals’ feeling McCormack is too subservient to Morrison, any sign of Liberal interference would worsen things. There was resentment among Nationals at Morrison being seen to push Bridget McKenzie under the bus over the sports grants, not least because they felt his office had more involvement than it admitted. Those government MPs with a bent to black humour might note the Nationals’ war overshadowed the still-reverberating aftermath of the sports affair, at least until late Thursday. Thanks to a last-minute change of heart by Pauline Hanson, the government defeated an attempt to clip Senate leader Mathias Cormann’s wings. The context was the Senate’s trying to force the release of the report Morrison commissioned on McKenzie from his departmental head Phil Gaetjens. But even that small victory came with a tart taste. Crossbencher Jacqui Lambie, angry at the government flouting accountability, said she’d suspend negotiations on the legislation to crack down on union bad behavior. “If they can’t show integrity up here, and do the right thing, why would I be voting for an ensuring integrity bill?” she said. It was a reasonable question. On Thursday afternoon the sports rorts affair was refueled with the Audit Office’s appearance before a Senate inquiry. The inquiry heard that, contrary to Morrison’s repeated claim that no ineligible projects were funded, some 43% were ineligible. (They had been judged eligible by Sport Australia but subsequently became ineligible because of timing factors and amended applications.) The committee was also told spreadsheets went to and fro between the Prime Minister’s office and the McKenzie office, with the PMO making direct representations for projects, though not necessarily successfully. Amid the government’s misery, Labor suffered an own goal when Ten revealed the existence of a new sub-faction, which calls itself the “Otis group” (after a Canberra restaurant), formed within the caucus. It comprises up to 20 conservative members of the right faction, and is convened by resources spokesman Joel Fitzgibbon, who has been a vocal advocate of Labor taking a more sympathetic attitude towards coal. Its members are worried Labor is failing to pay enough attention to its working class base. Apart from coal, among their concerns is the issue of religious freedom. The group’s defenders say it is a way of giving the party’s conservatives a voice and keeping them happy. For the future, it is also a potential source of leverage for Fitzgibbon and like-minded caucus members when decision time comes on climate change and other issues. The Otis group has only had one dinner – on the Sunday before parliament resumed. Anthony Albanese didn’t know of the group until he was warned the story of its existence was about to break on Wednesday. His anger doesn’t require description. The publicity around the Otis group gave the government some grist for Thursday’s question time. But the Coalition still left Canberra that night, after the first parliamentary fortnight of 2020, in a bad place.

Opposition leader Anthony Albanese sought to claim the climate policy high ground last week with his commitment to a net-zero emissions target by 2050. But figures on Australia’s emissions from...

ShutterstockThe Australian government touts compulsory income management as a way to stop welfare payments being spent on alcohol, drugs or gambling. The Howard government introduced the BasicsCard more than a...

ShutterstockMental health inpatient units should be safe and healing places. But we’ve found women staying in these units are being threatened, harassed and sexually and physically assaulted by men.These are...

Christina Neudorf, Author providedAbout 74,000 years ago a volcanic eruption at what is now Lake Toba in Sumatra, Indonesia, created one of the most dramatic natural disasters of the past...

Five Australian universities get the bulk of philanthropic donations

natasaelena/ShutterstockThe assumption that retired people have minimal housing costs underpins the settings of our retirement incomes system. But the real state of housing for older Australians today makes it critical...

The jobs market is nowhere near as good as you've heard, and it's changing us

We are continually being told that more of us are employed than ever before. Reserve Bank Governor Philip Lowe points out (correctly) that a higher proportion of us are in...

Decla-Bioscop AGBerlin. February 26 1920. A new silent film, The Cabinet of Dr. Caligari, is released to unsuspecting German audiences and quickly becomes a worldwide sensation. “When will I...

The inquiry into allegations of misconduct by Australian special forces in Afghanistan is examining 55 separate incidents or issues, according to the Inspector-General of the Australian Defence Force report, tabled...

If you're ageing and on medication, it might be time to re-assess your alcohol intake

ShutterstockDrinking patterns tend to change as we age. The older we get, the more likely we are to drink on a daily basis. But older adults often perceive that drinking...

The Coalition government has supported Labor’s motion in the Senate to call for men’s rights activist Bettina Arndt to be stripped of her Order of Australia award over her comments...

Weinstein conviction a partial victory for #MeToo, but must not overshadow work still to be done