In recent days, the prime ministers of the UK and Australia each declared they are working toward providing safe haven visas for Hong Kong residents. In the US, lawmakers passed a bill that would impose sanctions on businesses and individuals that support China’s efforts to restrict Hong Kong’s autonomy.

The prospect of a shift from rhetoric to action reveals just how dire the situation in China’s world city has become.

July 1 is usually associated with Hong Kong’s annual pro-democracy march. This year, it saw around 370 arrests as protesters clashed with police under the shadow of a brand new national security law.

Read more: 'We fear Hong Kong will become just another Chinese city': an interview with Martin Lee, grandfather of democracy

Hong Kong police have been cracking down hard on demonstrators for over a year – with Beijing’s blessing – and most of this week’s arrests were possible simply because police had banned the gathering.

But ten arrests were made under the national security law for conduct including the possession of banners advocating Hong Kong independence.

Already, a pro-democracy political party has disbanded and activists are fleeing the city.

The national security law had been unveiled just hours earlier, its details kept secret until this week. It was imposed on Hong Kong in unprecedented circumstances when Chief Executive Carrie Lam, Beijing’s appointed leader in the city, bypassed the local legislature and promulgated it directly.

Secession, for example, includes the acts of inciting, assisting, supporting, planning, organising or participating in the separation or change of status of any part of China, not necessarily by force. This is calculated to prevent even the discussion of independence or self-determination for Hong Kong. 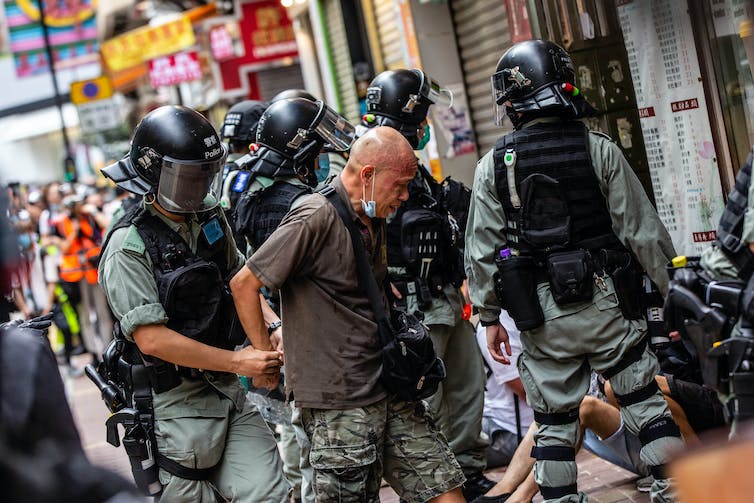 More than 300 people were detained at a protest this week and ten were arrested under the new law. e: Sipa USA Willie Siau/SOPA Images/Sipa U

Collusion includes making requests of or receiving instructions from foreign countries, institutions or organisations to disrupt laws or policies in or impose sanctions against Hong Kong or China.

This is aimed at barring Hong Kongers from lobbying foreign governments or making representations at the United Nations, which many protesters have done in the past year.

The law contains severe penalties: for serious cases, between ten years and life imprisonment. It also overrides other Hong Kong laws. The presumption in favour of bail, for instance, will not apply in national security cases, facilitating indefinite detention of accused persons.

Defendants can be tried in Hong Kong courts, but in a major departure from the city’s long-cherished judicial independence, the chief executive will personally appoint the judges for national security cases.

The chief executive also decides if a trial involves state secrets – a concept defined very broadly in China. In these cases, open justice is abandoned and trials will take place behind closed doors with no jury. 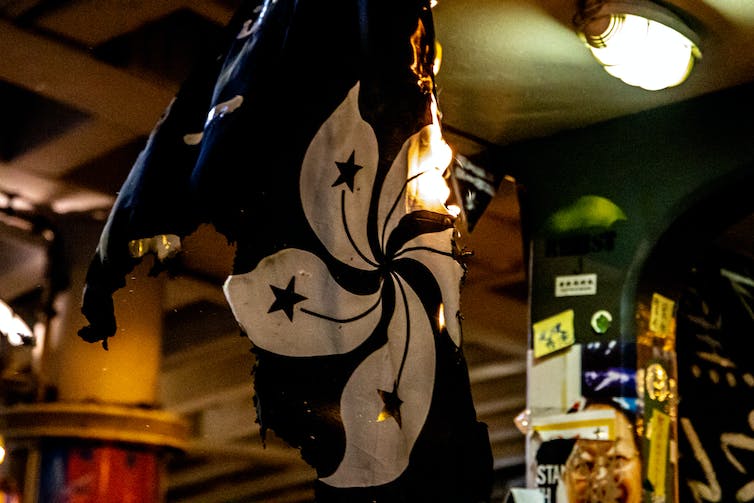 While Hong Kong courts can apply the new national security law, the power to interpret it lies with Beijing alone. And in the most serious cases, mainland Chinese courts can assume jurisdiction.

This raises the prospect of political prisoners being swallowed up by China’s legal system, which features no presumption of innocence and nominal human rights guarantees. China also leads the world in executions.

Much of the national security law’s content contradicts fundamental principles of Hong Kong’s common law legal system and the terms of its mini-constitution, the Basic Law.

Even the territory’s justice minister – another unelected political appointee – has admitted the systems are incompatible.

Why it is deliberately vague

In the typical style of mainland Chinese laws, the national security law is drafted in vague and general terms. This is designed to give maximum flexibility to law enforcement and prosecutors, while provoking maximum fear and compliance among the population.

The government has said calls for independence for Hong Kong, Tibet, Xinjiang and even Taiwan are now illegal, as is the popular protest slogan “liberate Hong Kong; revolution of our times”. 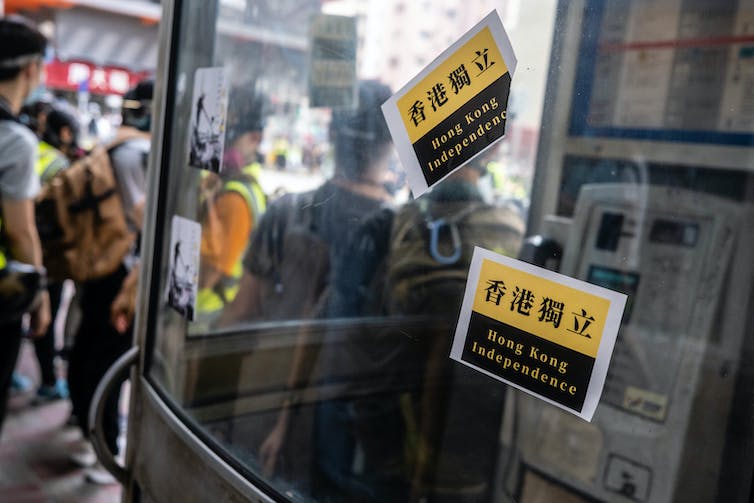 A Beijing spokesman has said the charge of collusion to “provoke hatred” against the Hong Kong government could be used against people who spread rumours that police beat protesters to death in a notorious subway station clash last year, echoing the infamous mainland Chinese law against “picking quarrels and provoking trouble”.

The law does not appear to be retroactive, but fears that it could be interpreted that way have caused a flurry of online activity as people have deleted social media accounts and posts associating them with past protests.

This is unsurprising given the Hong Kong government’s record of trawling through old social media posts for reasons to bar non-establishment candidates from standing at elections.

Despite the promise of autonomy for Hong Kong, enshrined in a pre-handover treaty with the UK that China claims is now irrelevant, the national security law has escalated the project to “harmonise” the upstart region by coercive means, rather than addressing the root causes of dissatisfaction.

Under the auspices of the new law, the Chinese government will openly establish a security agency, with agents unaccountable under local law, in Hong Kong for the first time. It has also authorised itself in the new law to extend its tendrils further into civil society, with mandates to manage the media, the internet, NGOs and school curricula.

Under the weight of this authoritarian agenda, dissent in any form becomes an extremely hazardous prospect. It is no doubt Beijing’s intention that it will one day be impossible – or better yet, something Hong Kongers would not even contemplate.

Read more: China is taking a risk by getting tough on Hong Kong. Now, the US must decide how to respond

The aim of silencing all opposing voices – including those overseas – is clear from the purported extraterritorial operation of the law.

The international community has condemned Beijing’s actions, but its members have a responsibility to follow words with actions. The least that democratic countries like the US, UK, Australia and others can do is offer a realistic path to safety for the civic-minded Hong Kongers who have stood up to the world’s premier authoritarian power at grave personal risk.

Some 23 years after China achieved its long-held ambition of regaining Hong Kong, it has failed to win hearts and minds and has brought out the big stick. Its promises may have been hollow, but its threats are not.