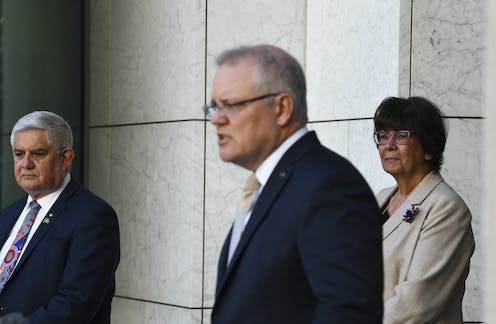 Anyone who has spent any amount of time in Indigenous affairs would be familiar with the buzzwords used in the announcement of the new Closing the Gap targets.

Read more: We have 16 new Closing the Gap targets. Will governments now do what's needed to meet them?

Thursday’s press conference also talked of a “historic agreement” framed by “honourable” intentions and an “evidence-base”. We heard much talk of “partnership” between community-controlled organisations and “mainstream government agancies”, along with responsibility “for all”, “accountability” and “reform”.

Sadly, there is nothing “unprecedented” about the agreement, or the language used to sell it. This discourse of Indigenous affairs - of promise and failure - does little more than create the illusion of Indigenous agency, racial progress and state benevolence.

Most media reports of the announcement, including from Indigenous outlets, readily accept and reproduce the political doublespeak with little scrutiny of the government’s claims.

We heard nothing from Morrison or Wyatt about the learnings from 12 years of Closing the Gap failure and how these insights have shaped a supposed “new approach” beyond, of course, setting different targets.

In fact, Morrison insisted prime ministers before him have had a “passion” and “dedication” for Indigenous affairs, and indeed shared a “frustration” with the lack of progress in it. As he explained, the problem was previous governments were “too ambitious without understanding the detail”.

And certainly, there is little that is actually ambitious about this supposed new approach.

The 16 new targets, while doubling in number, no longer have parity with non-Indigenous Australia as their target within this generation. So effectively, they aim to do less, but you wouldn’t know it from the coverage we have seen.

In examining the detail of the targets, we see references to increases and decreases with some specific percentages. There are also vague references to “toward zero,” with others simply declaring a goal of “sustained increase”.

Beyond the target of life expectancy, the agreement offers no sense of when parity might be achieved or even aspired to. This is striking, given the ideological foundation of Closing the Gap is literally about closing gaps of disadvantage. It is severely disappointing the federal government has largely escaped scrutiny over their claims surrounding this new national agreement.

While “identify and eliminate racism” featured as a “transformation element” of one of the priority reform areas, “racism” was then mentioned just ten times in the 47 pages of the actual agreement, with no definition in its definitions list. It is odd that the foundational structure of oppression, responsible for producing the racialised disparities this agreement is trying to ameliorate, is so poorly understood.

The lack of understanding shows. The agreement suggests racism will be fixed by pushing Indigenous peoples into “mainstream” institutions, on boards and identified leadership positions, which we know is a haven rather than remedy for everyday and systemic racism.

In lieu of race and racism, the terms “culture” and “cultural” are littered throughout the agreement. “Culture”, much like the agreement itself, provides an opportunity to blame Indigenous peoples for the structural disadvantage they are subject to.

It’s all about data

The big solution we are told - both in the press conference and the partnership agreement - is “data”. Data is offered both as a priority reform as well as a strategy in and of itself. Each Closing the Gap target is outlined in a table that lists how they will be monitored.

We are not offered a sense of the complexity of the problem being addressed, or even a strategy. Instead, we are told what data should be collected in relation to the goals.

It seems the strategy for addressing Indigenous disadvantage is to find better ways to monitor other forms of progress incrementally. Yet the focus here is largely on Black bodies and behaviours. There is little to no analysis of the institutions and systems responsible for the production of the racialised disparities Indigenous peoples experience.

As such, the data will likely reproduce the story of Indigenous failure that we are all too familiar with.

There is also little that is new about increased surveillance of Indigenous people as a policy measure - which is what this is. There is, however, a strong evidence base that tells of the long history of failure of such “interventions”

Read more: Ten years on, it's time we learned the lessons from the failed Northern Territory Intervention

This is about government failure

The failings in Indigenous affairs are not due to Indigenous people making poor choices. Nor is it because we lack data or evidence of what works. It is a result of a sustained indifference to the lives of Indigenous peoples, disguised as benevolence in fictitious claims of policy reform.

The issue is the failure - or rather refusal - to commit to structural reform that meaningfully attends to the relationship between Indigenous peoples and the state. Such reform demands recognition of the unique rights of Indigenous peoples, not simply more data on disadvantage and supposed Indigenous deviance.

Yet we are now being offered a partnership approach with government-funded Aboriginal and Torres Strait Islander organisations. Few have noted the power imbalance at the heart of this relationship. As Roy Ah-See, co-chair Uluru dialogues at UNSW’s Indigenous Law Centre has said,

You are never going to bite the hand that feeds you, so how can these organisations be representative if they only received resources from government?

When we cut through the talk of the new Closing the Gap agreement, it is clear this discourse of “change” works precisely so that everything can stay the same. The only actual difference in this week’s announcement was Indigenous organisations signed up to it.

And, it is most telling that while Indigenous peoples on the streets are still fiercely proclaiming “sovereignty never ceded” amid a pandemic, the peaks that represent them have signed up to an agreement in which sovereignty was never mentioned.