Yoshihide Suga is set to be Japan’s new prime minister after he was easily elected leader of Japan’s Liberal Democratic Party (LDP) on Monday.

Suga is due to be formally appointed prime minister by a vote in the Japanese parliament on Wednesday, where the conservative LDP has a majority in both houses.

Former prime minister Shinzo Abe’s resignation last month due to illness was a surprise. But once the leadership contest was declared, 71-year-old Suga - the chief cabinet secretary - was widely expected to be Japan’s next prime minister.

Wanting policy consistency, the leaders of five out of seven of the LDP’s major factions declared their support for Suga, which doomed the chances of challengers Fumio Kishida and Shigeru Ishiba.

Unlike Abe and many other Japanese politicians, Suga did not inherit a dynastic political support network. He is the eldest son of a prosperous strawberry farmer in the northern Akita prefecture.

The young Suga did not take up the family farm, but left for Tokyo. He studied at Hosei University and worked at a cardboard box factory and as a security guard.

Eschewing the radical student politics of the late 1960s, after graduation, he became a politician’s secretary. Suga was elected to the assembly of the port city of Yokohama in 1987.

A shrewd networker, he built up his own local power base and was elected to the national Diet (parliament) for the LDP in 1996.

After switching between different factions, Suga ended up unaligned. But he became close to Abe and was internal affairs minister in Abe’s first term of government in 2006.

In opposition, Suga was instrumental in helping Abe reclaim the LDP leadership in 2012, and was rewarded with the chief cabinet secretary position.

As chief cabinet secretary, Suga gained a reputation for ruthlessly controlling the bureaucracy and stonewalling the media at daily press conferences.

He played a crucial role in protecting Abe from greater scrutiny over numerous scandals that dogged his government. 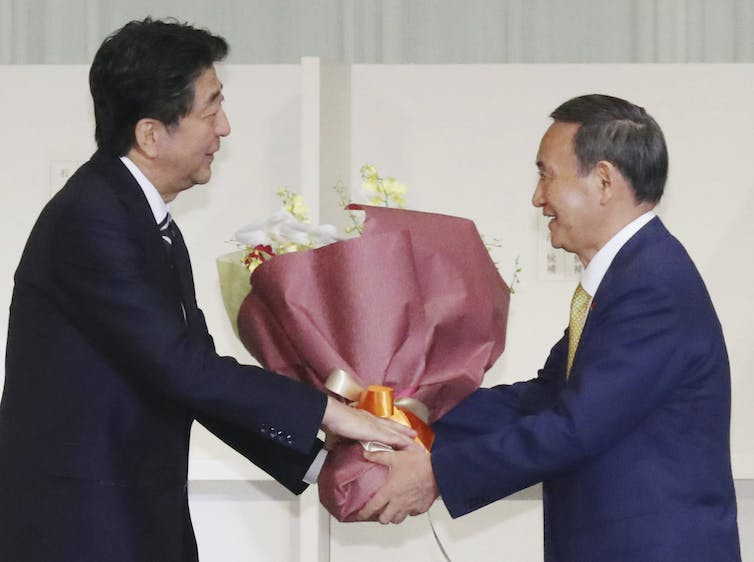 A teetotaller like Abe, Suga is renowned for a strict work ethic. He lives mostly in a government dormitory and rises each day at 5am to do 100 sit-ups.

This stern, humourless image was slightly leavened when he announced the name of the new Imperial era in April 2019, and briefly received the moniker of “Uncle Reiwa”.

What will Suga do now?

Suga now takes up the challenge of keeping coronavirus under control and has pledged to continue the record deficit spending and quantitative easing of “Abenomics”.

He has indicated the consumption tax could be raised again in future. Suga also wants to reduce mobile phone rates, restructure regional banks and encourage further digitisation of the economy.

But apart from COVID-19, there are big challenges ahead. Suga’s administration will struggle to restimulate the economy out of its deepest postwar recession, hold the delayed Olympics next year, and confront entrenched gender and income inequality.

Suga admits to being inexperienced in international affairs, and will possibly retain Abe - who for now remains in the Diet - as a special diplomatic adviser.

The new leader’s foreign policy priorities will be to maintain the US alliance, and keep relations with China relatively smooth. Unlike his rival Ishiba, Suga does not favour creating an “Asian NATO”, but will still promote cooperative middle-power relations with ASEAN, India and Australia. 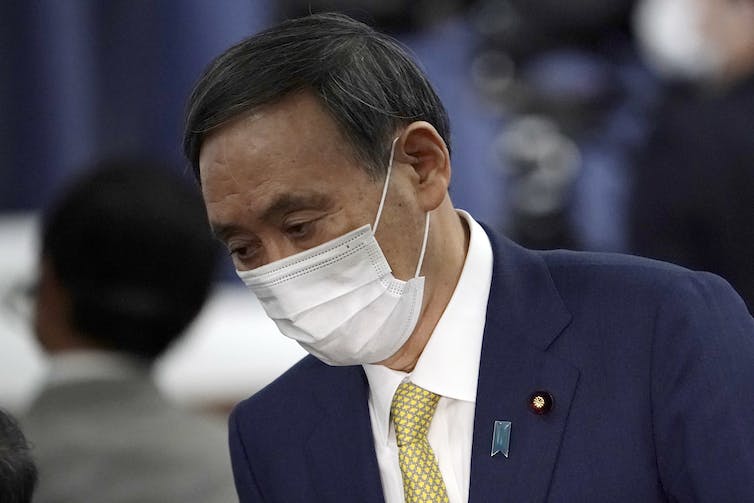 Suga now faces the task of guiding Japan and its economy through COVID-19. Eugene Hoshiko /Pool/EPA

Like Abe, Suga desires to resolve the longstanding issue of Japanese abductees in North Korea. He also has a difficult task to restore the dire state of relations with neighbour South Korea.

Suga also shares Abe’s unfulfilled goal of changing article 9 of the constitution to allow greater deployment of Japan’s Self-Defence Forces. His new cabinet will proceed with a controversial new defence doctrine, to acquire cruise missiles for pre-emptive strikes against potential threats from the Asian continent.

Suga has cautioned against an early election until COVID-19 is brought under control.

But there is already speculation a snap election could be called, possibly by the end of next month. This would stop the Constitutional Democratic Party of Japan from building on its recent reorganisation into a more united bloc.

The next election for the lower house of the Diet is due by October 2021, so at most, Suga only has a year to prove himself to be more than a caretaker prime minister.

He faces a leadership vote again in September 2021, under party rules requiring a ballot every three years for each regular term of LDP leader.

Internal rivals will seek another chance at the top job, particularly as the whole rank-and-file membership of the LDP will be allowed to participate in this vote. This may favour the generally more popular Ishiba.

If a larger field of candidates such as defense minister Taro Kono, or acting secretary general Tomomi Inada run against Suga, it is possible Japan could have yet another new prime minister by this time next year.