In the mid-1990s New Zealanders adopted electoral rules they hoped would end the tyranny of what Lord Hailsham once called the “elected dictatorship” of single-party majority government. And yet, a quarter century later, we are staring down the barrel of just that.

In the New Zealand parliament, which typically numbers 120 MPs, the threshold for this political grail is 61 seats. The latest polls indicate the Labour Party would exceed this number if it maintains its current popularity.

That’s significant because in parliamentary democracies single-party majority governments are powerful beasts, able to wield executive and legislative power without recourse to coalition or compromise with other parties.

Moreover, when the constitutional constraints on the (mis)use of executive authority are pretty feeble — as is the case here, with our dispersed constitution, limited scope of judicial review and unicameral legislature — such administrations have a propensity to go rogue.

During the 1980s and 1990s, governments of both the centre-left and centre-right displayed stunning levels of executive arrogance: routinely ignoring pre-election commitments, embarking on structural reforms without mandates, and making a virtue of taking “hard” decisions that enriched some and made life miserable for many.

So in 1993 voters changed the rules, ditching the old first-past-the-post (FPP) system, which regularly delivered outsized parliamentary majorities to either Labour or National, in favour of mixed member proportional representation (MMP).

Read more: The major parties' tax promises are more about ideology and psychology than equity or fairness for New Zealanders

Under the new system, providing a party wins at least 5% of the vote or one constituency seat (either Māori or general), its share of parliamentary seats is in more or less direct proportion to its support among voters.

That “more or less” is important. Depending on how many votes go to parties that fail to clear the threshold, a major party can win slightly less than a majority of the vote but still control a parliamentary majority.

For instance, last week’s 1 NEWS Colmar Brunton poll had Labour securing 62 seats on the basis of 48% support. That’s because the same poll showed a combined 7% support for parties that would not make it into parliament.

The eight seats represented by that so-called “wasted vote” would effectively be shared pro rata between the elected parties: Labour would pick up four, giving the party a majority. 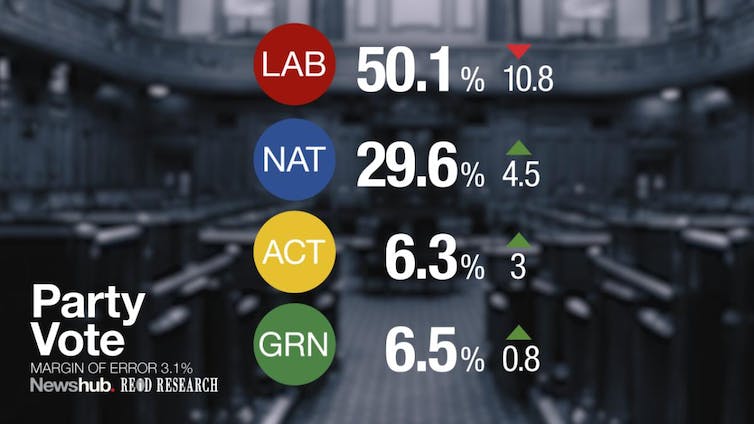 Electoral snapshot as at September 27: a single-party majority government is possible. Screenshot/Newshub-Reid Research

Would Labour form a coalition anyway?

There has not been a reputable poll since March that does not put Labour in a position to govern alone. For some, and not just those on the political right, this is a concern. New Zealanders have become accustomed to power sharing rather than the power hoarding that is the hallmark of single-party majority, winner-takes-all government.

But are we necessarily staring back to the future? If Jacinda Ardern wakes up on October 18 (or when the official results are announced on November 6) with a parliamentary majority, what might she do?

Read more: With the election campaign underway, can the law protect voters from fake news and conspiracy theories?

The cautious approach (and the prime minister is nothing if not cautious) would be to form an arrangement with another party. For one thing, it is useful to have someone else to blame when things go wrong (as they will).

Also, Ardern knows the support she and her party currently enjoy is unlikely to last for the next three (let alone six or nine) years. Voters shop around. The last time a party won an election with a majority of the vote was in 1951.

Labour has never won more than 41.5% of the vote under MMP. To become the natural party of government it will need allies for those times when its vote falls beneath what is required to govern alone.

Electoral snapshot as at September 22: even at 48% Labour could form a parliamentary majority.

The temptation to go it alone

The other option is to go full retro: throw off the handbrake of current coalition partner New Zealand First, put aside the Greens (assuming they make it back in) and go it alone.

That would be tempting: no need to share scarce executive slots, plus the ability to legislate unimpeded by the moderating constraints of multi-party government.

Across all eight MMP elections the average vote share of the highest-polling party has been 42%. But that figure is climbing. In the first four elections it was 39%, but across the next four it rose to 46%. Under MMP, that is getting very close to winner-takes-all territory.

In that sense, New Zealand has been flirting with a return to elected dictatorships since 2008. The go-it-alone option might not be the outlier it seems.

Underneath this lies the question of how executive power is constrained. Having changed the system to end a tradition of elected dictatorship, New Zealand may have to admit that the question has not yet been properly answered.