“We really are the only advanced democracy on Earth that systematically and purposely makes it really hard for people to vote,” President Barack Obama lamented in 2016. He was alluding to obstacles that, in some states, intentionally suppress voting.

Voter suppression measures in the US are again in the spotlight. As some Americans have already started voting in this year’s presidential election, President Donald Trump has without evidence raised the spectre of voter fraud, the central justification for voter suppression efforts in the modern age.

The forerunners of today’s sophisticated techniques for excluding minority voters have their roots in the post-Civil War 19th century. 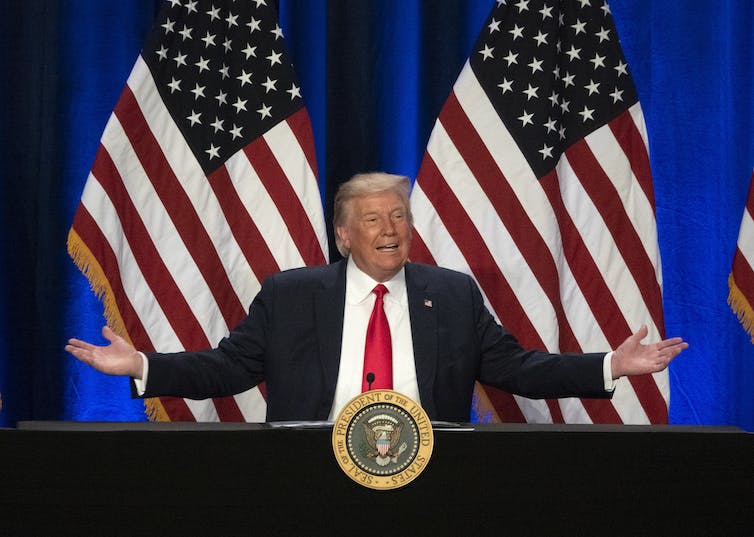 Tens of millions of Americans are expected to cast their ballot by mail this year, despite Trump’s attempts to discredit such voting. CRISTOBAL HERRERA-ULASHKEVICH/EPA

A white backlash in the post-Civil War south

After the US Civil War (1861-1865), millions of freed slaves participated in civil and political life for the first time. They could vote, sit on juries, attend school and hold public office.

With the withdrawal of northern troops from the south in 1877, this all changed. A reassertion of white supremacy, led by southern Democrats, aimed to strip African Americans of their right to vote.

Read more: The US presidential election might be closer than the polls suggest (if we can trust them this time)

As historian Carol Anderson has documented, a dazzling array of methods were devised to stop African Americans from voting in these 11 states.

Many of these lasted until the 1960s. They included literacy tests, “understanding clauses” (voters had to prove their understanding of the US Constitution to a registrar) and the use of poll taxes (essentially a voting fee). These measures were backed by violence and intimidation.

All of this had the desired effect. For nearly a century after the Civil War, the vast majority of African Americans were disenfranchised across the south. On the eve of the second world war, only 3% of southern Blacks were registered to vote.

The passage of the 1965 Voting Rights Act ended this national outrage by banning voter suppression methods. It established, in the words of President Lyndon Johnson,

a uniform standard which cannot be used, however ingenious the effort, to flout our Constitution. 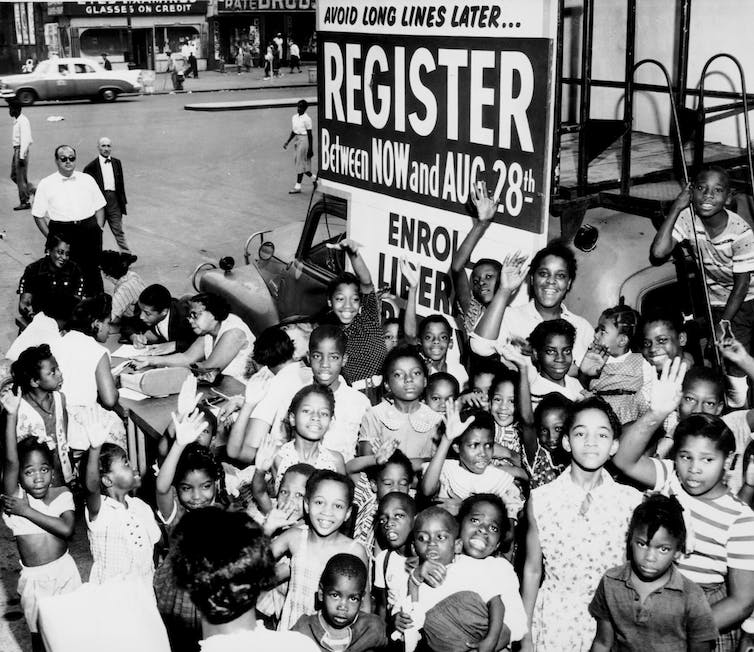 A campaign to register African Americans to vote in the 1960s. Kheel Center, Cornell University/Wikimedia Commons

A key provision in the act was “preclearance,” which required states with a history of discriminating against Black voters to seek federal approval to change voting rules and electoral boundaries.

The effects were immediate. That most basic of democratic rights, casting a vote, was extended to millions of African Americans across the south. Their levels of registration soared.

How minority voters are suppressed today

In 2013, however, the Supreme Court invalidated this provision in the Voting Rights Act, allowing those states to change their election laws without federal approval.

And voting rights for African Americans and other people of colour are again under attack, particularly in Republican-controlled states.

The new mechanisms of voter suppression display all of the ingenuity of their racist forebears, though expressed in race-neutral language that promises to safeguard against election fraud.

Read more: Trump can't delay the election, but he can try to delegitimise it

Onerous voter registration requirements are perhaps the biggest impediment to voting in many states. Government-issued photo IDs are now required in many states, which around 11% of eligible voters do not have. The numbers for African Americans and Latinos are much higher, at 25% and 16%, respectively.

The non-partisan Brennan Center for Social Justice documents how difficult it is for voters without a driver’s licence to acquire an ID.

In the 10 most restrictive voter ID states, it estimates more than 10 million voters, or 17.5% of voting-age citizens, live more than 10 miles from the nearest state ID-issuing office. Most of these states have poor public transport infrastructure, creating a massive hurdle for many poor voters to get registered.

In Georgia, proof of citizenship is required to vote. To register, a voter must produce a birth certificate or passport, plus a social security number or a W-2 form (a tax document filed by employers). Again, many voters of colour and young Georgians cannot readily access these documents. 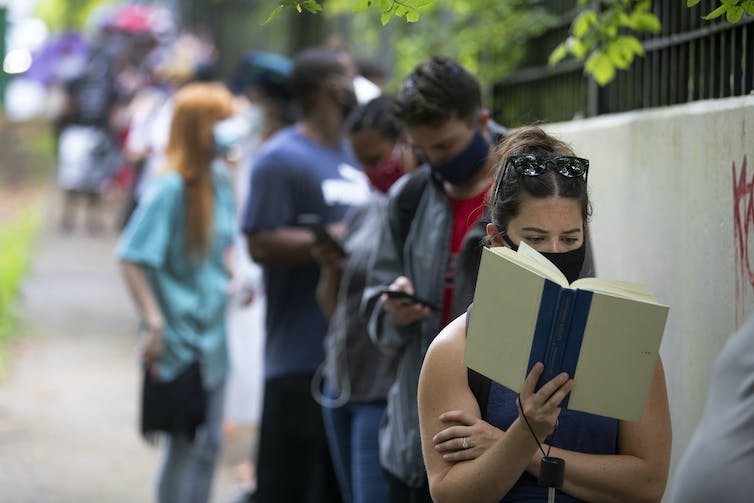 A line to vote in Georgia earlier this year. John Bazemore/AP

Wisconsin changed its law to require voters to present a state-issued ID to vote, even if they are already registered. One study estimates some 200,000 more people may have cast a ballot in the 2016 presidential election if the law had not been in place. Democratic contender Hillary Clinton lost the state by less than 23,000 votes.

Other states accept some forms of photo ID but not others. Texas accepts handgun licences, for instance, but not university student IDs.

Nearly all states also disenfranchise convicted felons, preventing 6.1 million people from voting. One in 13 Black people of voting age have been disenfranchised under such laws, a rate more than four times greater than that of non-African Americans.

Another growing area of voter suppression involves purging voter rolls in ways that are systematically biased against minorities and young people. The Brennan Center found 17 million voters were purged nationally from 2016–18, with higher rates in parts of the country that have a history of discrimination in voting.

Then there is the matter of lack of polling booths. A study of the 2016 election found those in majority Black neighbourhoods were 74% more likely than those in white neighbourhoods to have to wait for more than 30 minutes to vote.

This is by design. Since the 2013 Supreme Court decision weakening the Voting Rights Act, hundreds of polling locations have closed across the south and elsewhere, many in states with a history of racial discrimination.

Now, the Trump campaign is waging another battle: trying to block mail-in voting and other state laws and policies designed to help voters cast ballots remotely during the pandemic. 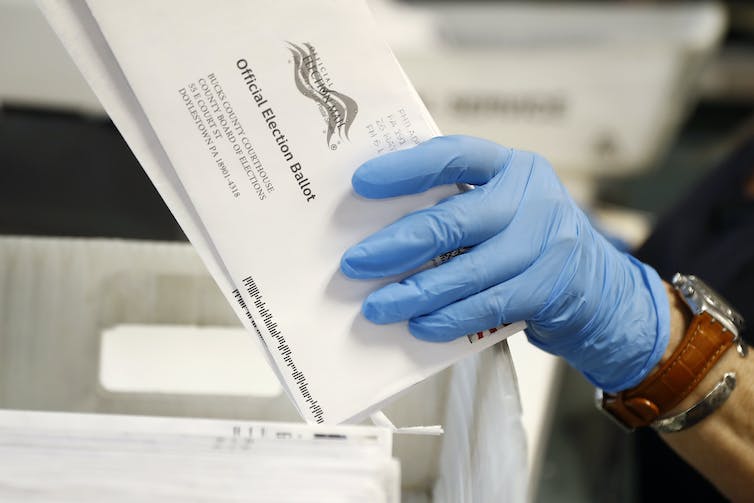 While Trump has attacked mail-in voting, his campaign has tried to convince his supporters the method of voting is valid and safe. Matt Slocum/AP

A growing movement has begun to push back against voter suppression. Groups like Black Voters Matter and Voto Latino are organising tirelessly to circumvent tighter voting rules and other obstacles to get people to the polls.

They have had some success. In Republican-controlled Alabama, one of the hardest states in the US for Black people to vote, an unexpectedly high Black turnout in 2017 helped Democrat Doug Jones win a special election for the US Senate. 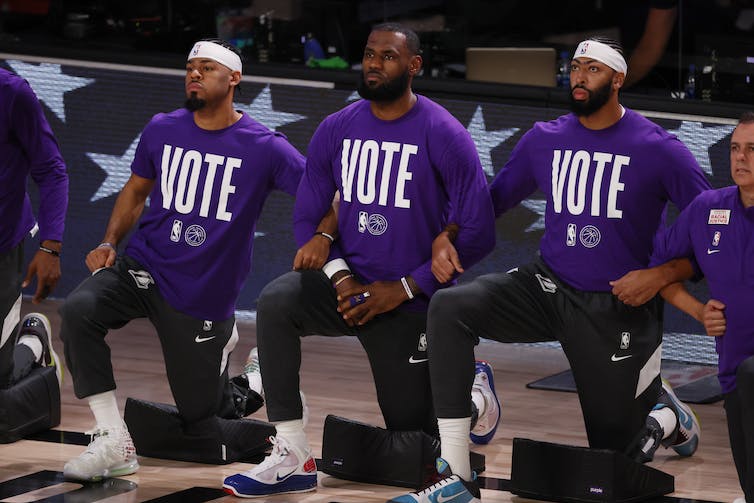 Such organisations reflect growing public opposition to voter suppression. Even in Florida, which has one of the harshest felon disenfranchisement regimes, voters approved an amendment to the state constitution to restore voting rights to 1.4 million convicted felons.

The Republican-led legislature passed a new law presenting another hurdle — felons had to pay off all their fines to vote — but last week, billionaire Michael Bloomberg donated US$16 million to a fund designed to help them do that.

Despite these glimmers of hope, there are still too many obstacles to voting that would not be tolerated in any other democratic country. If Trump is re-elected in six weeks, it could at least partially be due to the suppression of voters who overwhelmingly support his opponent.

Read more: As concerns mount over integrity of US elections, so does support for international poll monitors