Spring has arrived, and all over the country the hills and riversides are burnished with the green and gold of Australian wattles, all belonging to the genus Acacia.

It’s a spectacular sight, but not a surprising one as there are about 1,000 Australian species in the Acacia genus ranging from very small shrubs to tall, longed-lived trees. They occur in ecosystems from the arid inland to the wet forests of the east coast.

Read more: Tree ferns are older than dinosaurs. And that's not even the most interesting thing about them

Wattles have been widely used by Indigenous people for millenia, and celebrated by “Wattle Day” on September 1 for more than a century.

But their lineage may be much older. Australian wattles have relatives in Africa, South America, India and parts of Southeast Asia. This distribution suggests the wattles may have originated in Gondwana before the super-continent fragmented about 180 million years ago.

So let’s take a closer look at what makes these iconic flowers so special. 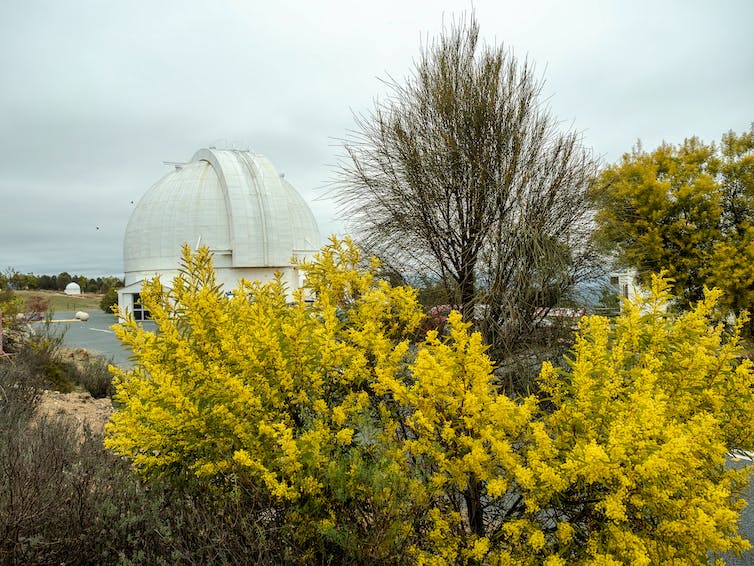 Not everyone welcomes the wattles’ golden blooms — many blame wattle pollen for their hay fever or asthma.

However, many species of wattle have aggregated pollen, which means it’s very heavy and tends to fall straight to ground. You have to be virtually under the plant for it to affect you.

They can cause trouble, but it’s more likely your allergy is due to some other inconspicuous plant, such as grass, that you haven’t noticed compared to the bright yellow of the wattles. It’s worth having an allergy test.

While a majority of wattles flower in spring and summer, a significant group — such as the sunshine wattle (A. botrycephala), Gawler Range wattle (A. iteaphylla) and flax wattle (A linifolia) — flowers in autumn and winter. This can give the impression in some places that they’re flowering year-round.

What’s more, many species are hardy, and they can help in the process of taking nitrogen from the air and adding to the soil. That means they can be very handy in ancient, nutrient-poor Australian soils. 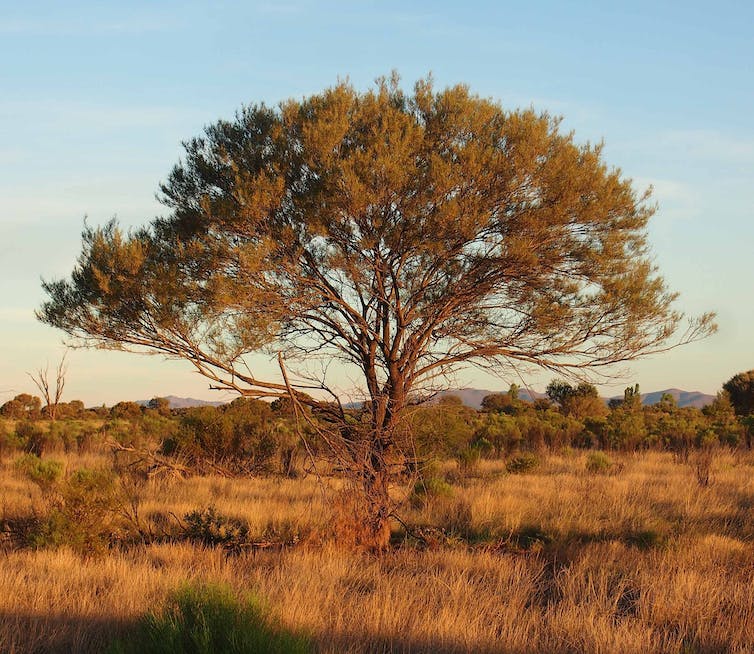 Mulga grows over about 20% of our continent. Mark Marathon/Wikimedia, CC BY-SA

Many of the smaller shrub wattles may live for only a decade or so, but some, such as mulga (Acacia aneura) can live for centuries and are crucial to the viability and stability of arid inland ecosystems. They can have surprisingly large and deep root systems for such small shrubs or trees. This is to obtain water, but also binds the soil.

However, mulga-munching horses, cattle and other feral grazers threaten the persistence of mulga-dominated communities. If mulga and other inland Acacia species are lost, the soils can become loose and mobile, which results in stable productive land becoming desert.

By any other name

In the early 2000s, there was fierce debate among plant taxonomists about how closely the African and Australian species were related.

The name “Acacia” rightly belonged to the African group, but because there were so many Australian species that would need to be renamed, Australia was allowed to keep the name “Acacia” in 2011 — much to the chagrin of foreign taxonomists.

This resulted in the genus being divided. Australian wattles stayed as Acacia, but African wattles are now in the genera Vachellia or Senegalia, and those from the middle Americas (around Mexico) are Acaciella and Mariosousa. 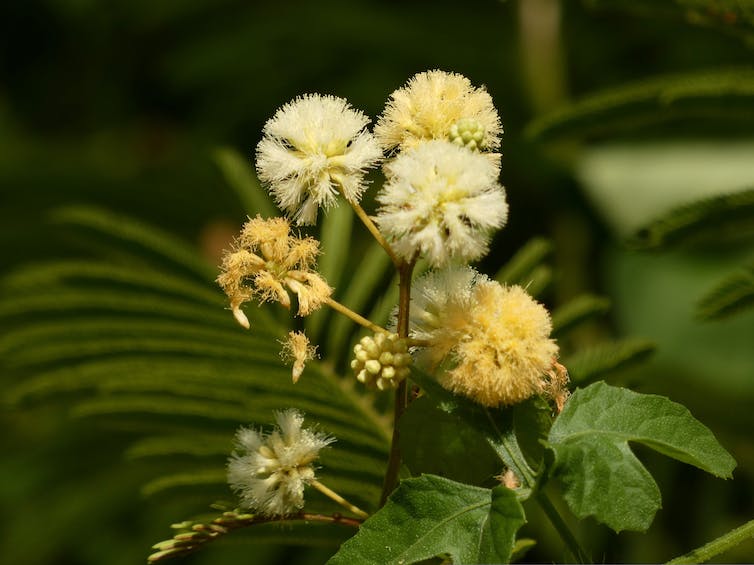 There are also weedy wattles in Australia and elsewhere. Many of us know from hard experience that the splendid ornamental tree, Cootamundra wattle (Acacia baileyiana), can become a weed if it grows outside its very restricted natural range in New South Wales. And Australia’s black wattle (A. mearnsii) is a significant weed in other parts of the world.

It can come as a bit of a blow to know Australia’s floral emblem, golden wattle (A. pycnantha), can be weedy both at home and when it travels abroad (perhaps like some Australians).

Read more: The black wattle is a boon for Australians (and a pest everywhere else)

Interestingly, most of the Australian wattles lack thorns, unlike their relatives in Africa. In Africa, thorns protect the plants from large mammalian grazers such as giraffes.

If you don’t like ants, it might be worth checking which species of wattle you have in your backyard, or intend to buy.

Many wattles have a very special relationship with some insects. In Central America, ants penetrate the thorns of Bulls Horn wattle trees and establish their colonies. They then defend the tree against other insects, and if branches of another tree touch the host tree, the ants will cause such damage that the other tree will die back. 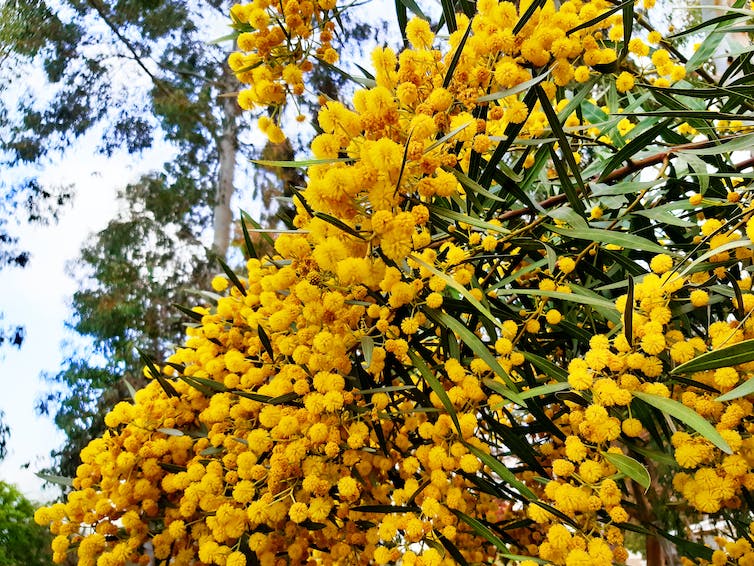 There are more than 1,000 species of wattle in the Acacia genus. Shutterstock

In Australia, the relationship between ants and wattles is based on food. The hard wattle seeds have a tasty and oil-rich outgrowth called an “aril”, which is irresistible to some ant species.

The ants harvest the seeds and take them back to their nest, where they’re safe from other hungry grazers until it is damaged by fire or flood and the seeds germinate.

Read more: Why tiny ants have invaded your house, and what to do about it

Some wattles, the mulga among them, have little glands at the base of their phyllodes (the modified leaf stalks). These glands secrete a form of sugary syrup that attracts feeding ants. These ants may also protect host trees or perhaps leave the flowers alone to allow a greater seed set to grow.

It’s clear wattles have a lot going for them. They are diverse in number, habit, size, longevity and flowering season — there’s a wattle for every occasion. For all of these great traits, it’s still that green and gold that endears them to Australians.

The recent reelection of the Jacinda Ardern-led Labour government in New Zealand offers leaders elsewhere a potent lesson about how best to respond to COVID-19. Saving lives is, not surprisingly...

why we need children's life stories like I Am Greta

When a young celebrity writes a memoir or has a biography written about them, a common response is: they are too young. This child or adolescent cannot possibly have lived...

Asian countries do aged care differently. Here's what we can learn from them

ShutterstockThis article is part of our series on aged care. You can read the other articles in the series here.Unlike in Western countries like Australia, traditional Asian cultures place a...

Japan plans to dump a million tonnes of radioactive water into the Pacific. But Australia has nuclear waste problems, too

The Japanese government recently announced plans to release into the sea more than 1 million tonnes of radioactive water from the severely damaged Fukushima Daiichi nuclear plant.The move has sparked...

shutterstockThis week the United States Department of Justice (DoJ) filed a lawsuit accusing Google of using “anticompetitive tactics to maintain and extend its monopolies in the markets” for search...

10 tips for hosting a COVID-safe wedding

ShutterstockSpring and summer in Australia and the gradual easing of restrictions means we can expect weddings, with more guests, back on the calendar.However, any wedding you plan or attend will...

Shutterstock/ChameleonsEyeNew Zealand’s public health response to the COVID-19 pandemic may be the envy of the world, but as the new government looks ahead, potentially with a more progressive lens, it...

ms.nen/ShutterstockLet’s talk about “city deals”. The Australian government is.Its department of infrastructure website describes them as “a genuine partnership between the three levels of government and the community to work...

Morrison's promised integrity commission can't hide behind COVID much longer – can it?

The government can act super-fast on integrity issues when it wants.On Thursday a Senate estimates committee was told the government-owned Australia Post bought Cartier watches worth $3,000 each for four...

ShutterstockWhat’s the difference between an independent and non-independent director?This question lies at the heart of the scandal embroiling Crown Resorts, Australia’s largest gaming company, which owns casinos in Melbourne and...

E-prescriptions are coming. But what are they? And is this the end of paper ones?

ShutterstockElectronic prescriptions (or e-prescriptions) are being rolled out in stages across Australia after being used in Victoria during the pandemic.E-prescriptions have been common in countries such as the United States...