There’s no denying the popularity of the singlet. The Chesty Bond, Australia’s best known singlet, has notched up more than 350 million sales. At last year’s Deniliquin Ute Muster, more than 3,970 blue singlets were counted.

Donned first as underwear, then for sport and later as the uniform of Australia’s working man, this simple garment has accrued complex cultural meanings over time.

Singlets have been famously worn by rock stars such as Jimmy Barnes and evolved into an item of gay dress.

Now worn by men and women alike, for sport, labour or leisure, they have a long and fascinating history.

The first singlets were concealed beneath clothing. The Workwoman’s Guide, a pattern book and instructional guide for making everyday clothing, was published in London in 1838. Though it contains the details for an extraordinary range of undergarments, it makes no mention of singlets.

Two years later, however, Mr Samuel Lyons advertised an auction of 40 cases of slop clothing in Sydney. Among the slops (relatively cheap, ready-made clothing) were 13 cases of plaid and velvet vests, short fitted coats called coatees and flannel singlets. This may be the earliest reference to the undergarment in an Australian newspaper.

Read more: A brief history of briefs – and how technology is transforming underpants

Australian gold-rush guides of the 1850s advised adventure-seeking migrants on the ideal clothing in which to seek their fortune. One helpfully suggested a digger’s outfit include two or three shirts, three pairs of trousers, a warm jacket and “two or three flannel singlets”. 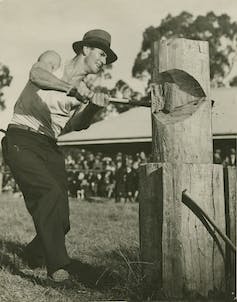 These singlets formed a soft, warm, washable layer between men’s torsos and their outer clothing. However shirts, too, were considered underclothing at this time, serving a similar function.

In the second half of the 19th century, singlets emerged from beneath men’s clothes. Athletes, including pedestrians (competitive walkers or runners), wrestlers, wood-choppers and rowers, wore singlets openly for the first time.

This shocked some observers and intrigued others, who commented on the athletes’ magnificent physiques. Yet the benefit of wearing this simple, streamlined garment was clear. Singlets freed the shoulders and arms, enhancing movement.

Unsurprisingly, singlets were adopted by Australia’s working men shortly after.

Queensland’s colloquial term for the singlet, the “Jackie Howe”, takes its name from the shearer said to have bared his arms while setting new daily shearing records in 1892. In fact, it’s more likely he wore an undershirt. Later reports suggest he variously cut or tore the sleeves off his shirt, or perhaps did neither, merely inspiring another shearer to do so. At any rate, the name stuck, in Queensland at least. 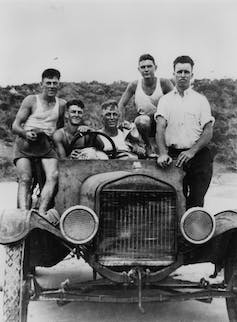 Over the following decades, singlets became a distinctive element of the Australian work costume. During the first world war, soldiers were issued two singlets as part of their kit.

In the 1920s and ‘30s, close-fitting cotton “athletic” singlets were donned by timber cutters, construction workers and others involved in outdoor labour, most often paired with trousers and leather boots.

By the second world war, singlets were worn for sport and physical training and at rest.

Artist William Dobell, working for the Civil Construction Corps, painted several wartime images of workers clad in singlets, shorts and little else. One such painting, Concrete consolidation worker, Sydney graving dock (1944), depicts a man in shorts and a loose, white singlet, his body protected by a hat, gloves and work boots. 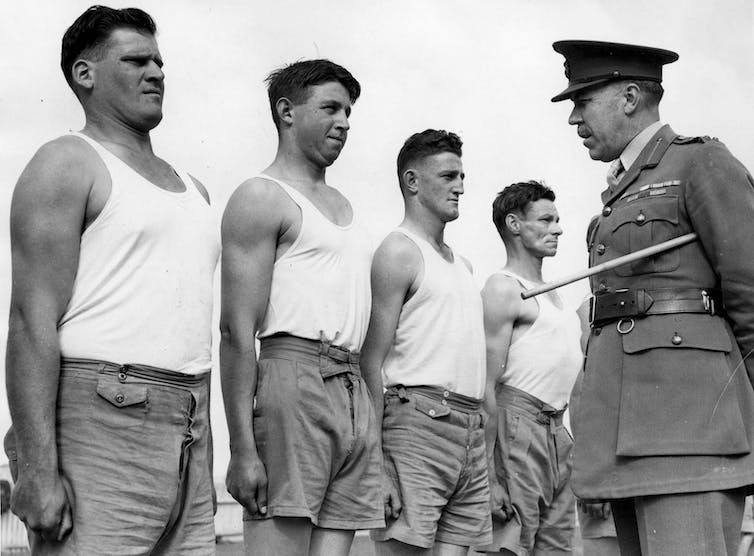 As this form of Australian masculinity took shape — strong, bronzed, well-built workers stripped down to their singlets — Bonds developed its Chesty Bond character.

He appeared in regular comic strips in Sydney’s Sun newspaper from March 1940. Slipping on a singlet exposed Chesty’s superhero-like form, but more importantly let his “great muscles work unimpeded”, as one cartoon put it. The image of Chesty Bond, with his distinctive jutting chin, powerful chest and rippling torso, still appears on the singlet’s packaging today.

Beyond the working man

The singlet’s symbolism had solidified as shorthand for the everyday working man by the mid-20th century. In the 1970s and ‘80s, pub-rock musicians drew on this connection, referencing the working-class roots of the music and their singlet-wearing fans.

At the same time, gay men began wearing singlets. The look, which first emerged in America, referenced tough, “macho” men. Combined with tight jeans and plaid shirts, singlets were an assertion of hyper-masculinity.

In the 1990s, singlets were recast again when underwear was embraced at gay clubs and dance parties. The singlet set off hard, smooth bodies, sculpted at the gym.

These examples point to the power of singlets to suggest a strong, rugged, muscular Australian masculinity. But singlets, too, have a darker side. Their ready association with hard-working and hard-drinking men has led to another particularly troubling, colloquial name: “the wifebeater”.

How you wear your singlet is a marker of class. White-collar workers wear singlets as often as their blue-collar counterparts, though theirs often remain unseen (at least at work), under business shirts and suits. 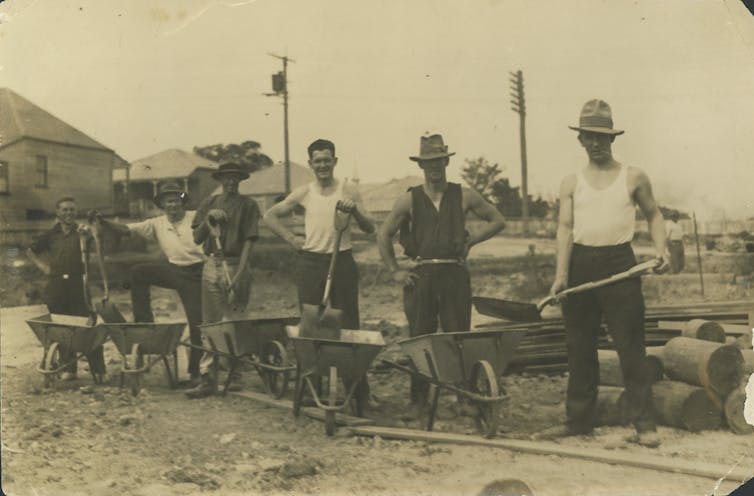 Labourers in their singlets posing with shovels and wheelbarrows, circa 1923. State Library of Queensland, 2563-0001-0011

Women’s sleeveless undergarments, including chemises and camisoles, were worn in the 19th century and “ladies’ singlets” were advertised in Australian newspapers by the 1880s.

It took longer for women, though, to bare their arms in the range of settings that men did. Singlets were dotted through the crowds — on both young men and women — at popular music festivals like Sunbury in the early 1970s. 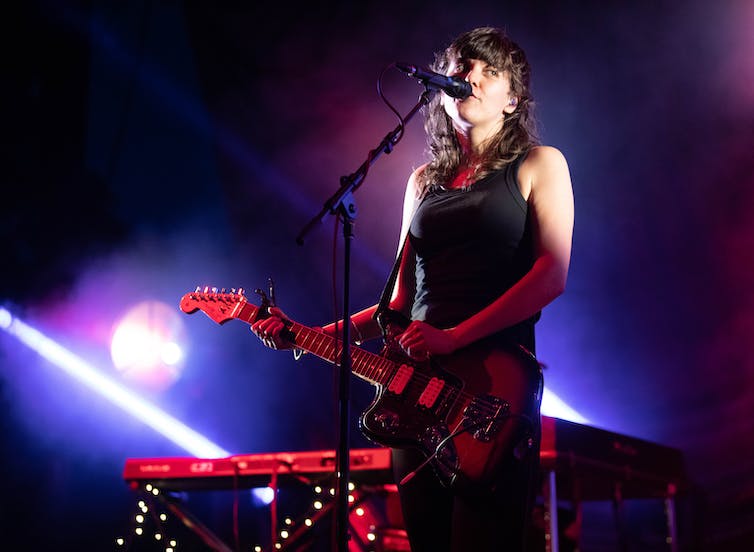 Melbourne photographer Rennie Ellis, a prolific documenter of daily life and by extension daily dress, captured many singlet-wearing women in his images, particularly during the 1980s.

In 2005 Akira Isogawa, one of Australia’s most creative contemporary fashion designers, remade the humble Bonds singlet, stitching an extravagant panel of vividly embroidered red and purple flowers on its front. The singlet had become high fashion. 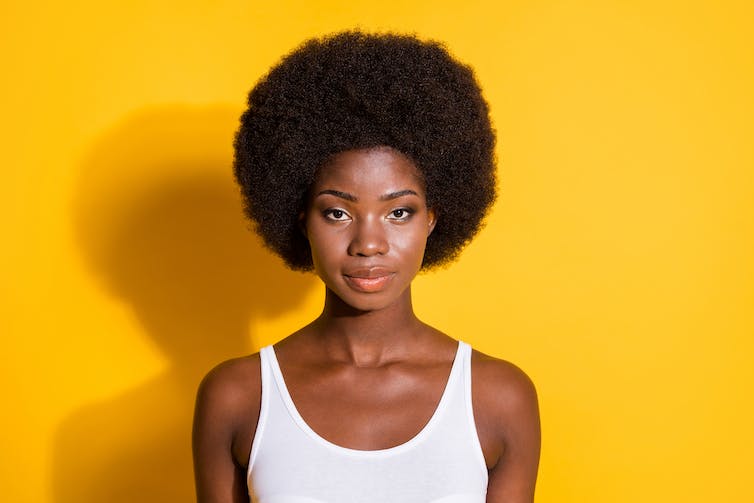 Singlets are popular with women too. shutterstock

Singlets are now as popular with women as with men. Our preoccupation with physical fitness and gym-ready bodies has seen a huge range of Australian and international brands enter the singlet market. Singlets made as active wear have special breathable, sweat-wicking properties.

For our Olympic athletes, singlets have been green and gold. The National Museum of Australia recently acquired 1969 silver medallist Peter Norman’s singlet, while other Olympic singlets appear in museum collections around Australia. But on the local oval or at the gym, in the pub or in the backyard, singlets of all colours reign.