News of storms battering parts of Queensland and the threat posed by Cyclone Kimi reminded me of a recent experience I’d had.

A few months after Cyclone Marcus unleashed havoc on Darwin in 2018, uprooting trees and causing million of dollars worth of damage, I had reason to visit a local caravan park.

I was there to pick up an item I’d bought on Facebook Marketplace from an older long term resident of the park, Anne*, and we got talking about the cyclone.

She described how tents were blown away, property lost and that “none of us were insured, really. So we have to be on our own”. Other Darwin caravan park residents had had their caravans crushed by falling trees, and were similarly uninsured.

These stories are anecdotal, but illustrate a broader problem. Communities living at the margins are often more vulnerable to disaster risk, a problem likely to be exacerbated by climate change. 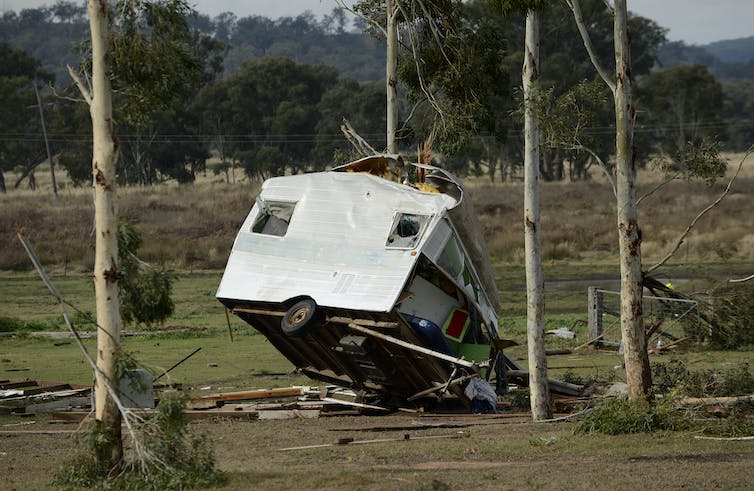 People with long-term tenure at caravan parks may be at risk when disaster strikes. DAN PELED/AAP

People with long-term tenure at caravan parks likely experience higher levels of disadvantage than the population as a whole; many are unemployed or in lower paying jobs, and contending with serious health issues.

As one report published by the St Vincent de Paul Society NSW put it:

Caravan park residents often experience high levels of violence and abusive behaviour, substance abuse and addiction, problem gambling, mental illness and poor physical health in an unsupported environment. A common factor among many residents is a desperate feeling of loneliness.

Many also often live with the threat of heat stress, floods, storms and cyclones. Many are underinsured. Some residents have reported trouble trying to get insured.

Research has identified an urgent need to maximise safety and minimise property exposure at Australian caravan parks. An article published in the Australian Journal of Emergency Management noted:

Not all people will have the capacity to insure against flooding and often the very poorest of people will seek accommodation in caravan parks because of the low rents. However, the caravans, in which they live and contain their valuables, are structures that are more likely to be severely damaged as against the more permanent structures of contemporary houses.

Some of this increased risk is due to the location of caravan parks. As a state engineering consultant put it in one study,

things like caravan parks or holiday parks are often proposed to be located in areas that wouldn’t normally be considered for normal residential development […] There is often a push to have that sort of development in these low-lying, vulnerable areas.

One study on caravan parks in coastal NSW found many were highly exposed to flooding and that:

many parks are ill-equipped to deal with flooding: a high turnover of park managers means that most have no direct experience of floods; attitudes of denial prevail; most parks have no means of raising community flood awareness; and the process of flood response planning is patchy and of poor quality. 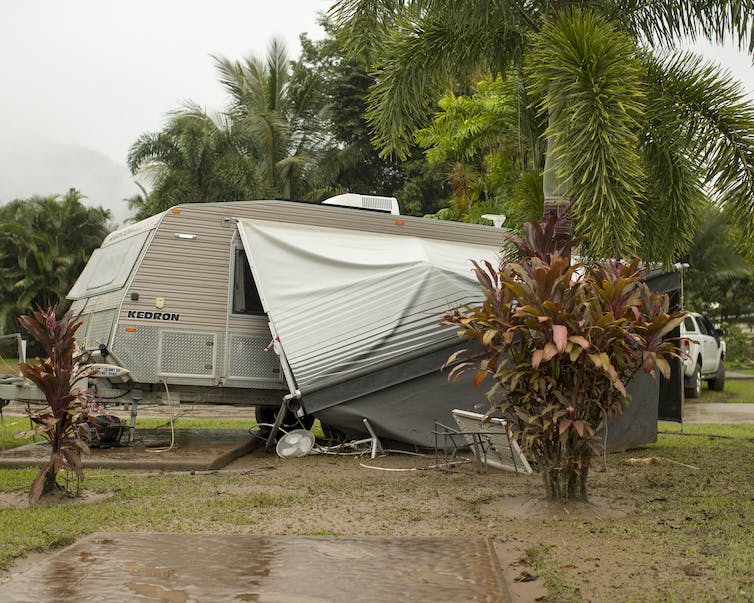 Change is possible — and necessary

One study called for more regulation of parks and for park managers to be better equipped with the skills to manage disaster risk.

Urban planners in cyclone-prone areas could look to research on which tree species are most “wind-firm” and least likely to be uprooted in a cyclone — and use this information to inform urban planting strategies. Simply advising caravan-dwellers not to park under trees won’t work, as trees provide much-needed shade to offset heat.

Finding better ways to reduce risk of heat stress to long term caravan residents will grow only more important as the climate changes. 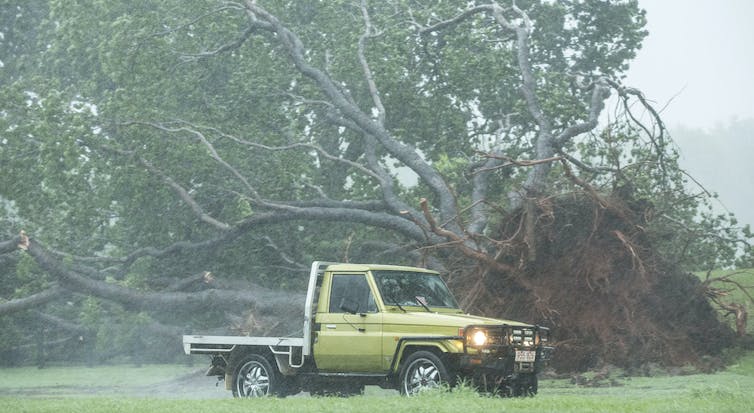 Cyclone Marcus wreaked havoc on Darwin in 2018, uprooting trees and causing million of dollars worth of damage. GLENN CAMPBELL/AAP

Too often, management of private caravan parks is seen as a problem for private property owners.

But as some researchers have pointed out, caravan parks sometimes operate as a form of social housing, and often house vulnerable populations.

Name changed to protect identity. This story is part of a series The Conversation is running on the nexus between disaster, disadvantage and resilience. You can read the rest of the stories here.