In the past five years, the number of overseas-born migrants from India grew more than any other group in Australia, increasing from 449,000 to 721,000. Indian residents leapfrogged New Zealand-born and China-born migrants in the 2020 government figures to rank second in the country, behind only those from England.

Despite their increasing numbers and growing political voice, it appears those of Indian origin still do not matter enough in the mainstream Australian public sphere.

This is most apparent in the recent travel ban imposed by the federal government on flights from COVID-ravaged India. Not only are Australian citizens prohibited from entering their own country, they also risk fines of up to $66,000 or five years’ jail time if they attempt to do so.

This has left stranded 9,000 Australians who have signalled an interest in returning home, including 650 classified as “vulnerable”. Critics have decried the punitive nature of the travel ban as racist.

After attacks, a stronger voice

People of Indian descent have long experienced discrimination and racism in Australia.

In 2009–10, a series of savage attacks on Indian students in Melbourne shook the community and resulted in widespread protests, blanket coverage in the Indian media and plummeting student enrolment numbers. 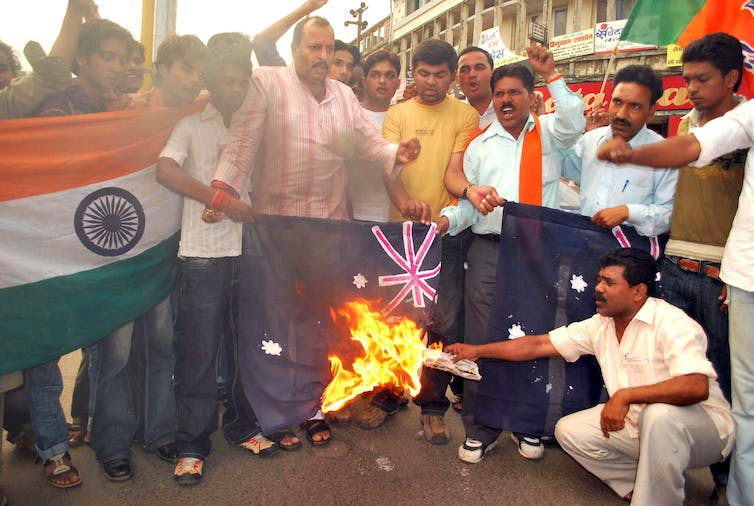 Protesters burn an Australian flag in response to the attacks on Indian students in Melbourne. SANJEEV GUPTA/EPA

The racially motivated attacks were significant enough to force the Australian government to apologise and compel then-Prime Minister Kevin Rudd to mend diplomatic relations by making a visit to India and setting up the Australia India Institute.

It was widely thought at the time that Rudd did so to rescue the Australian higher education industry, which had become increasingly reliant on international students from India.

In 2013, my colleagues and I organised the first conference of the Indian diaspora in Australia. This was in response to an Australia India Institute report in the wake of the student attacks, which found the Indian-Australian community was not politically active and “flying under the radar”.

My research on the attacks showed the Indian-Australian community had in fact transformed from being “de-wogged migrants” to “rabble rousers”. This means that due to India’s greater economic strength on the global stage, those migrating to other countries have higher levels of pride in their home country. This, in turn, makes them more likely to speak up against perceived discrimination in Australia.

Why do Indian-Australians feel singled out now?

The current crisis over Australian residents being stranded in India has not elicited a similar reaction from the government.

Even though the nation’s chief medical officer has warned Australians could die during the travel ban — and doctors, human rights groups and the Indian-Australian community have forcefully criticised the move — Prime Minister Scott Morrison has stood firm.

How can such a decision be explained? Some commentators have said the government is trying to deflect attention from the failures of its own quarantine system by introducing such a punitive measure on health grounds.

Read more: The crisis in India is a terrifying example of why we need a better way to get Australians home

The real question is why those flying from India are being singled out. Such drastic steps were not in place when the US, the UK and Europe were going through similarly deadly and infectious COVID outbreaks in the past year.

One possible explanation is the Indian community in Australia is simply an easy target, especially when India is in an unprecedented crisis. Indian officials and media are likely to be preoccupied with more pressing domestic matters and may not complain about the treatment of Indian-Australians the way they did during the student attacks a decade ago.

And despite the Indian-Australian community growing in size in Australia and being increasingly represented in the media and politics, it appears those of Indian origin are still largely perceived as an “other” or a “model minority”.

Indian-Australians and their allies have more platforms than ever to express their legitimate anger over the travel ban, but that doesn’t mean those in power are listening.

How the Indian community can amplify its voice

On the one hand, the Australian government ought to have learned the lessons of the Melbourne student attacks and should take the lead in changing negative perceptions of its multicultural communities.

This is more important than ever with the rise of racist incidents towards Asian people since the onset of COVID.

Even before the pandemic, those of Indian heritage living in Australia reported experiencing high levels of “subtle racism” in their everyday lives. Anecdotally, this can range from being told to “go back to where you came from” in public places, to being asked to prove one’s worth and qualifications when carrying out jobs that are not regarded as stereotypically “Indian”.

On the other hand, there is still more the Indian diaspora could do to have a political voice that is take seriously in times of crisis. This is not just about speaking up for one’s own interests through formal political representation. A political voice can be achieved in other ways, such as

While there is more work to be done by the Indian diaspora in Australia to be politically proactive, it does not absolve elected leaders of the responsibility they owe to all Australian citizens to protect them. Migrants report increased feelings of belonging and civic engagement when they feel cared for.

Read more: The problem with Apu: why we need better portrayals of people of colour on television