Mothers have often been associated with conservatism: linked to cloyingly sentimental cultural ideals or depicted as victims of patriarchal oppression.

In the 19th century, the middle-class mother was idealised as the “angel in the house”, while during the boom years after the second world war she was depicted as a devoted homemaker in her suburban castle.

During the 1970s, second-wave feminists thoroughly critiqued the relegation of women to childrearing. This left some with a lingering sense that becoming a mother was an old-fashioned or politically regressive choice. 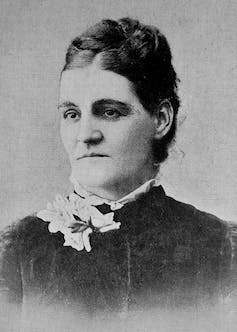 Louisa Lawson used her status as a mother for political clout in the ‘woman movement’. National Library of Australia

But in fact there is a long tradition of maternal radicalism in Australia. Mothers have been out on the streets, fighting for change, as frequently as they have kept the home fires burning. This tradition still thrives in the present day – as we saw recently when thousands of women joined the March4Justice to protest against gendered violence, often accompanied by their daughters and sons.

Mothers of the “first wave” of feminism in Australia were staunch advocates for social change.

The “woman movement” emerged in the late 19th and early 20th centuries, led by feminists such as Louisa Lawson and Rose Scott. Activists drew on their status as mothers as the basis for their progressive political demands to grant married women rights over property, custody and inheritance, as well as voting rights.

If we are responsible for our children, give us the power and sacredness of the ballot, and we will lift ourselves and our brothers to a higher civilisation.

The effectiveness of these maternal activists was proven in 1894 when South Australia became the first electorate in the world to give women the vote.

Further evidence of the political power of first-wave feminists came in 1912, when the Commonwealth government approved the Maternity Allowance. This was radical in using government funds to provide state support to mothers as citizens, undercutting the authority of their husbands.

Read more: Mothers explain how they navigated work and childcare, from the 1970s to today

In the 1960s and 1970s, while women’s liberation movement activists such as Merle Thornton, Marcia Langton and Zelda D’Aprano were demanding equal rights for women, middle-class mothers around Australia were quietly rebelling against the medicalisation of pregnancy, childbirth and breastfeeding.

Meanwhile, the so-called natural childbirth movement sought to counteract the medicalisation of birth. Through groups like the Childbirth Education Association, reformers fought to grant women more information and choice about childbirth. They also worked to make the experience less frightening by creating more welcoming birthing spaces and allowing support people to attend labour. These are all changes we now take for granted.

Their legacy continues today through groups like Birth for Humankind, which provides childbirth support for disadvantaged women and supports Birthing on Country for Aboriginal and Torres Strait Islander women.

Maternal protest continues in the 21st century. Amid the swelling ranks of environmental groups like Extinction Rebellion (XR) and Australian Parents for Climate Action (AP4CA), mothers and grandmothers (as well as fathers and grandfathers) are particularly prominent. Like the maternal activists who came before them, these women base their political claims in their care relationships with children.

One XR member and grandmother explains,

I don’t have a choice. If you see your loved ones coming to harm you protect them.

For this year’s Mother’s Day […] my wish is for the Australian government to take genuine action on climate change so that we, Mothers across Australia, can continue to raise our children, knowing that they will have a future worth living for. 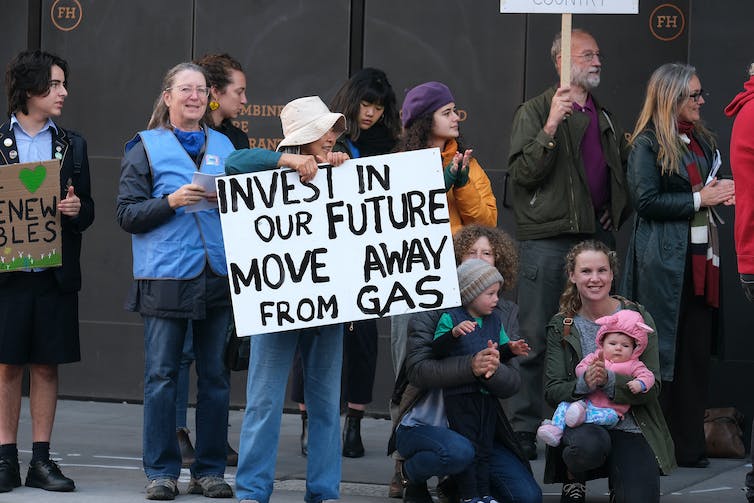 Mothers are often at the forefront of protests demanding action on climate change. AAP/Luis Ascui

Knitting Nannas Against Gas was founded in the Northern Rivers region of New South Wales and has since spread around the world. Their “Nannafesto” explains that they base their opposition to the exploration and mining of coal seam gas and other non-renewable energy sources in their position as grandmothers, and their desire to “save the land, air and water for the kiddies”.

Mothers have a long history of political activism not just in Australia, but around the world. The caring for children that mothers perform is of course of the utmost significance. But to assume that mothers are essentially apathetic, passive or uninterested in issues beyond the home is to drastically underestimate their potential.

Not only are mothers politically active, but their causes are diverse, from economic and political rights, to childbearing and reproductive reforms, to environmental concerns.

After all, anything that threatens the present and future worlds their children will inhabit matters deeply to them.