The London launch of Sgt. Pepper’s Lonely Hearts Club Band in May 1967 was a musical and fashion landmark. While the clothes worn by all four Beatles startled the journalists and disc jockeys, John Lennon stole the show. He wore a green, frilly, flowered shirt, maroon corduroy trousers, canary-yellow socks, corduroy shoes with two particularly unusual additions. One was a leather sporran, the other an Afghan sheepskin coat, worn with the fur inside and the skin outside, which was tanned yellow and embroidered with big red flowers down its front and sleeves. 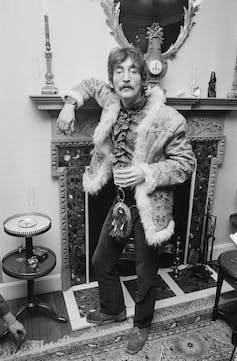 John Lennon wore an Afghan coat and a sporran at the press launch for the Beatles’ Sergeant Pepper’s Lonely Hearts Club Band album, held at Brian Epstein’s house in May 1967. John Downing/Getty Images

These coats became a craze with extraordinary longevity. “Afghans”, as they were often called, were worn by many celebrities through the late 1960s. Then, for the best part of a decade, they became standard youth clothing — an archetypal hippie garment and emblem of the counterculture.

They had a resurgence inspired by Penny Lane’s character in the 2000 film Almost Famous and remain a favourite among lovers of bohemian fashion on Instagram.

Their embrace internationally transformed where and how the coats were made and what they looked like. Yet the craze for these coats could only happen because Afghanistan’s relationship with the rest of the world was changing.

In a gendered division of labour, men cured the skins, tanned them yellow with the rinds of pomegranates, cut them into pieces and sewed them together, while women and girls embroidered them with geometric and floral designs, usually in red or yellow. Their skins were occasionally bear, fox or goat, but usually karakul (a long-haired breed of sheep).

Although often written about as if only men wore them, women did too, and they were such ubiquitous winter-wear they were considered Afghan national dress. 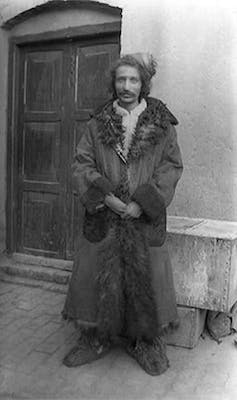 The poor could typically afford only the smaller pustinchas or pustakis. If they bought the bigger pustins, these coats were usually plain which made them cheaper.

Their prime source was Ghazni, south of Kabul. In 1955 British archaeologist Sylvia Matheson found “one shop after another offering nothing but pustin” there.

While entranced by those with white fur, Matheson rejected them as impracticable for her fieldwork that winter. Instead, she opted for a brown-furred pustincha that was still “enchanting, the yellow skin entirely covered in closely stitched flowers of pillar-box red, with here and there a spot of periwinkle blue”. 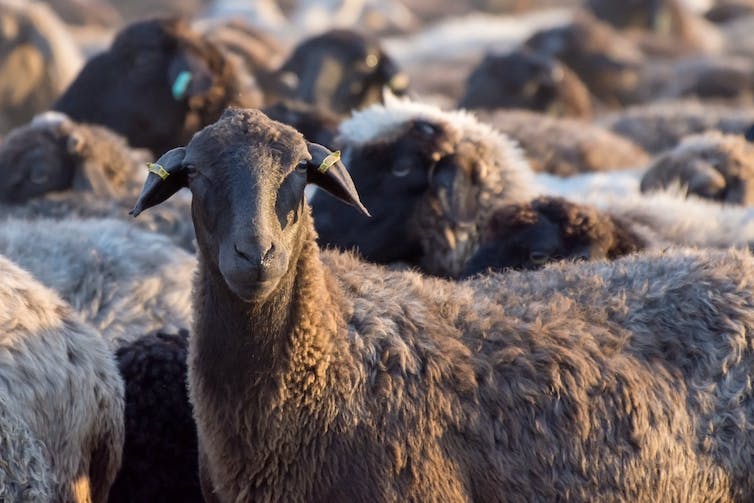 Read more: Friday essay: mom jeans and nostalgia in a time of uncertainty

Many more foreigners visited from the early 1960s as Afghanistan embarked on a program of modernisation which saw significant numbers of women in the country’s cities unveil and find new forms of paid work.

In 1969 it opened, under lease to the Intercontinental Group, with rooftop dining and dancing facilities, a cocktail lounge, brasserie coffee shop, tennis courts and swimming pool. Most western visitors were hippies who, as English poet J. C. E. Bowen put it, travelled overland “in every imaginable kind of clapped-out motor vehicle […] through the bottleneck of Kabul on their way towards the imagined Elysium of Kathmandu”.

Their prime destination was Chicken Street in the Shahr-e Naw, a garden suburb close to the city centre, which was the most westernised part of Kabul. Once a domain of poultry vendors, Chicken Street became a tourist strip lined with antique shops, clothing, embroidery and jewellery stores, and carpet dealers. In Across Asia on the Cheap, the first Lonely Planet guide, published in 1973, Tony Wheeler described Chicken Street as “the freak centre of Kabul”. 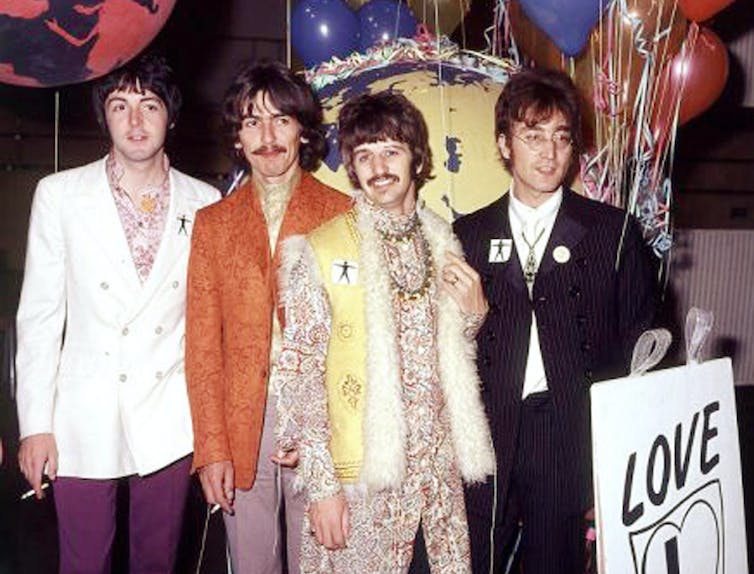 Hippie capitalism became commonplace. As some travelled, they looked for local products to sell back home in the West and, if they made a good profit, imported more.

Richard Neville, the Australian of Oz Magazine fame, who bought a pustincha for himself while travelling overland from Sydney to London in 1965, encouraged this commerce.

In Play Power, his 1970 manifesto and manual for hippies, Neville recognised the larger exchange of dress occurring in Afghanistan and other countries on the Hippie Trail. He advised:

Sell your western-styled jeans in Nepal, and your long leather boots in Morocco. Once you could make 500% profit bringing back sheepskin jackets from Kabul, and you can triple your money with antique robes. 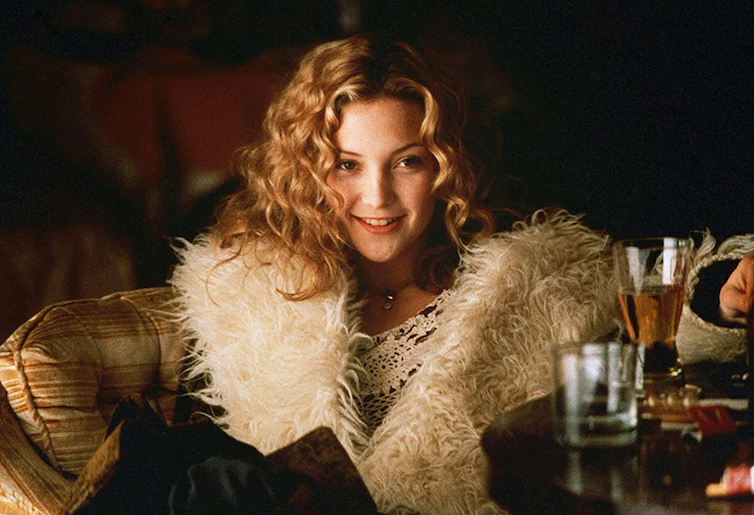 To recreate the aesthetic of the early 1970s for Almost Famous, costumers put the central character of Penny Lane in an Afghan coat. IMDB

Read more: With energy, ideas and cheek to spare, Richard Neville was the boy of OZ

Craig Sams, a young American who also travelled through Kabul in 1965 before settling in London, became a supplier.

His prime outlet was Granny Takes a Trip — London’s weirdest, most extreme, most exotic, hippest boutique — on the King’s Road in Chelsea, which soon eclipsed Carnaby Street as London’s fashion centre. At first, Granny Takes a Trip sold Victorian clothes, often modified to create a slightly modern feel. By 1967, when it began stocking pustinchas, its range included Charleston dresses of the 1920s, Victorian bustles from the 1880s, Boer War helmets, African fezes, Arab headdresses and Chicago gangster suits from the prohibition era.

Granny Takes a Trip was the London mecca of hippy chic.

The pustinchas were bought by men and women as Granny Takes a Trip was one of the first boutiques not to differentiate male from female dress. But it was men, particularly rock and pop stars, who brought Afghan jackets and coats to public attention.

Jimi Hendrix wore his orange-red, brocaded, sleeveless pustincha over an iridescent purple shirt with huge flared sleeves in one of the first all-star rock events in England, at the Kensington Olympia in London. Syd Barrett of Pink Floyd and Pete Townshend of The Who also wore them on stage. Eric Burdon, of House of the Rising Sun fame, got married in his.

All four Beatles wore pustinchas inside-out in their film of the Magical Mystery Tour and on the album’s cover. When the Beatles tried their hand at retail, their Apple Boutique had shelves of them. From across the Atlantic, it appeared to Life in 1968 that pustinchas had been “launched last season in England by the Beatles and their followers”.

The Kinks wore sheepskin Afghan coats in their Apeman video circa 1970.

Read more: Friday essay: why traditional Persian music should be known to the world

Abracadabra, Manhattan’s first psychedelic boutique, soon followed. Its interior was lit by fluorescent tubes set on a flicker-flash sequence, which had particular impact since Abracadabra was filled with mirrors like a penny arcade. Its shop window featured a motorised hanger that made the clothes on it “rock ’n’ roll”.

When one hippie traveller returned from Afghanistan with five pustinchas at the start of 1968, Ira Seret of Abracadabra put them in its window where they were spotted by designer Anne Klein, who had just made leather fashionable for the New York outfitter Mallory’s. When Klein asked Seret to secure more and his original provider failed to deliver, Seret went to Afghanistan himself.

That summer and autumn, pustinchas were in Bloomingdale’s and Macy’s and all the glossies. Vogue reported that Afghan “coats and weskits beautifully embroidered in silk floss colours” were being “shovelled out the door” by Limbo, a boutique in New York’s East Village. Life magazine featured pustinchas sent by Ira Seret to Mallory’s, worn by five female models “over bright silk jump suits and slung about with yards of Mideast jewellery”. Harper’s Bazaar devoted two pages to Mallory’s embroidered and braided vests, again presented as womenswear.

The coats were cheap compared to most fashionable western clothes, even after Afghan makers more than doubled their prices in response to international demand. The one complaint was that they smelled foul when wet, due to a skin curing process more akin to pickling than tanning. This lead to Kabul’s first drycleaners to offer “exclusive no-smell treatments”.

By 1969, many more pustinchas were being worn outside Afghanistan than within it, as they maintained their appeal with the most beautiful people and became part of youth’s uniform. 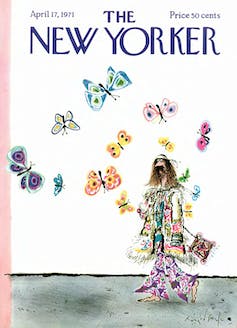 The enduring audience for the pustincha was, however, downmarket — their iconic status confirmed in 1971 by artist Ronald Searle in a cover drawing for the New Yorker of a long-haired, bearded, barefoot hippie with flared trousers, shoulderbag, headband and pustincha.

Their international embrace fuelled new enthusiasm for Afghan clothing among some of Kabul’s elite who accepted that women should unveil but wanted Afghans to fight against foreign influences and keep Afghan customs alive.

In 1968, the biggest sweatshop employed 30 workers. In 1970, when demand surged not only in the United States and Europe but also, for the first time, in Japan, one company employed 160 embroiderers who completed 30 to 40 coats each day. Another company built a hostel for its 250–300 embroiderers, primarily widows and young women from the provinces where there were many skilled needleworkers. 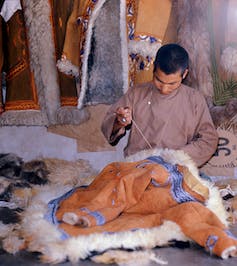 As these coats spread round the world, they fuelled awareness of Afghanistan, even if not quite as much as one Kabuli dealer boasted to the New York Times “Before no one remembered Afghanistan,” he said. “Now everybody remembers.”

This essay is an extract from Two Afternoons in the Kabul Stadium: A History of Afghanistan Through Clothes, Carpets and the Camera, to be published August 3 by Text Publishing.