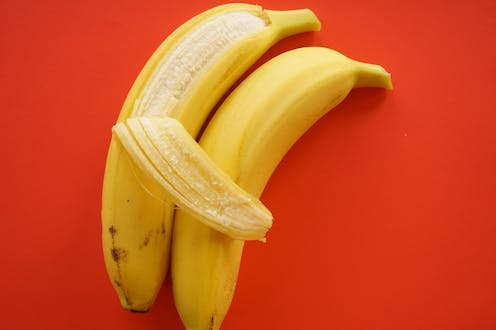 Doctors are reportedly concerned about a spike in the number of kids with gastroenteritis – when tummy infections can cause nausea, vomiting, diarrhoea, fever, abdominal pain, headache and muscle aches.

Rotavirus is a common cause of gastroenteritis in children and the reported rotavirus rate in New South Wales so far this year is five times what it usually is.

While there’s a lot of gastroenteritis occurring, the good news is the vast majority of cases kids will have an uneventful recovery.

Still, parents and carers get a lot of conflicting advice about the food and drinks kids should consume during recovery from the illness. Let’s look at the evidence.

Read more: Gastro outbreak: how does it spread, and how can we stop it? A gastroenterologist explains

Applesauce is a distinctly American food product and indeed the first mention of this diet was in an American report in 1926 on the treatment of “intestinal intoxication” in children.

The BRAT diet was historically recommended but has fallen out of favour over the past couple of decades. There are no clinical trials on the diet itself but evidence to support it came from studies that demonstrated how each food in the BRAT diet could help with gastro recovery.

Bananas and apples are rich in a starch called pectin that can form a gel, which helps to treat diarrhoea. Green banana pulp and flour in particular was found to reduce diarrhoea in children. Bananas are also a rich source of potassium, which can help to replace potassium lost with diarrhoea.

Rice-based oral rehydration solutions (a drink made from a mixture of water, rice, glucose, sodium, and potassium salts) used to treat gastroenteritis reduce the volume of stools and duration of diarrhoea in patients. A study from Bangladesh on infants with persistent diarrhoea found a rice-based diet containing green banana or pectin improved stool consistency and reduced the duration more than a diet of rice alone.

Read more: Explainer: what is gastroenteritis and why can't I get rid of it?

The use of apples to treat diarrhoea is thought to have started in Germany, where a nurse called Sister Frieda Klimsch used the fruit to treat dysentery (a severe form of gastroenteritis) in a hospital.

Another origin story tells of how a doctor in a German prison camp noticed prisoners with dysentery who ate apples from a nearby orchard had shorter and milder illness. The doctor started encouraging them to eat apples to treat diarrhoea.

Eating apple peel was observed to lead to vomiting in infants in the 1930s and so the peel was removed. Grated apple was used to treat diarrhoea in children around the same period and was helpful in some cases.

Later, applesauce became the recommended form of apple for gastroenteritis recovery in the United States, and features in the BRAT diet. Interestingly, giving diluted apple juice to children with mild dehydration from gastroenteritis is both safe and effective.

Applesauce is a distinctly American product, but grated apple works too. Unsplash, CC BY

Why gastro diet advice has changed

Over the past 20 years or so most health professionals have come to the conclusion the restricted BRAT diet is unhealthy in gastroenteritis recovery because it is low in protein, fat, and energy. All these nutrients are necessary for healing.

Studies have shown, in general, normal eating does not worsen the course of gastroenteritis. So it’s not necessary to restrict your child’s diet. Fasting when recovering from gastroenteritis is not recommended but it’s important to consider the child and ease into the reintroduction of foods.

It turns out fat, lactose and sucrose absorption during diarrhoea is limited – so it’s sensible to avoid fatty foods and foods high in simple sugars (including juices and soft drinks) for moderate to severe diarrhoea as these could worsen symptoms.

Read more: Diarrhoea, stomach ache and nausea: the many ways COVID-19 can affect your gut

Flat soft drinks such as colas and lemonade warrant a special mention. Some view these drinks as an option to replenish fluids and glucose lost by vomiting and diarrhoea. But research has shown that this may not be a good idea.

One British study searched the medical literature going back to the 1950s for evidence to support the use of soft drinks in gastroenteritis. They found none.

Then the researchers compared the contents of colas and other sodas with commercially available oral-rehydration solutions containing electrolytes and small amounts of sugar. They found the soft drinks not only contained very low amounts of potassium, sodium and other electrolytes, but in some cases as much as seven times the glucose recommended by the World Health Organization for rehydration.

Carbonated drinks, flat or otherwise, are therefore not considered to provide adequate fluid or electrolytes and are not recommended.

So what should you eat and drink during gastroenteritis recovery?

Parents of young children with mild gastroenteritis should keep them hydrated by encouraging fluid intake through water and milk, and discourage fruit juices and carbonated drinks.

A systematic review and meta-analysis of 174 studies concluded the use of a probiotic (Saccharomyces boulardii) and zinc supplementation can help during recovery from gastroenteritis, reducing the duration of diarrhoea as well as stool volume.

If symptoms or dehydration are severe then you should take your child to see a GP or go to the closest hospital emergency department.