To perform an exit is not as simple as it sounds. In fact, exiting a situation can be almost impossible for some.

Exit Strategies is a new production by indie performer and theatre maker Mish Grigor in collaboration with Aphids co-director Lara Thoms and Eugenia Lim. It delves into the difficulty of exiting, by tracing the often banal yet agonising pathways – physical, emotional, or practical – one takes to leave.

The production raises the idea exits are also profoundly philosophical. What does it mean to exit? Is an exit the same as an arrival?

Grigor references the political dimension of the exit, having developed the script while attending an artist’s residency in the UK against a backdrop of relentless media coverage on the polarising debates around Brexit.

Conversely, exits are spaces of possibility. They are dark matter – a threshold inviting us to leap into the unknown. They are profoundly theatrical. A play is replete with exits. If it wasn’t, how would actors leave the theatre and return home?

In life, exits can be absurd, be opportunities for self reflection, or self-sabotage. They can be thrilling, funny, humiliating, and of course fatal. 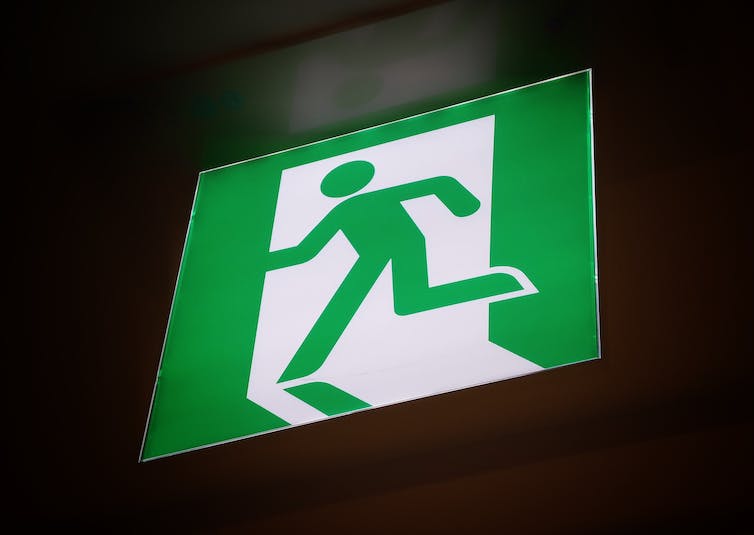 The production uses green screen and projection - badly, but intentionally so. Unsplash, CC BY

Grigor exhausts all these variations in a 75-minute performance delivered as monologue. The production is deceptively simple. It is often understated in its delivery, yet incredibly rich in the way it casually weaves biographical narrative into larger concerns such as around colonialism and settler anxiety.

Despite these ruminations, the production is not obviously didactic or preachy. Its delivery plays at being casual while resolutely goading us with humour. Grigor drops familiar and cheesy references to 90s Australian television, politicians, cultural events, and – in more sobering moments – xenophobic and racist political developments.

Part of the pleasure in witnessing her repeated exit failures is that her performance is deliciously anti-heroic: this is no Iliad and Grigor is no Odysseus or Homer. Yet there is a wry allusion to long form poetry, which in performance translates as Grigor firing off instructions to the audience. She implores us to leave, to explore, invade, and conquer! It’s a sort of masculinist manifesto that goes wilfully off script.

We are told to imagine we are a child at Brisbane’s Expo 88. We are to take photos. Grigor instructs us to “print yourself out” and then “cut yourself out, just like you were there at Stonehendge”. She lists other famous sites, monuments, and curiosities we are to visit and by implication conquer, as though we are her.

The monologue feels autobiographical, confessional, all the while delivered in the imperative: “be a woman surviving late capitalism”.

The performance is peppered with visual gags executed in a floppy - almost deadpan – manner, which is stylistically antithetical to the heroic. Therein lies the humour of Exit Strategies as well as its feminist thesis: women artists (and feminist artists of every gender, race and class) have had no role to play in the sweeping narratives of dominant history. Moreover, this is not necessarily desirable. After all, who wants to feel at home among imperialists and those with a pathological need to dominate the earth and others?

In Exit Strategies there is no epic journey. Unlike the heroes of Greek tragedy Grigor can not unmoor herself from the parochial, the personal, the autobiographical, the inconsequential. We soon realise there is no clear redemptive arc (or exit) for this Australian artist. Nor is there a redemptive arc for us in the audience – especially those of us who are white settlers. 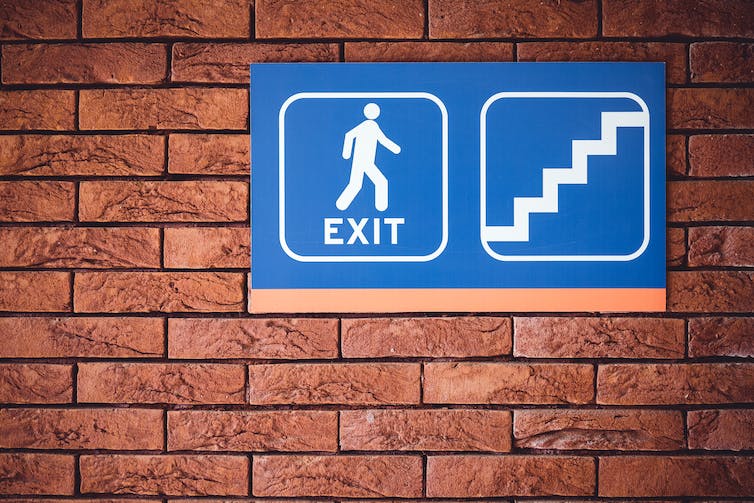 Grigor explores every type of exit. Unsplash, CC BY

There is a quality of pastiche at play here, threaded into the production’s form as well as its content and aesthetic. We jump from image to image, place to place, from childhood experiences, to historical events, to personal anecdotes about nightmarish benders on cocaine, wine, ice, only to cycle back again.

Green screen is used – badly but deliberately – so Grigor can interact in real time with herself. An even larger scrim curtain is unfurled and she appears as enormous and superimposed upon images of the Colosseum, the Taj Mahal, Statue of Liberty, Phillip Island’s Big Koala, Queensland’s Big Banana. You get the joke: upsize or exit the building!

If making it as an artist in Australia means becoming a cutout virtual version of yourself, easily transposed into the phallocentric narratives of historical progress – however awkward and naive the effect – then perhaps it’s not worth it.

Grigor shows us how she is failing at exiting the personal to enter history, the place where heroes and artistic geniuses are made. But the failure is ultimately welcomed, it is messy, ambivalent, yet somehow fabulous and productive.