One is the fallout from the coronavirus, where the picture has been altering on a near-daily basis. The other is very different - the now rapidly changing politics of the very long-running climate debate.

In such circumstances, “messaging” becomes critical, and Scott Morrison, a meister of that art, is hard at work.

As COVID-19 spread in Europe and elsewhere this week, the federal government on Thursday jumped ahead of the World Health Organisation, and activated its emergency plan in anticipation of a pandemic.

Announcing the move, Morrison declared: “The key message that I really want to get across to Australians today is: because of the actions we’ve taken on the coronavirus we’ve got ahead. We intend to stay ahead. And together we will get through this”.

This feeds into the government’s wider narrative of “keeping Australians safe”, and having “plans”.

The virus’s local health impacts are at this stage only potential, but the economic ones are already being felt. The unknown is how high the ultimate cost to the economy will be. Treasury is looking at some relief measures, although Morrison underscores they would be “modest” and “targeted”.

Morrison’s news conference earlier in the week, featuring Treasurer Josh Frydenberg as well as Health Minister Greg Hunt, had a purpose beyond reassuring the public the government was covering all bases on the virus.

It set up a narrative to say, if this means the economy falls in a hole and the budget’s “back in black” storyline morphs into a fairytale, it’s not our fault.

That might be true. As the government prepared its pre-election budget, no one could have anticipated the virus (or the extent of likely bushfires). But if you boast too loudly, if the Liberal party markets “back in black” mugs, there’s further to fall if you can’t deliver.

Nevertheless, just as the government should have been restrained with its self-applause, so critics should be wary now. Morrison and Frydenberg are trying to take out insurance against a deficit, but they’ll be pursuing every hollow log and accounting trick to avoid that. Those “back in black” mugs will become a collector’s item if the budget’s in the red, but they might end up just another bit of kitsch.

The challenge Morrison faces in his messaging on climate is more complex. Last election, while climate was an issue, Labor’s policy was vulnerable.

The present picture is different. The fires have elevated the climate debate. And where Labor’s policy previously could be painted as isolated or extreme, now the Coalition looks the odd one out.

This is clear on the 2050 target of zero net emissions, to which Anthony Albanese has committed (while putting off a decision on the medium term target). With all states and territories, the Business Council of Australia, and Britain’s Conservative PM Boris Johnson signing up to mid-century carbon neutrality, it’s hard to run the argument it’s some kooky idea. 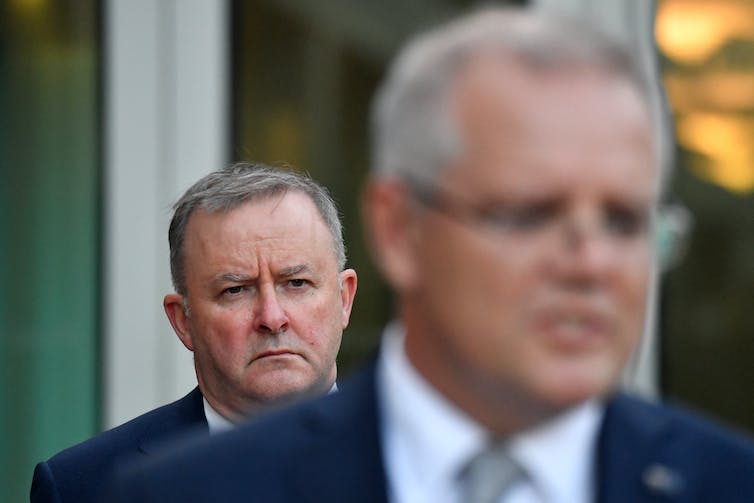 Mick Tsikas/AAP Of course this didn’t stop the Coalition piling onto Albanese. But for all the bluster, Morrison knows the usual crude attacks are unlikely to suit him beyond the short term. There is a lot of government manoeuvring going on to readjust its climate rhetoric, as well as keep options open. Talking about the bushfires, Morrison now routinely acknowledges the impact of the changing climate – without accepting a cause-and-effect argument. This is different from some of those in the Coalition who claim these fires were like all the others in our history. On energy, while stressing the need for dispatchable power, Energy minister Angus Taylor is talking up, with greater enthusiasm than previously, Australia’s progress on renewables. In relation to the controversial question of using carry over credits to get to Australia’s 2030 Paris target, the government is privately becoming confident they won’t be needed. In relation to net zero, those around Morrison point out he’s not dissing the target itself, but the absence of a “plan” to get there. He told the Coalition party room this week: “I won’t commit to anything I don’t know the cost of, if I don’t know the impact on jobs. It’s not about being for or against a target.” On one school of thought, Morrison could be keeping open the possibility of supporting the 2050 target if that later looks the best political course. He will be under strong pressure to do so in the run up to the Glasgow climate conference late in the year. Indeed, just the weight of business and public opinion will be formidable. An Essential poll published this week showed 75% of Australians supported “a zero-carbon pollution target for 2050 if it were adopted by the federal government”. Read more: Albanese pledges Labor government would have 2050 carbon-neutral target Morrison may be ensuring his messaging leaves him wriggle room, but there would be an obvious massive problem if he did decide he’d be better off to endorse the target. He might be the ultimate pragmatist but it’s another matter with the Nationals. Michael McCormack’s precarious leadership means the hardliners in the Nationals (Matt Canavan, Barnaby Joyce) can drive that party’s position. McCormack can’t afford to deviate. He said bluntly this month, “Net zero emissions by 2050 equals net zero jobs growth by 2050”. If Morrison tried to sign up to the 2050 target he would risk triggering an explosion in the Nationals. On the other hand, if McCormack were replaced by his deputy David Littleproud, such a policy move might be possible. In partisan terms, the downside for Morrison of adopting the 2050 target would be to knock out a line of attack on Albanese. But that attack threatens to become a lot less effective once we get past the knee-jerk reaction we’ve seen this week. It can’t be predicted where Morrison might end up on the 2050 target. Perhaps he doesn’t know himself. Possibly he could nuance the message – recast it as a “goal”, for instance. In the shorter term, watch out for the messaging when the government turns its attention to electric cars. It will be a lot more positive than in the election campaign, when Labor’s commitment to them was, apparently, a threat to the Aussie weekend. Different circumstances, different message.