In 2014, Joanna Rakoff published a memoir, My Salinger Year, recounting the events of the year she spent working as a “Girl Friday” in Harold Ober Associates – one of New York’s oldest and finest literary agencies.

Rakoff’s sole responsibility was to read the constant stream of fan mail sent to its most famous client, JD Salinger, and to write polite “brush off” letters to their authors.

Rakoff enjoyed at least one encounter with Salinger. The Joanna of Philippe Falardeau’s film adaptation only gets to hear Salinger’s voice courtesy of the phone calls. Nonetheless, these gradually work their magic on Joanna and she comes to appreciate the adoration he inspires in his fans.

As Rakoff remarked in a 2014 interview: “I became a true believer. It was a bit like being inculcated into a cult!”

At first, she scoffed at the god-like awe in which Salinger’s fans and the agency held him, but after reading his books she thought: “I get it, he really is a genius”.

Romantic notions of the literary world

Born in 1919, Salinger is best known for his only novel, The Catcher in the Rye, published in 1951. He followed this novel with several short stories and novellas, including the collection Nine Stories (1953) and Franny and Zooey (1961).

The last work published in his lifetime was Hapworth 16, 1924, published in The New Yorker in 1965. While The Catcher in the Rye remained an erstwhile best seller, Salinger became notoriously reclusive until his death in 2010 at the age of 91.

Both novel and movie are set in midtown Manhattan in 1996. Computers were only just beginning to appear in American offices. From the art deco design of the agency’s offices (the real Harold Ober Associates was in Madison Avenue) to the small, narrow bookshops with their shelves crammed full of hardbacks, the movie excels at the atmosphere of shabby chic glamour that permeated New York’s literary scene at the time.

The young Joanna, wide-eyed and earnest, is perfectly played by Margaret Qualley (daughter of Hollywood actress Andie MacDowell). Sigourney Weaver as Joanna’s boss and Salinger’s agent, Margaret, is brilliant at playing the neurotic, ageing career woman, at once intimidating and vulnerable.

Director Philippe Falardeau plays up the initial tension between Joanna and her boss: Margaret’s dismissal of new-fangled technology — especially computers — means the agency is caught in a time warp, and Joanna’s letters must be typed on an old typewriter.

Margaret also tries to disabuse her young assistant of any romantic dreams she might have about her job. Being a literary agent, she says it is all about sales and commerce. But Joanna has other ideas. She defies Margaret’s orders and writes personalised replies to Salinger’s fans. 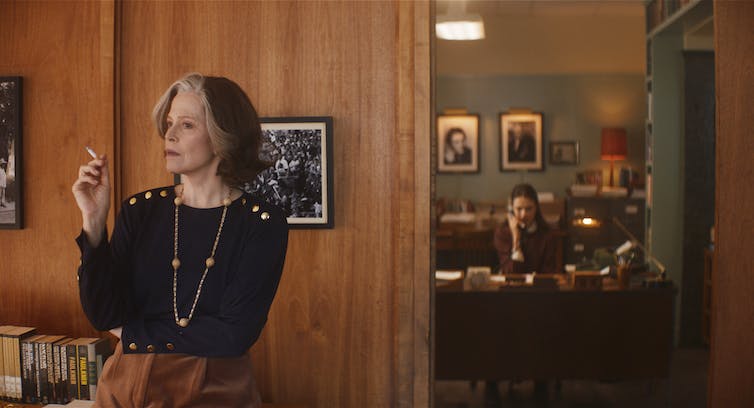 Margaret’s cynicism is met with wide-eyed optimism by her assistant, Joanna. Palace Films

The fans, she believes, deserve the same thoughtful and passionate response that Salinger’s novels elicit from his readers, a passion which is apparent from their letters. Falardeau presents these letters through a series of imagined conversations between the fans and Joanna.

By focusing on the theme of Salinger on the one hand, and the way the year in New York helped Rakoff decide the direction of her life and career on the other, Farlardeau’s movie drastically condenses Rakoff’s narrative while still remaining true to the text.

It is partly because of Salinger’s constant encouragement in their phone calls and her own self belief that Joanna doesn’t lose her dream of becoming a writer. Margaret might be a cynic, but optimism wins out. 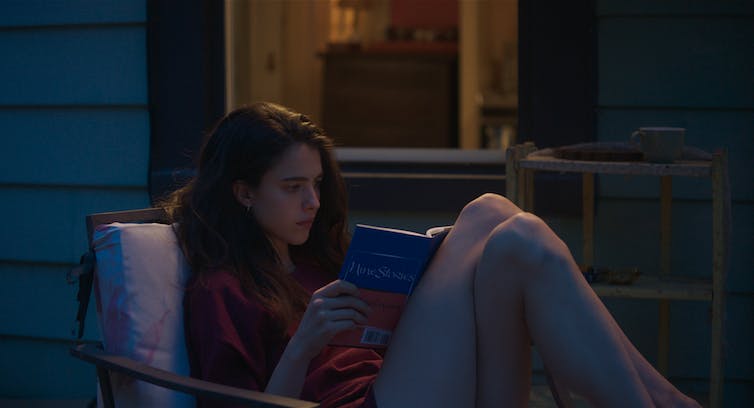 In learning to love Salinger, Joanna forges her own path as a writer. Palace Films

While the film lacks the sparkling wit of Rakoff’s book, it makes up for in its faithful recreation of 1990s New York and the sensitive way it portrays a young woman’s youthful dreams of becoming a writer — and the first exploratory steps she took in order to get there.

My Salinger Year will warm the hearts of J.D. Salinger fans, and will keep the dream alive for many aspiring creative writers.

My Salinger Year is in cinemas now.

Correction: this piece has been updated to note Margaret Qualley’s mother is Andie MacDowell, not Demi Moore.

Engineers have built machines to scrub CO₂ from the air. But will it halt climate change?

ClimeworksOn Wednesday this week, the concentration of carbon dioxide in the atmosphere was measured at at 415 parts per million (ppm). The level is the highest in human history, and...

To publish or not to publish? The media's free-speech dilemmas in a world of division, violence and extremism

AAP/AP/ John Nacion/STAR MAX/IPxTerrorism, political extremism, Donald Trump, social media and the phenomenon of “cancel culture” are confronting journalists with a range of agonising free-speech dilemmas to which there are...

I've heard COVID is leading to medicine shortages. What can I do if my medicine is out of stock?

from www.shutterstock.comYou’ve just come from your monthly GP appointment with a new script for your ongoing medical condition. But your local pharmacy is out of stock of your usual medicine...

Silas Baisch/UnsplashLast week, the McIver’s Ladies Baths in Sydney came under fire for their (since removed) policy stating “only transgender women who’ve undergone a gender reassignment surgery are allowed entry”...

Despite many young Australians having a deep interest in political issues, most teenagers have a limited understanding about their nation’s democratic system. Results from the 2019 National Assessment Program –...

Expect the new normal for NZ's temperature to get warmer

Flickr/Stephen Murphy, CC BY-NC-NDIt might be summer in New Zealand but we’re in for some wild weather this week with forecasts of heavy wind and rain, and a plunge in...

Curious Kids: how do scabs form?

ShutterstockHow do scabs form? — Talila, aged 8Great question, Talila! Our skin has many different jobs. One is to act as a barrier, protecting us from harmful things in the...

Men and women kill their children in roughly equal numbers, and we need to understand why

On average, one child is killed by a parent almost every fortnight in Australia.Last week, three children — Claire, 7, Anna, 5, and Matthew, 3 — were included in this...

www.shutterstock.comWe will not be able to put the COVID-19 pandemic behind us until the world’s population is mostly immune through vaccination or previous exposure to the disease. A truly global...

After riots, Donald Trump leaves office with under 40% approval

AAP/EPA/ Yuri Gripas /poolAt 4am Thursday AEDT, Joe Biden and Kamala Harris will be inaugurated as president and vice president of the United States, replacing Donald Trump and Mike Pence...

when we frame illegal fishers as human and drug smugglers, everyone loses

Illegal, unreported and unregulated fishing costs economies up to US$50 billion globally each year, and makes up to one-fifth of the global catch. It’s a huge problem not only for...