The dating of an exceptionally old cave painting of animals that was found recently on the Indonesian island of Sulawesi is reported in our paper out today.

The painting portrays images of the Sulawesi warty pig (Sus celebensis), which is a small (40-85kg) short-legged wild boar endemic to the island.

Dating to at least 45,500 years ago, this cave painting may be the oldest depiction of the animal world, and possibly the earliest figurative art (an image that resembles the thing it is intended to represent), yet uncovered.

Sulawesi is host to abundant cave art, the existence of which was first reported in the 1950s.

Until recently, the prevailing view was this art was the handiwork of Neolithic farmers who arrived around 4,000 years ago from southern China rather than the hunter-gatherers who had lived on Sulawesi for tens of thousands of years.

We now know that this is not correct.

In 2014, we reported the first dates for the South Sulawesi rock art.

Based on uranium-series analysis of mineral deposits (calcite) that formed naturally on the art we showed that a stencilled image of a human hand found in one cave was created at least 40,000 years ago. This is compatible in age with the famous ice age cave art in Europe.

Ice age art in the tropics.

Then, in 2019, we dated a spectacular painting at another cave that portrays hybrid human-animal figures hunting Sulawesi warty pigs and dwarf buffalos (anoas). This hunting scene is at least 43,900 years old and it features what may be the oldest depictions of supernatural beings.

In our latest study we push the age of Sulawesi’s rock art a little deeper into the past.

In December 2017 we conducted the first survey of an isolated valley set in mountainous terrain a stone’s throw from one of Indonesia’s largest cities, Makassar.

Despite its proximity to a major urban centre, there is no road to this valley. The small community of local Bugis farmers live a secluded existence, although they are widely reputed for the sublime quality (and potency) of their palm wine (ballo).

According to them no Westerner had ever set foot in their valley before.

This secret valley is a pristine environment and a place of resplendent natural beauty. There is hardly any rubbish in the tiny village in the centre of the valley. Being there feels like stepping back in time.

The valley harbours a limestone cave known as Leang Tedongnge and inside it we found a rock painting the locals claimed they had never noticed before. 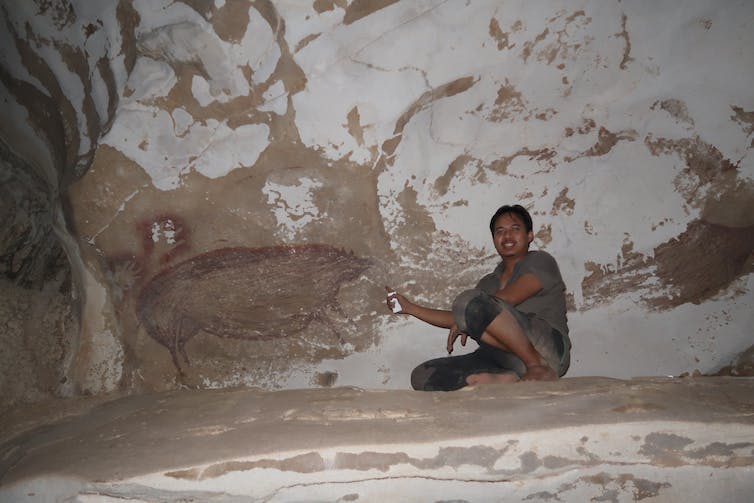 The painting was produced using a red mineral pigment (ironstone haematite, or ochre). It depicts at least three Sulawesi warty pigs engaged in social interaction of some kind.

We interpret the surviving elements of this artwork as a single narrative composition or scene, a mainstay of how we tell stories using images today but an uncommon feature of early cave art. 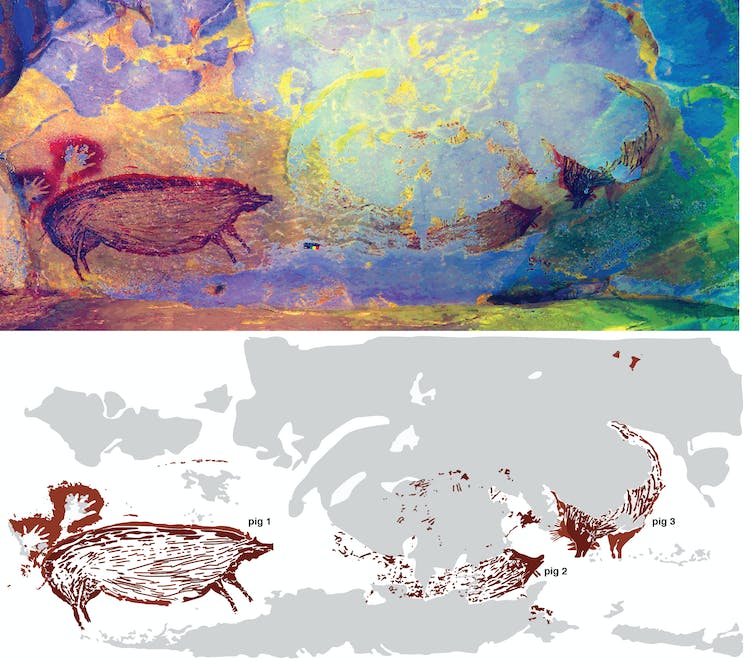 The top image has been enhanced (in DStretch) to make the artwork clearer. The bottom image shows a tracing of the art. Adhi Agus Oktaviana, Author provided

Unlocking the age of the art

Dating rock art is very difficult at the best of times. But at Leang Tedongnge we were fortunate to identify a small calcite deposit (known as “cave popcorn”) that had formed on top of one of the pig figures (pig 1).

We sampled the calcite and analysed it for uranium-series dating. Amazingly, the dating work returned an age of 45,500 years ago for the calcite, meaning the painting on which it formed must be at least this old. 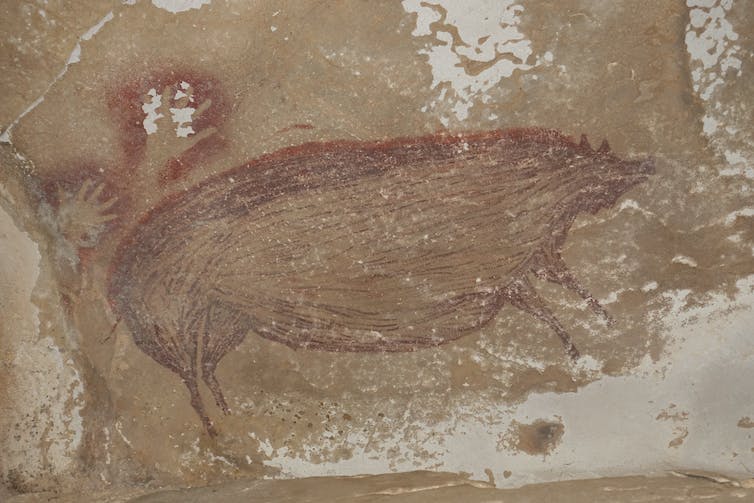 A close up of the dated warty pig painting at Leang Tedongnge. Maxime Aubert, Author provided

Our discovery underlines the global importance of Sulawesi, and the wider Indonesian region, for our understanding of where and when the first cave art traditions developed by our species arose.

The great antiquity of this artwork also offers hints at the potential for other significant findings in this part of the world.

Sulawesi is the largest island in Wallacea, the zone of oceanic islands located between mainland Asia and the ice age continental landmass of Australia-New Guinea.

Modern humans are said to have crossed through Wallacea by watercraft at least 65,000 years ago in order to reach Australia by that time.

But the Wallacean islands are poorly explored and presently the earliest excavated archaeological evidence from this region is much younger.

We believe further research will uncover much older rock art in Sulawesi or on other Wallacean islands, dating back at least 65,000 years and possibly earlier.

Engineers have built machines to scrub CO₂ from the air. But will it halt climate change?

ClimeworksOn Wednesday this week, the concentration of carbon dioxide in the atmosphere was measured at at 415 parts per million (ppm). The level is the highest in human history, and...

To publish or not to publish? The media's free-speech dilemmas in a world of division, violence and extremism

AAP/AP/ John Nacion/STAR MAX/IPxTerrorism, political extremism, Donald Trump, social media and the phenomenon of “cancel culture” are confronting journalists with a range of agonising free-speech dilemmas to which there are...

I've heard COVID is leading to medicine shortages. What can I do if my medicine is out of stock?

from www.shutterstock.comYou’ve just come from your monthly GP appointment with a new script for your ongoing medical condition. But your local pharmacy is out of stock of your usual medicine...

Silas Baisch/UnsplashLast week, the McIver’s Ladies Baths in Sydney came under fire for their (since removed) policy stating “only transgender women who’ve undergone a gender reassignment surgery are allowed entry”...

Despite many young Australians having a deep interest in political issues, most teenagers have a limited understanding about their nation’s democratic system. Results from the 2019 National Assessment Program –...

Expect the new normal for NZ's temperature to get warmer

Flickr/Stephen Murphy, CC BY-NC-NDIt might be summer in New Zealand but we’re in for some wild weather this week with forecasts of heavy wind and rain, and a plunge in...

Curious Kids: how do scabs form?

ShutterstockHow do scabs form? — Talila, aged 8Great question, Talila! Our skin has many different jobs. One is to act as a barrier, protecting us from harmful things in the...

Men and women kill their children in roughly equal numbers, and we need to understand why

On average, one child is killed by a parent almost every fortnight in Australia.Last week, three children — Claire, 7, Anna, 5, and Matthew, 3 — were included in this...

www.shutterstock.comWe will not be able to put the COVID-19 pandemic behind us until the world’s population is mostly immune through vaccination or previous exposure to the disease. A truly global...

After riots, Donald Trump leaves office with under 40% approval

AAP/EPA/ Yuri Gripas /poolAt 4am Thursday AEDT, Joe Biden and Kamala Harris will be inaugurated as president and vice president of the United States, replacing Donald Trump and Mike Pence...

when we frame illegal fishers as human and drug smugglers, everyone loses

Illegal, unreported and unregulated fishing costs economies up to US$50 billion globally each year, and makes up to one-fifth of the global catch. It’s a huge problem not only for...