Every four years on January 20, the US exercises a key tenant of democratic government: the peaceful transfer of power. This year, the scene looks a bit different.

If the last US presidential inauguration in 2017 debuted the phrase “alternative facts”, the 2021 inauguration represents their deadly consequences. After conspiracy-theory inspired violence laid siege to the Capitol Building where lawmakers met to confirm the election results, more than 20,000 troops now patrol the US Capitol to ensure the transition goes ahead smoothly against calls for insurrection.

The threat of disinformation and alternative facts has taken many forms over the past several years, from conspiracy theories about climate change to COVID-19, culminating in a 2019 FBI memo warning about the threat of “conspiracy-theory driven domestic extremists”, particularly around elections.

It follows years of warnings from national security practitioners and scholars about the growing risk of domestic extremists. More recently, as reported by the FBI and ASIO, these groups have used the global pandemic to recruit and radicalise new members, seizing on the isolation and uncertainty to offer a sense of community and clarity of purpose.

The conspiracy theory that drove the violence at the Capitol Building has been building for the past four years. During this time, US President Donald Trump has decried any contest he does not win as fraudulent.

More recently, he has called his supporters to action, warning that there will be “no God” and “no country” without him as president. Though the attack only lasted a few hours, the consequences will linger for years.

As Joe Biden prepares to become the 46th president of the United States, managing the fallout from it will be one of his gravest challenges.

Read more: As US election day nears, the outcome won't be simply a matter of political will

The long-standing threat of right-wing extremists

This threat appears to have been taken seriously by long-standing national security experts and scholars. But action against it was hindered under the Trump administration.

Starting in 2017, federal funding for tackling white nationalist and other far right extremist activity was cut, including university research and non-profit deradicalisation organisations such asLife After Hate

Last year, a whistleblower report from the Department of Homeland Security alleged senior intelligence officials were instructed to modify intelligence assessments to match Trump’s rhetoric and modify the section on White Supremacy in a manner that made the threat appear less severe.

During 2020, diverse groups stormed state legislative buildings to evade COVID-19 mitigation efforts and intimidate lawmakers at the behest of Trump.

Despite these public signs of growing extremist violence, even some lawmakers appeared to be caught unaware by the Capitol insurrection. In an opinion piece just after the event, Republican Senator Susan Collins wrote she first assumed the attack was coming from Iran. 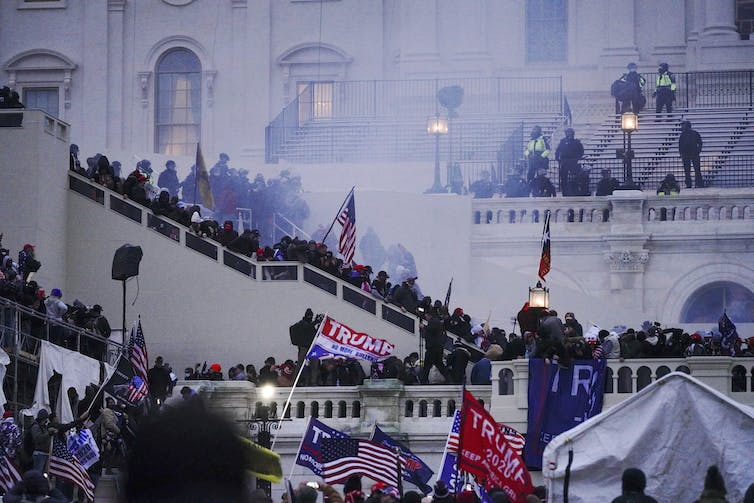 Trump has demonstrated that conspiracy theories can drive electoral and fundraising success. Having started his political campaign with the “birther” conspiracy theory, challenging the citizenship and eligibility of American-born Barack Obama, Trump also cast shadows over his Republican rivals, including Ted Cruz, by accusing Cruz’s father of being linked to the man who killed JFK.

Similarly, Trump will end his administration on a conspiracy theory, one that has already cost five lives. Despite recent backlash from business leaders in America, Trump fundraised more than $200 million after election night on the basis of his refusal to concede defeat.

Recent Congressional races have further demonstrated the success of Trump’s template. Holocaust-deniers in three states ran for office in 2018 (all as Republicans). Two of the newest members of Congress are members of QAnon, the inheritor of the “pizzagate” conspiracy theory, in which all who oppose Trump are deep state members of a international child sex trafficking cabal.

Read more: Why the alt-right believes another American Revolution is coming

The challenge ahead for Biden

Where then, does this leave policy-making on national and global issues that require sober reflection and good judgement?

Alternative facts have no place in good governance. Their purpose is only to destroy and divide. This is why disinformation has been pursued so aggressively by hostile foreign actors against the US, with Russian active measures detailed extensively by the Republican chaired Senate Intelligence Committee reports.

Voter fraud, one of the key narratives of Russian efforts in election interference in 2016, has now become mainstreamed in the Republican base, with nearly half of respondents expressing doubt about Biden’s win. Public assurances by Republican secretaries of state have had limited impact, culminating in Trump’s taped conversation in which he asks the Georgia Secretary of state to “find” 11,000 votes for him (to win).

Joe Biden should focus on repairing Americans’ frayed trust in institutions and rehabilitate America’s battered reputation. At the same time, he should lead with science and fact, most immediately in tackling the nation’s COVID crisis. 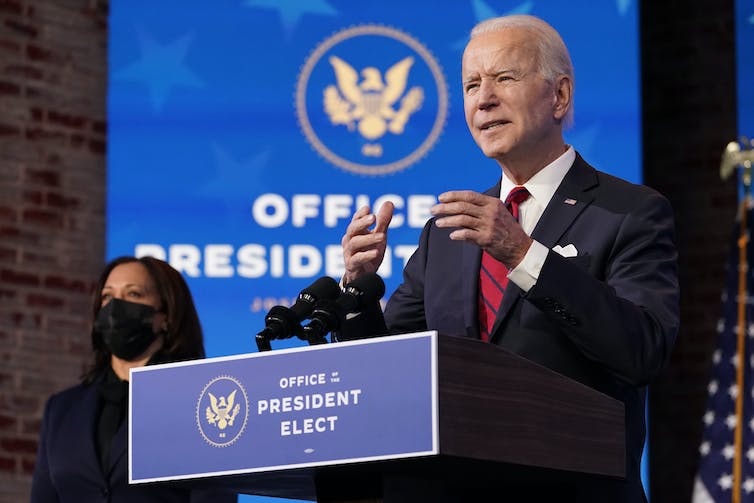 One of Joe Biden’s first priorities should be repairing trust in American institutions.

Where conspiracy theories go hand in hand with corruption (such as Trump soliciting an election official to tamper with results), state authorities should pursue charges. Where disinformation has proven lucrative, tools should be explored to remove financial rewards. For instance, non-profit organisations that participated in or fundraised what the Joint Chiefs of Staff declared as “sedition and insurrection” could be stripped of protective tax status.

Some of these remedies lie firmly with Congress. Impeachment proceedings are already underway which could remove Trump’s ability to run in 2024. The 14th Amendment could be applied to expel or bar current office holders who participated in the insurrection from running for election again.

Read more: Trump is impeached again in historic vote. Now Republicans must decide the future of their party

Trump has recently condemned the violence done in his name. But he has not disavowed the rationale for it. His supporters within the Republican base, media and elected ranks continue to repeat his conspiracy theories on Fox “entertainment” shows, on AM radio, and now the halls of Congress. More than 100 US Representatives voted against certifying the ballots on which they themselves were elected.

The next few years will see investigations, commissions and reports detailing the failures that led up to the Capitol attacks. Any delay in accountability could see even more lives lost to conspiracy theories and those who profit from them.