International flights into Melbourne are set to resume today. Arrivals will be capped at 800 people in the first week, before increasing to 1,120 from April 15.

This marks the third time a hotel quarantine system has been launched in Victoria. After a series of mishaps, is this revamped version finally up to scratch?

In June, a number of Melbourne hotel quarantine staff were infected, seeding a second wave of COVID-19 in Victoria. On July 1, Melbourne stopped receiving international arrivals. Flights would not recommence until December 7.

In planning the second version of hotel quarantine, the Victorian government had ample advice. The Victorian COVID-19 Hotel Quarantine Inquiry released an interim report on November 6 with 69 recommendations, 49 of which were accepted. The National Review of Hotel Quarantine also released its report in early November.

The second system incorporated a number of key changes, such as nominating a single government agency — COVID-19 Quarantine Victoria (CQV) — responsible for employing, training and supervising staff. The agency didn’t hire any private security guards, and staff were not permitted to have other jobs.

All staff were tested at the end of their shifts. Testing was later extended to leave days after one worker tested negative at the end of her shift but became positive, and infectious, during her days off. 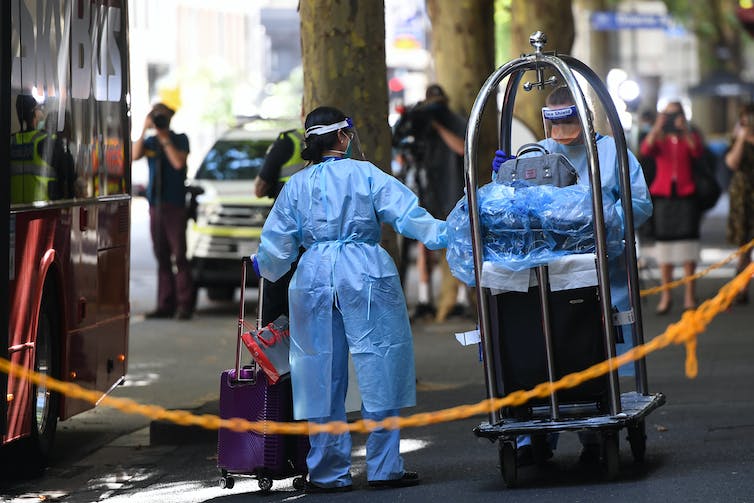 There have been several incidents in Victoria’s hotel quarantine system over the past year. Erik Anderson/AAP

Over time, the system was tweaked. For example, meal delivery and laundry pick-up were staggered so no two doors opened onto one hallway at the same time. This followed an incident in the Park Royal Hotel when a family with multiple infected members was believed to have spread the virus across the hallway to a woman who opened her door at the same time.

In February, soon after this incident at the Park Royal, a cluster of cases linked to the Holiday Inn airport hotel led to a five-day lockdown in Melbourne and no more international flights — again.

While the second version of hotel quarantine in Victoria was much more effective than the first, it ultimately failed because it did not adequately protect against airborne transmission.

Hotel quarantine needs to be an impermeable barrier

Fast forward to April and Victoria has not had a community case of COVID-19 for 40 days.

However, the situation globally is very different. Cases are surging in many European countries, Canada, parts of the United States and South America. In Asia, large resurgences have taken hold in India, Pakistan and the Philippines. Closer to home, both Papua New Guinea and Timor-Leste are experiencing serious spikes.

This escalation of cases poses challenges for Australia’s health security. A growing percentage of international arrivals will be infected and many will have one of the variants of concern that can spread more rapidly and cause more severe disease than older strains.

The hotel quarantine systems in every state and territory need to be impermeable barriers between the outside world and Australian communities.

Read more: Many of our buildings are poorly ventilated, and that adds to COVID risks

So what do we know about Victoria’s revamped system?

The key changes reflect the government’s recognition that airborne transmission — spread of the virus via tiny particles, or aerosols, that can hang around in the air — has been behind most recent breaches in the quarantine system. This came about from investigation of the cases I mentioned earlier in the Park Royal and Holiday Inn airport hotels.

Importantly, hotel ventilation systems have now been modified to ensure that when guests open their doors, the air flows from the corridor into the room, as opposed to air from the room flowing out. This followed expert room-by-room assessments by occupational hygienists and engineers. 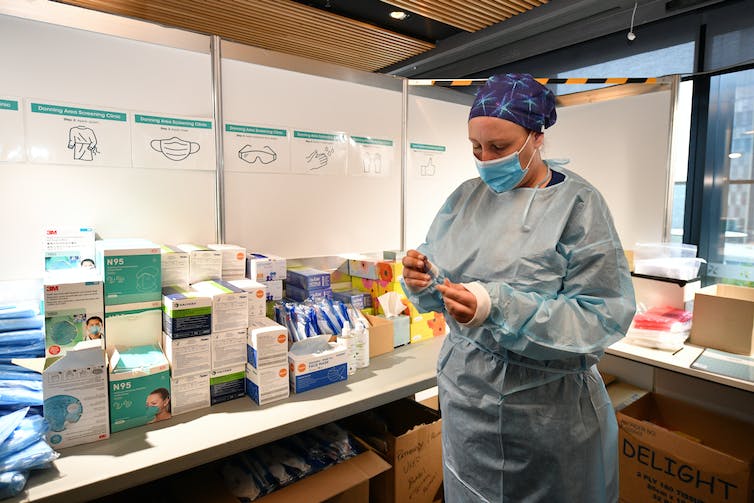 The number of tests administered to hotel guests will double from two to four. James Ross/AAP

Personal protective equipment (PPE) requirements have been standardised across all quarantine hotels to bring them in line with Health and Complex Care hotels (those that care for people who test positive to COVID-19, or “hot hotels”). More than half of the hotel staff — those who work in areas where they may be exposed to hotel guests, such as lobbies and hallways — will be supplied with N95 respiratory masks.

These two measures should effectively prevent virus transmission from infected guests to other guests and staff.

Meanwhile, testing of hotel residents will be increased from two to four times during the two weeks, with potential follow-up tests after quarantine, based on medical advice.

Further, all staff will have been vaccinated with at least one dose of the Pfizer vaccine.

While evidence for the role of airborne transmission in the spread of COVID-19 has been building since mid-2020, Australia has been slow to recognise this.

The peak advisory body in this area, the Infection Control Expert Group, still recommends surgical masks in quarantine hotels, which are less effective at preventing airborne transmission than N95 masks.

Meanwhile, the Commonwealth Department of Health website page on how coronavirus spreads (accessed on April 6, 2021) omits any mention of aerosol spread.

The restart of the Victorian system — with these new measures targeted at airborne transmission — offers a golden opportunity to inform other jurisdictions and, hopefully, to develop a national standard for hotel quarantine.

While the risk of another breach will never be zero, the revamped Victorian hotel quarantine system appears to have addressed the weaknesses of the previous system and has been informed by several rigorous reviews, including one on variants of concern.

To protect the entire country, we may need similar reforms in other jurisdictions. This should be mandated through a national hotel quarantine protocol built on consensus and sound evidence.