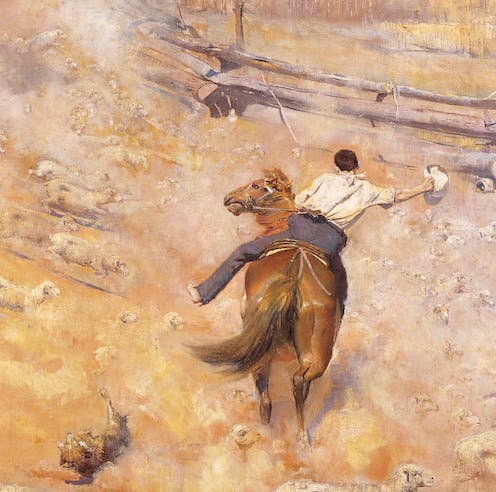 Aboriginal and Torres Strait Islander people are advised this story contains images of people who have died.

You know you are in for a wild ride when the least controversial element of a book is the suggestion “the man” in Banjo Paterson’s 1890 poem The Man from Snowy River is Indigenous.

Anthony Sharwood’s The Brumby Wars argues a compromise must be found, which recognises the sentimental attachment of many to wild horses, while acknowledging the damage they do to the environment. Much of this sentiment, he writes, comes from the enduring place of Paterson’s poem in our national consciousness. And so what if, as he suggests, the man turned out to be Indigenous?

To ask this question, Sharwood convincingly reexamines the poem in the light of Indigenous stockmen in the area at the time.

But this is just a minor question in his book. The real heat in it is between those who view the wild horses of the high country as national symbols and those who see them as destructive pests.

As Sharwood perceptively notes, Barilaro worked to broaden the appeal of the high country by citing its role in multiculturalism through the Snowy River scheme. Descendants of these immigrants, according to Barilaro, demonstrate the ability of the land to absorb “introduced species”.

If “the man” was a First Nations person, then Paterson’s poem could be reworked to “prove”, these nationalist myths have always represented “all of us” — despite the poem’s first appearance in an outlet (The Bulletin) with “Australia for the white man” as a banner.

Read more: Passing the brumby bill is a backward step for environmental protection in Australia

Those attached to the wild horses often cite their relationship to “Australian legend”, the lynchpin of which is Paterson’s poem.

Sharwood’s argument relies in part on the first lines of the poem’s final stanza:

And down by Kosciusko, where the pine-clad ridges raiseTheir torn and rugged battlements on high…

These are not the rounded hills of Thredbo, but the more precipitous pine country of the Byadbo wilderness further south. In this region, the Ngarigo and Djiringanj groups produced significant numbers of Indigenous stockmen who, in joining the nascent mountain economy, protected their people at least to some degree.

Names remembered include Jack Hoskins and Bobby Mundy, who would catch wild horses and drive them to Tathra.

Sharwood is not the first to suggest “the man” may have been Indigenous. As he notes, it dates back at least as far as an article in the Canberra Times in 1988, where the State Historian of Victoria, Bernard Barrett, suggested Paterson may have been influenced by a story written by a high-country bushman C.W. Neville-Rolfe and published in Cassell’s Picturesque Australasia in 1887.

Aboriginal people often worked as stockmen at the time of Paterson’s poem, as in this 1893 photograph. National Museum Australia

In Neville-Rolfe’s story it is Toby, a young Indigenous man, whose excellent riding and bush skills allow him to locate and capture wild horses.

A more sustained effort to find the true identity of “the man” was W.F. Refshauge’s 2013 book Searching for The Man from Snowy River. Refshauge’s most convincing candidate is Charlie McKeahnie, the subject of a very similar poem by Paterson’s friend Barcroft Boake, On the Range, published in The Bulletin in 1891.

In Boake’s poem, young Charlie Mac chases a wild horse known as “The Lord of the Hills”. Unlike Paterson’s poem, On the Range ends in tragedy. The Lord of the Hills refuses capture and servitude, instead dashing his body against a granite outcrop and dying.

Would it matter if definitive proof emerged that Paterson had a First Nations stockman in mind when he wrote the poem?

It would at least make visible the deeply buried assumption the man was white – so deeply buried, interpretations of the poem never mention it.

It would be interesting to consider how the 1982 movie would have been received if Tommy Lewis or David Gulpilil, rather than Tom Burlinson, had the lead role.

But readers of the 1890s might have been less surprised: Indigenous horse skills were widely acknowledged and admired in the form of buckjumping contexts and bush shows.

In Paterson’s poem the ‘wild’ element is the horse. Christine Mendoza/Unsplash

However, the suggestion “the man” was Indigenous would also open up an odd problem in nationalist mythology. Colonial logic advances the grand project as “taming” the country, but in Paterson’s poem the “wild” element is the horse — an introduced species.

That the horse is an introduced species can be elided in the service of national mythology, but if the “tamer” is Indigenous, any semblance of a fixed colonial logic breaks down.

The Brumby Wars shows how colonial myths of freedom and adventure in the high country are never fixed.

The Brumby Wars explores the tension between those who value the environment of the high country millions of years in the making, and those who champion a myth less than 200 years old. Sharwood expresses deep sympathies with the first party, yet recognises there is no easy solution to this problem – politics aside, any method to rid the mountains of brumbies will be cruel.

The complexities of the issue are covered with enormous insight in The Brumby Wars, which is by turns anecdotal, philosophical and ecological in expression.

Paterson may well have had daring Indigenous riders in mind when he wrote The Man from Snowy River. If proof emerged this was the case, would it help Australia towards new myths of nation or would this fact be ingested smoothly by adaptable older myths?