Western Australia is on the brink of becoming the second state in Australia to legalise voluntary assisted dying, with its upper house last night passing the Voluntary Assisted Dying Bill 2019 (WA).

A total of 55 amendments to the initial version of the bill were passed. The bill will return to the lower house next week to review the amendments.

If these amendments are ratified as expected, WA will follow the historic introduction of voluntary assisted dying in Victoria, where the option has been available since June 2019.

Remind me again, how did we get here?

The proposed legislation was developed after recommendations from a parliamentary inquiry into end of life choices, and subsequent ministerial expert panel on voluntary assisted dying.

After lengthy debate, the bill passed the lower house in September (45 votes to 11).

Read more: The fear that dare not speak its name: how language plays a role in the assisted dying debate

What does the proposed legislation permit?

The initial version of the bill featured 102 “safeguards”, including the regulation of access, the request and assessment process, administration and management of the voluntary assisted dying substance, mandatory reporting, protections for health practitioners, and oversight mechanisms.

As outlined in the proposed legislation, to access voluntary assisted dying in WA a person would need to:

The person would also need to be diagnosed with a disease, illness, or medical condition that is:

A person would not be eligible to access voluntary assisted dying only because they have a disability or are diagnosed with a mental illness.

Read more: In places where it's legal, how many people are ending their lives using euthanasia?

Protections for health practitioners include provisions for “conscientious objection”. They would have the right to refuse to participate in the request and assessment process, and to participate in the prescription, supply, or administration of the voluntary assisted dying substance, including being present when it is administered. 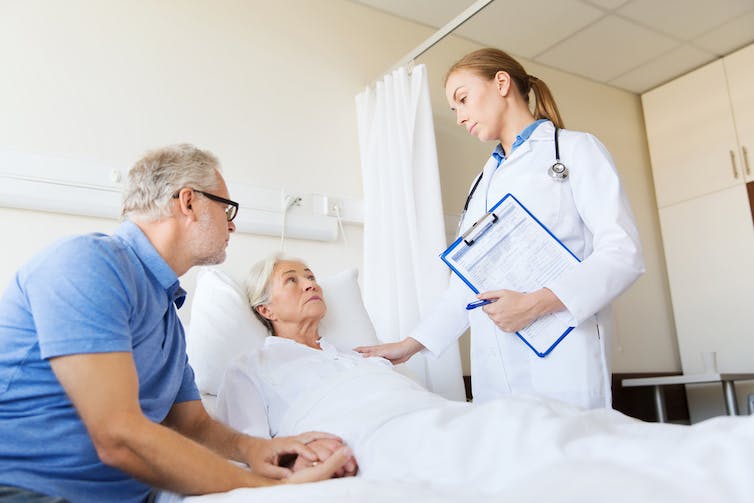 In Western Australia, eligible patients are expected to be able to request voluntary assisted dying in about 18 months. from www.shutterstock.com

Most of the amendments passed by the upper house will not substantively change the eligibility criteria or process to access voluntary assisted dying from the model initially proposed.

WA’s proposed approach is broadly similar to the Victorian regime, although there are several key differences.

Read more: WA's take on assisted dying has many similarities with the Victorian law – and some important differences

If the bill passes as expected, it will be about 18 months until the law comes into effect in WA.

Read more: Passed away, kicked the bucket, pushing up daisies – the many ways we don't talk about death

Following a similar process to Victoria, there will be an “implementation period”. This will allow time to develop resources for health services, health practitioners, and community members, and for training.

Overall, health services and health practitioners in WA, including those who choose not to participate, will need to prepare for the state’s introduction of voluntary assisted dying.

Should all aged-care residents with COVID-19 be moved to hospital? Probably, but there are drawbacks too

COVID-19 is continuing to devastate Victorian aged-care homes, with 1,435 active cases now linked to the sector, and at least 130 residents having died.The question of whether to automatically move...

how COVID-19 has changed the way we work

ShutterstockOne of the many things COVID-19 has had a dramatic impact on is the way many of us work.Those fortunate enough to be able to work from home have been...

For a long time, the answer has been yes. When Saturday Night Live, John Oliver and the satirical establishment railed at him, the president’s supporters were only strengthened in their...

On SundaYour heading here, New Zealand will mark 100 days without community transmission of COVID-19.From the first known case imported into New Zealand on February 26 to the last case...

Bingeing Netflix under lockdown? Here's why streaming comes at a cost to the environment

Mollie Sivaram/Unsplash, CC BYCoronavirus lockdowns have led to a massive reduction in global emissions, but there’s one area where energy usage is up – way up – during the pandemic:...

A big part of the Morrison government’s response to COVID-19 has been allowing people early access to their superannuation. Australians who have claimed hardship have applied for A$30.7 billion to...

how did the first person evolve?

ShutterstockHow did the first person evolve? Mabel, age 7, Anglesea, Victoria.Hi Mabel, what a great question! We know humans haven’t always been around. After all, we wouldn’t have survived alongside...

Why public housing is stigmatised and how can we fix it

Social and public housing is intensely stigmatised in Australia and has been for several decades. Estates in particular are often labelled “ghettos”, framed as places of danger, drugs and vice.This...

ShutterstockThe federal government’s proposed increase in the cost of studying humanities and communications degrees at Australian universities has stirred much debate. One aspect that should not be overlooked is that...

COVID divides the nation and isolates MPs from Victoria

COVID-19 has now made us two Australias. There’s Victoria – most specifically Melbourne – and then there’s the rest of the country.Melbourne’s extraordinary lockdown complete with curfew is an act...

Lebanon did not need one of the world’s most horrific accidental detonations to remind people it is a state teetering on the edge of collapse.However, the destructive power of 2,750...

We need to Close the Gap on health. But even official dietary advice disadvantages Indigenous people

ShutterstockRecently announced Closing the Gap targets aim to improve the health and well-being of Indigenous people.But if that’s to happen, we need to provide health advice suitable for First Nations...