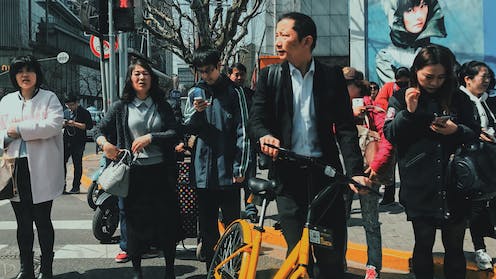 Australian 15 year olds were around three and a half years behind their counterparts in China in maths, according to the OECD’s latest results for education systems around the world.

The four cities of China (Beijing, Shanghai, Jiangsu and Zhejiang) that participated in the Programme for International Student Assessment (PISA) topped the league tables in maths, science and reading.

These four cities don’t represent China as a whole, but their combined size is comparable to a typical OECD country. However, it’s important to mention China’s PISA results don’t reflect the huge number of students living outside the big cities.

Many Westerners believe Chinese students are superseding them because of their Confucian values which see students as hardworking, disciplined and therefore teachable.

But my research into middle-class parents in Shanghai shows they find traditional schools too rigid. They want their children to be globally-minded and adopt values those schools don’t focus on as much – like self-discovery and creativity.

My two-year research involved interviews with a group of 46 middle-class Chinese parents in Shanghai.

China’s rapid social and economic transformation means it’s fast becoming a middle-class nation with significant spending power. Only 4% of China was made up of middle-class urban households in 2000, but this is estimated to soar to 45% by 2022.

I chose to interview these parents because they represent the recent shift in the educational landscape in Chinese cities. The parents I interviewed are demanding a world-class education for their children. While academic achievement, such as that evidenced by PISA scores, is important to them, they all said the local Chinese school system was too rigid and exam-oriented.

These parents are more accepting of a Western-style education because they believe it will give their children an “edge” and grant them access to international opportunities.

They have enrolled their kids in what are called “hybrid” or “East-meets-West” schools. Here, Chinese students learn subjects such as maths, Chinese language and values education from local teachers. But they also study for the International Baccalaureate or the General Certificate of Education at Advanced-Level (the higher school certificate in the UK).

Subjects such as English, arts, music, physical education and philosophy within these curricula are taught by Western expatriate teachers and Chinese bilingual teachers.

The parents who send their children to such schools also value extra-curricular activities and overseas holiday study tours for their children. These extra curriculum activities aren’t just “cram school”. They include drama, dance, singing, sports, and learning one or two musical instruments.

China’s one-child policy (which ended in 2015) means parents feel more pressure for their child’s success. The modern Chinese family has an inverted family structure, known as the “4-2-1” (four grandparents, two parents and one child).

The Shanghai middle-class parents in my study were mostly single children themselves. This partly explains why education, and the desire to ensure their child has good job prospects, is so vital for them, as they support their elderly parents alone, and their children are expected to also.

Still, the parents I interviewed placed more emphasis on developing their children’s global mindsets and intercultural competence than just having them attain good academic results.

Mrs Xuan told me her ten-year-old son’s school “exposed (him) to various Western teachers’ way of speaking and communicating […] They have taught him how to communicate better and think differently”.

I want to give my child different options that will allow him to see multiple perspectives and know how to find his own direction.

Another parent, Ms Ju, who owns a private business believes a “good” education involves giving her 11-year-old daughter an opportunity to experience being “under-pressure, but not just at school.

I don’t want my child to just focus on doing well academically which is why […] she is playing piano competitively outside school so that she can learn how to manage her time and improve herself.

Professor Zheng, an engineering academic, talked about his experience of teaching an increasingly diverse university student cohort in his elite Chinese university.

He believes his role is to prepare his son (who was eight years of old when I interviewed him) for a world that is becoming a "global village”:

My son and his generation will see the world differently from my parents and me because of the technological and economic advancements that he is now experiencing. […] Through travelling, he understands what cultural diversity is and gets to learn how to live in a globalised world.

Other studies on Chinese parents who send their children to international schools have suggested they offer a haven for domestic students from the competitive and discriminatory features of the Chinese educational system.

Education is more complex than what we see on the PISA chart. Shanghai parents’ aspirations for their children show they are leaning towards the kind of educational system countries like Australia are known for.

Should all aged-care residents with COVID-19 be moved to hospital? Probably, but there are drawbacks too

COVID-19 is continuing to devastate Victorian aged-care homes, with 1,435 active cases now linked to the sector, and at least 130 residents having died.The question of whether to automatically move...

how COVID-19 has changed the way we work

ShutterstockOne of the many things COVID-19 has had a dramatic impact on is the way many of us work.Those fortunate enough to be able to work from home have been...

For a long time, the answer has been yes. When Saturday Night Live, John Oliver and the satirical establishment railed at him, the president’s supporters were only strengthened in their...

On SundaYour heading here, New Zealand will mark 100 days without community transmission of COVID-19.From the first known case imported into New Zealand on February 26 to the last case...

Bingeing Netflix under lockdown? Here's why streaming comes at a cost to the environment

Mollie Sivaram/Unsplash, CC BYCoronavirus lockdowns have led to a massive reduction in global emissions, but there’s one area where energy usage is up – way up – during the pandemic:...

A big part of the Morrison government’s response to COVID-19 has been allowing people early access to their superannuation. Australians who have claimed hardship have applied for A$30.7 billion to...

how did the first person evolve?

ShutterstockHow did the first person evolve? Mabel, age 7, Anglesea, Victoria.Hi Mabel, what a great question! We know humans haven’t always been around. After all, we wouldn’t have survived alongside...

Why public housing is stigmatised and how can we fix it

Social and public housing is intensely stigmatised in Australia and has been for several decades. Estates in particular are often labelled “ghettos”, framed as places of danger, drugs and vice.This...

ShutterstockThe federal government’s proposed increase in the cost of studying humanities and communications degrees at Australian universities has stirred much debate. One aspect that should not be overlooked is that...

COVID divides the nation and isolates MPs from Victoria

COVID-19 has now made us two Australias. There’s Victoria – most specifically Melbourne – and then there’s the rest of the country.Melbourne’s extraordinary lockdown complete with curfew is an act...

Lebanon did not need one of the world’s most horrific accidental detonations to remind people it is a state teetering on the edge of collapse.However, the destructive power of 2,750...

We need to Close the Gap on health. But even official dietary advice disadvantages Indigenous people

ShutterstockRecently announced Closing the Gap targets aim to improve the health and well-being of Indigenous people.But if that’s to happen, we need to provide health advice suitable for First Nations...