Apple has released its new smartphone, the iPhone 12, without an accompanying charger or earbuds. Users have harshly criticised the company for this move and will have to purchase these accessories separately, if needed.

While some see it as cost-cutting, or a way for Apple to profit further by forcing customers to buy the products separately, the technology giant said the goal was to reduce its carbon footprint.

This is the first time a major smartphone manufacturer has released a mobile without a charger. Earlier this year, reports emerged of Samsung considering a similar move, but it has yet to follow through.

But even if abandoning chargers is a way for Apple to save money, the action could have a significant, positive impact on the environment.

Australians, on average, buy a new mobile phone every 18-24 months. In Australia, there are about 23 million phones sitting unused — and therefore likely a similar number of accompanying chargers.

You can reuse a shopping bag, so why not your phone charger?

Just over a decade ago, Australia started to ban single-use plastic bags, starting with South Australia. Today, every state and territory in Australia has enforced the ban except New South Wales — which intends to do so by the end of 2021.

Since South Australia implemented its ban in 2008, state government estimates suggest it has avoided 8,000kg of marine litter each year — and abated more than 4,000 tonnes of greenhouse gas emissions.

The benefits for the environment have been clear. So, why are we so hesitant to do the same for e-waste?

E-waste is a real, but fixable, environmental issue

E-waste includes different forms of discarded electric and electronic appliances that are no longer of value to their owners. This can include mobile phones, televisions, computers, chargers, keyboards, printers and earphones.

Currently there are about 4.78 billion mobile phone users globally (61.2% of the world’s population). And mobile phone chargers alone generate more than 51,000 tonnes of e-waste per year.

On this basis, the environment would greatly benefit if more users reused phone chargers and if tech companies encouraged a shift to standardised charging that works across different mobile phone brands.

This would eventually lead to a reduction in the manufacturing of chargers and, potentially, less exploitation of natural resources.

Who needs a charger with an Apple logo anyway?

Citing an increase in e-waste and consumer frustration with multiple chargers, the European Parliament has been pushing for standardised chargers for mobile phones, tablets, e-book readers, smart cameras, wearable electronics and other small or medium-sized electronic devices.

This would negate the need for users to buy different chargers for various devices. 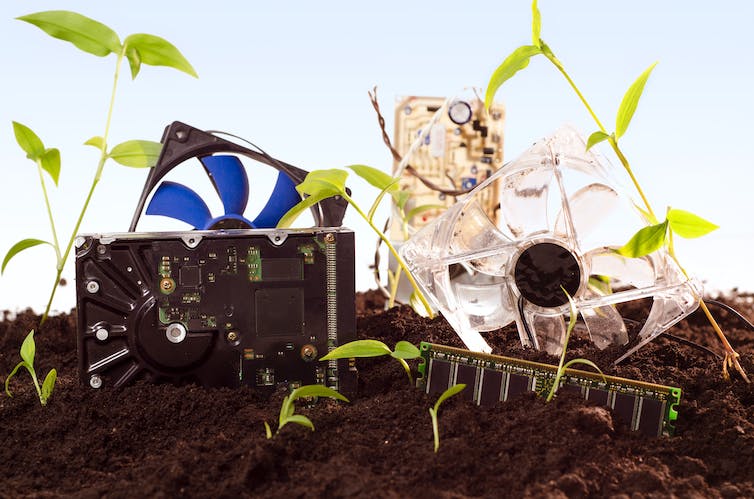 Digital consumption is on the rise and unlikely to slow down any time soon. Recycling is one option, but how else can tech companies innovate to reduce environmental harm? Shutterstock

Of course, there’s no doubt phone companies want people to regularly buy new phones. Apple themselves have been accused of building a feature into phones that slows them down as they get older. Apple responded by saying this was simply to keep devices running as their batteries became worn down.

But even if this is the case, Apple’s decision to ship phones without chargers would still reduce the use of precious materials. A smaller product box would let Apple fit up to 70% more products onto shipping pallets — reducing carbon emissions from shipping.

However, it remains to be seen exactly how much this would assist in Apple’s environmental goals, especially if many consumers end up buying a charger separately anyway.

Apple equates its recent “climate conscious” changes to the iPhone 12 with removing 450,000 cars from the road annually. The company has a target of becoming carbon-neutral by 2030.

Are wireless chargers the answer?

It’s worth considering whether Apple’s main incentive is simply to cut costs, or perhaps push people towards its own wireless charging devices.

These concerns are not without merit. Apple is one of the richest companies in the world, with most of its market capital made with hardware sales.

Without a shift to a standardised plug-in charger, a wireless charging boom could be an environmental disaster (even though it’s perhaps inevitable due to its convenience). Wireless charging consumes around 47% more power than a regular cable.

This may be a concern, as the sustainability advantages of not including a charger could come alongside increased energy consumption. Currently, the Information, Communication and Technology (ICT) sector is responsible for about 2% of the world’s energy consumption. 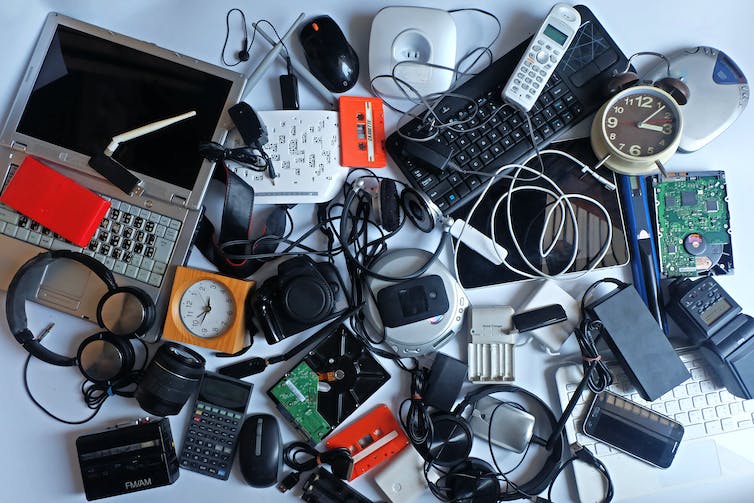 How many unused devices do you have lying around the house? Shutterstock

The case for a universal plug-in charger

Perhaps one solution to the dilemma is device trade-in services, which many companies already offer, including Apple and Samsung.

Apple gives customers a discount on a new device if they trade in their older model, instead of throwing it out. Similar services are offered by third parties such as Optus, Telstra, MobileMonster and Boomerang Buy Back.

Ultimately, however, the best solution would be for tech giants to agree on a universal plug-in charger for all small or medium-sized electronic devices, including mobile phones.

And hopefully, just as we all now take reusable bags to the grocer with us, in a few years we’ll be able to use a common charger for all our devices — and we’ll wonder what all the fuss was about.

Read more: Apple releases fast 5G iPhones, but not for Australia. And we're lagging behind in getting there