Throughout the COVID-19 pandemic, many have felt anxious about going to the GP and other health facilities, believing these places have had a greater risk of transmission. A lot of us have also had to juggle work, childcare and home-based education.

So it’s not surprising the number of women attending for preventive health checks dropped alarmingly. For example, 145,000 fewer breast cancer screenings were done between January and June this year than in the same period in 2018. It’s important, however, not to let the pandemic lead to avoidable poor health.

Here are some of the main health checks the the Royal Australian College of General Practitioners (RACGP) recommends for women. These checks are advised for women at average risk, but women who have a strong family history of any of these conditions should ask with their GP if they should start screening earlier or seek different types of testing.

In December 2017, a new test was introduced for cervical cancer screening in Australia, and the testing interval changed from two years to five years. The change in testing interval was recommended because the new test is able to detect changes earlier. This means fewer women are tested each month, with the decline starting from December 2019.

Even accounting for this, the number of women tested in April and May 2020 fell sharply. There was some recovery in June, although rates in Victoria remain low. It used to be common practice to do a pelvic examination at the same time as a cervical screening test to look for problems in the uterus and ovaries, but this is no longer recommended due to its poor accuracy. 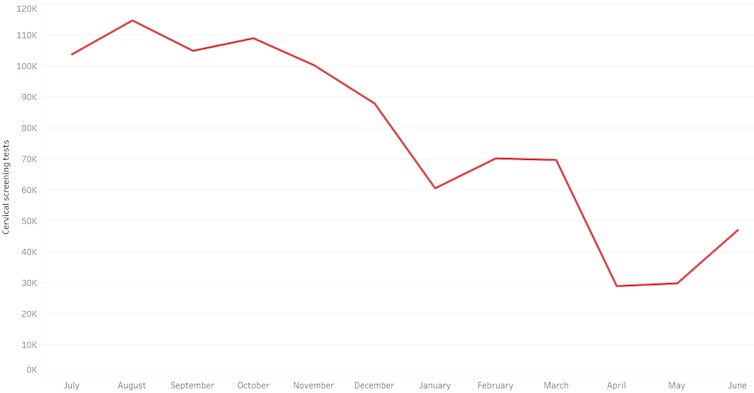 Breast Screen Australia recommends an x-ray of the breasts, called a mammogram, every two years for women aged 50-74. Breast screening services were paused in April, but are now open again in all states, including Victoria.

Evidence for the benefits and harms of breast screening has been highly contested, so it’s important women make an informed choice. Cancer Australia states that for every 1,000 women screened for 25 years from the age of 50, around eight will avoid dying of breast cancer. On the other hand, eight women in every 1,000 diagnosed by screening will be treated unnecessarily (usually with surgery) for cancers that would never otherwise have been diagnosed.

Screening works by finding a cancer before a woman has any symptoms, but it also finds cancers that grow very slowly or even regress, and that would never have caused symptoms. More sensitive tests, such as MRI, find more of these “overdiagnosed cancers” than other tests.

Breast cancer survival has improved significantly in the past few decades, but most of this seems to be due to improvements in treatment rather than improvements in screening.

Unfortunately, there is no method for early detection of ovarian cancer and the symptoms can be vague, often leading to late diagnosis.

Women who have any of these symptoms for more than a few weeks should see their GP.

About 1 in 20 women in their 20s will have a chlamydia infection and 1 in 200 will have gonorrhoea. These increase the risk of pelvic inflammatory disease and infertility. HIV, Hepatitis B and syphilis are less common, but important to detect early.

There is no formal screening program but the RACGP encourages sexually active women younger than 30 to have regular testing, especially if there has been a change in sexual partner.

The leading causes of death in women in Australia are dementia, heart attacks, strokes, and lung cancer. The risks of these can be reduced with good preventive health. 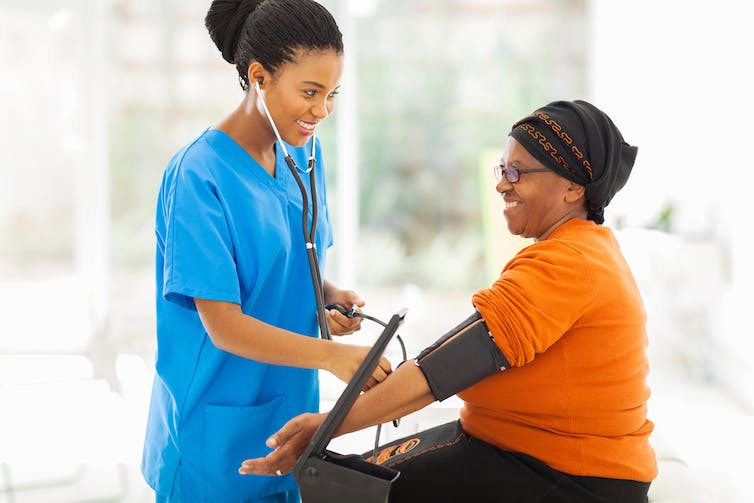 Women shouldn’t forget to get their blood pressure and cholesterol regularly checked. Shutterstock

The RACGP recommends women have their blood pressure checked every two years from age 18, cholesterol every five years from age 45, and checks for diabetes and kidney disease when at risk (for example if you have a family history). GPs recommend a general health check for those aged 45 to 49, or a heart health check for those over 45, or Aboriginal or Torres Strait Islander people over 30.

Treating high blood pressure and cholesterol and reducing smoking rates has prompted a massive decline in Australian heart disease deaths since their peak in the 1960s. However, women are less likely to have all risk factors for heart disease checked, and younger women are less likely to be put on blood pressure or cholesterol-lowering medication than men with the same risk level.

GPs have worked hard to ensure their patients’ safety during the COVID-19 pandemic. But it’s also important the recommended preventive health checks are not delayed unnecessarily.

Home-delivered food has a huge climate cost. So which cuisine is the worst culprit?

ShutterstockOver the past few years, Australians have embraced online food delivery services such as UberEats, Deliveroo and Menulog. But home-delivered food comes with a climate cost, and single-use packaging is...

The Conversation, CC BYWe’ve probably all been there. We buy some new smart gadget and when we plug it in for the first time it requires an update to work.So...

To learn at home, kids need more than just teaching materials. Their brain must also adapt to the context

ShutterstockResearch during the first phase of remote teaching in Victoria reported some students found the workload “too high”, missed interactions with peers, felt their thinking ability was impaired, and reported...

Circa's Humans 2.0 is a visceral delight

Do you feel undervalued and overworked? COVID-19 is likely to affect the employed too

ShutterstockThere’s no question the rising rate of unemployment is one of the worst consequences of the COVID-19 pandemic. The number of Australians seeking work is heading towards 10%, almost double...

restoring trade with China in a hostile political environment

The new trade minister, Dan Tehan, has been handed one of the Morrison government’s most demanding roles. Despite a lot of chest-thumping in government circles about the need to stand...

Despite appearances, this government isn't really Keynesian, as its budget update shows

It is tempting to think the Australian government’s decision to spend big – bigger than ever before, an unprecedented 33% of GDP this financial year according to the budget update...

The Pfizer vaccine may not be the best choice for frail people, but it's too early to make firm conclusions

Reports of about 30 deaths among elderly nursing home residents who received the Pfizer vaccine have made international headlines.With Australia’s Therapeutic Goods Administration (TGA) expected to approve the vaccine imminently...

Curious kids: how do gills work?

David Clode/Unsplash, CC BYHow do gills work? Tully, aged 7Great question, Tully! Animals on land breathe air, which is made up of different gasses. Oxygen is one of these gases...

There's no such thing as 'alternative facts'. 5 ways to spot misinformation and stop sharing it online

ShutterstockThe blame for the recent assault on the US Capitol and President Donald Trump’s broader dismantling of democratic institutions and norms can be laid at least partly on misinformation and...

As Trump exits the White House, he leaves Trumpism behind in Australia

Mick Tsikas/AAPThrough recent natural disasters, global upheavals and a pandemic, Australia’s political centre has largely held. Australians may have disagreed at times, but they have also kept faith with governmental...