On October 31, Queensland will become Australia’s first state to go to the polls during the pandemic.

Normally, state elections pass amiably. They matter to the MPs, ministers and senior public servants concerned. But aside from what the tea leaves might imply for national electoral politics, they cast few ripples.

This year is different. State governments matter now, in ways they have not for decades.

This does not mean the Queensland election will produce any shocks. On the contrary. The pandemic has been good for incumbents.

Leaders, Australia-wide, are enjoying high approval ratings during the pandemic. During the tumult of the first wave, a Liberal National Brisbane City Council was returned with not a single ward changing hands.

In the past two months, Labor governments have been re-elected in the Northern Territory and Australian Capital Territory.

Read more: Blunders aside, most Australians believe state premiers have been effective leaders during pandemic

The Palaszczuk government will, I bet, be similarly returned. Whether it deserves to, after five quiet years and given a challenging economic climate, is another matter. But it has one trump card: north of the Tweed, barely one person in a million has died of COVID-19.

This puts Queensland in a select group of democratic jurisdictions of any significant size. Only Taiwan and East Timor have done better on that metric, and they are more communal and less individualistic than Queenslanders.

There has been a fundamental shift

Why then is 2020 different? In all the focus on statistics — health, economic and electoral — we’ve paid little attention to a fundamental shift. State governments, long relegated to second or third order by our escalating focus on international and national politics, have soared back to prominence. 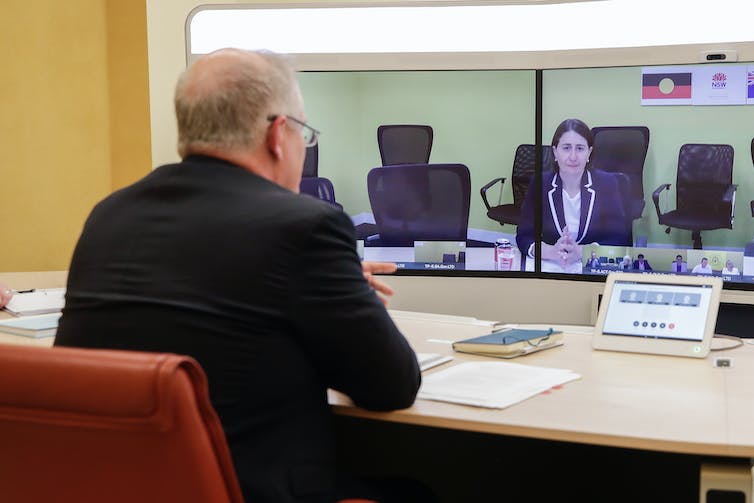 States have important powers and have had to use them during the pandemic.

This reminds us that we live within a federal system of government, and this affects our daily lives. Not just in the lofty and indirect sense — how the Commonwealth carves up GST amongst the states, for example — but in an everyday sense.

The cause of all this should be obvious. States have what constitutional lawyers call the “policing power”. Not only can they police individuals under criminal law, they can also make movement and gathering orders.

Read more: Have our governments become too powerful during COVID-19?

States also have the power to license (or limit) businesses and other organised activities. In the pandemic, those powers have been front and centre of the public health response.

Previously, we had come to see state borders as fusty lines from colonial times. Yet right now, the sorest issue in Australian politics involves those lines being taken seriously.

The High Court, at the behest of Clive Palmer, may yet unwind such controls. But it will be years before we return to conceiving of state borders as merely lines on a map.

Pre-COVID, states had come to be seen as mere service providers, akin to local government in the UK with their local health boards and educational authorities.

Constitutional lawyers have a term for this — “vertical fiscal imbalance”. The federal government collects about 80% of tax revenue, so it can play puppeteer, in everything from education to roads.

It is not that money is unimportant in the pandemic. Indeed, money has reinforced the Commonwealth government’s focus on macroeconomics and social security during COVID-19. Meanwhile, its other great leitmotif is national security.

So, we came to see the states as service deliverers and the federal government as holding the purse strings and looking after defence. This is even reflected in a more “blokey” politics at national level and a more nurturing one at state level, where female leaders are much more common. 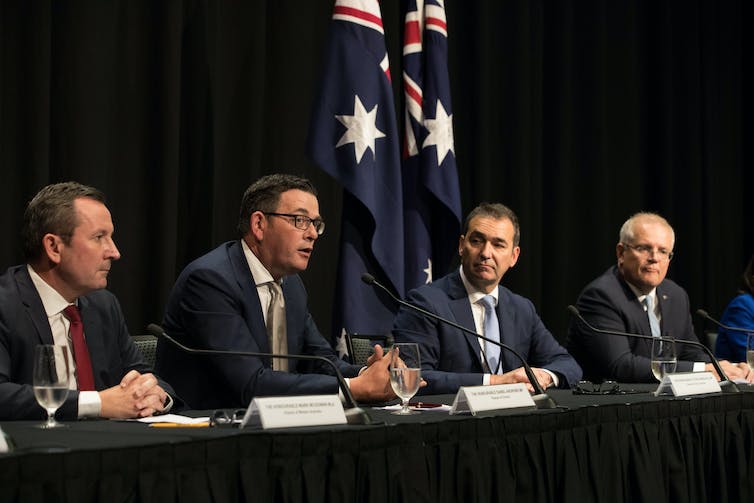 States have traditionally been viewed as the service deliverers, with the federal government holding most of the money. Mark McCormack/AAP

However, the “social-democratic states”/“conservative nation” contrast can be taken too far. Palaszczuk has positioned herself as a resolute Border Queen. This invokes the ghosts of parochial predecessors, like Peter Beattie and Joh Bjelke-Petersen, as much as it appeals to the trope of the mother figure, worrying about her constituents’ health.

The states are back

In short, the states are back at the forefront. While this may wane as we transcend the pandemic, it will also recur as other natural disasters become more common, thanks to global warming.

States and their leaders have taken centre stage during COVID-19. Mark McCormack/AAP

Alongside the rebound in the role of the states, national attention has also fallen on the style of leadership that is more common at state level.

Palaszczuk, like her NSW counterpart Gladys Berejiklian, is ideologically centrist but presents a velvet glove over an iron fist.

That style may yet infuse national politics. That will depend on whether a communal spirit, of pulling together, survives from the pandemic to counterbalance interest group warfare.

Meanwhile, Queensland is about to decide whether to endorse Palaszczuk’s leadership, or embrace a different one.

Read more: Remember Quexit? 5 reasons you should not take your eyes off the Queensland election

Authors: Graeme Orr, Professor of Law, The University of Queensland

Home-delivered food has a huge climate cost. So which cuisine is the worst culprit?

ShutterstockOver the past few years, Australians have embraced online food delivery services such as UberEats, Deliveroo and Menulog. But home-delivered food comes with a climate cost, and single-use packaging is...

The Conversation, CC BYWe’ve probably all been there. We buy some new smart gadget and when we plug it in for the first time it requires an update to work.So...

To learn at home, kids need more than just teaching materials. Their brain must also adapt to the context

ShutterstockResearch during the first phase of remote teaching in Victoria reported some students found the workload “too high”, missed interactions with peers, felt their thinking ability was impaired, and reported...

Circa's Humans 2.0 is a visceral delight

Do you feel undervalued and overworked? COVID-19 is likely to affect the employed too

ShutterstockThere’s no question the rising rate of unemployment is one of the worst consequences of the COVID-19 pandemic. The number of Australians seeking work is heading towards 10%, almost double...

restoring trade with China in a hostile political environment

The new trade minister, Dan Tehan, has been handed one of the Morrison government’s most demanding roles. Despite a lot of chest-thumping in government circles about the need to stand...

Despite appearances, this government isn't really Keynesian, as its budget update shows

It is tempting to think the Australian government’s decision to spend big – bigger than ever before, an unprecedented 33% of GDP this financial year according to the budget update...

The Pfizer vaccine may not be the best choice for frail people, but it's too early to make firm conclusions

Reports of about 30 deaths among elderly nursing home residents who received the Pfizer vaccine have made international headlines.With Australia’s Therapeutic Goods Administration (TGA) expected to approve the vaccine imminently...

Curious kids: how do gills work?

David Clode/Unsplash, CC BYHow do gills work? Tully, aged 7Great question, Tully! Animals on land breathe air, which is made up of different gasses. Oxygen is one of these gases...

There's no such thing as 'alternative facts'. 5 ways to spot misinformation and stop sharing it online

ShutterstockThe blame for the recent assault on the US Capitol and President Donald Trump’s broader dismantling of democratic institutions and norms can be laid at least partly on misinformation and...

As Trump exits the White House, he leaves Trumpism behind in Australia

Mick Tsikas/AAPThrough recent natural disasters, global upheavals and a pandemic, Australia’s political centre has largely held. Australians may have disagreed at times, but they have also kept faith with governmental...