If Pope Joan — the infamous female pope of the 9th century – didn’t exist, you can see why someone would have had to invent her.

For the Catholic Church, she became a story of why women should not be allowed to hold power; for the Protestants, she was a helpful argument against falsehoods embedded in the papacy.

A woman who inveigled her way onto St Peter’s throne, some said the “Popess” was English; others German. A popular medieval version of her tale has her gender “discovered” during a papal procession because she gives birth while trying to mount her horse.

Was Joan real? Probably not. Does it matter? Probably not that much either. Her story tells us something important about wider attitudes to sex and gender in pre-modern Christian Europe.

But the story’s on-going popularity also reveals something of our own fascination with arcane and seemingly rigid gender-boundaries in the Catholic Church.

A figure of satire

Likely, Joan was born of a very Roman love of satire. Romans have excoriated political leaders for centuries by posting humorous verses on the so-called “talking statue” of Pasquino outside Piazza Navona.

Gendered tropes and sexual obscenities commonly punctuated these literary efforts. The humanist Niccolò Franco (1515-70) penned one which began “the pope, and all his prelates, are buggers.”

Pope Pius V had him executed.

A 17th-century pamphlet memorably imagines the cardinals in an on-going conclave as whores who fight for control of the bordello. 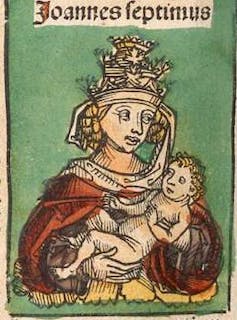 Joan is just the grand old dame of such creations.

Joan’s story first appeared in the chronicle of a Dominican friar in 1255. However, it is probably a century older from a period of upheaval when popes sought to consolidate their rule over Rome.

Many Romans resisted the pope’s encroaching authority and used Joan as a weapon to mock their priestly overlord. They drew on past scandals, notably the 10th century’s “pornocracy” or “rule of the harlots” when the papacy came under the control of Theodora, wife of the Roman consul Theophylactus, and her daughter Marozia.

Joan’s story can be read as an allegory for those events when a woman really had been in control.

Early Christians fused Greek philosophy with Jewish lore – but they took their sexual ethics from Aristotle, who was not altogether keen on the pleasurable act.

Joan, the promiscuous she-pope whose cervix dilated in the midst of performing sacred duties, was the very antithesis of the proper Christian virgin. 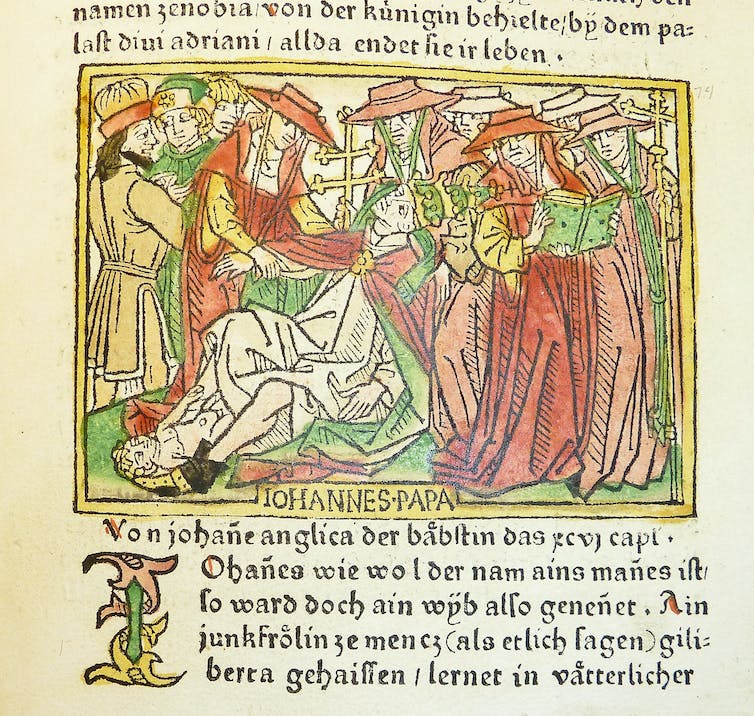 16th-century Reformation Protestants seized on this contrast with Christian teachings to cite her as evidence of the papacy’s essentially corrupt nature: verily, she linked it to the biblical Whore of Babylon.

Yet Catholics saw a different parallel for Joan: Queen Elizabeth I of England, a woman who never married nor produced an heir. Her Act of Supremacy (1559) had set her up as “Popess” of her own Anglican Church.

Joan and Elizabeth were painted as heretics, going against Church teachings. And, asked the Catholics, could Elizabeth really be any purer or more virginal than the Joan of legend?

What makes a man?

Both Protestants and Catholics also asked: could a woman really have fooled men in the way Joan is said to have done?

Protestants — adamant she really existed — reached into the historical record for examples of female cross-dressing such as Joan’s notorious namesake Joan of Arc.

Some speculated beardless Italians were so effeminate that Joan’s deception of them was quite believable. Others pointed to the wealth of accounts of Joan’s life in chronicles from before the Reformation which they thought impossible to refute. 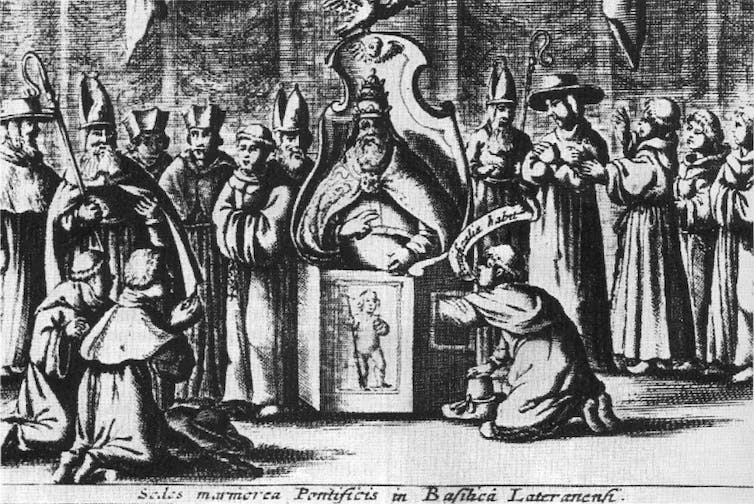 An illustration of the 1644 coronation of Pope Innocent X, as the new pope sits in the sedia stercoraria to have his testicles examined. Wikimedia Commons

They even found support in descriptions by Renaissance humanists of the sedia stercoraria, a seat with a hole in its centre used in papal coronations.

Was its purpose to check the new pope’s genitalia, they asked? And why would this need to be proven, unless that had ever been questioned?

By the 18th century a consensus gradually emerged among both Catholics and Protestants that Joan’s life was purely fictional. However, today Joan continues to inspire as both sensation and symbol.

Some consider Joan a feminist pioneer, others see her as an early transgender figure.

Two Pope Joan films, in 1972 and 2009, present her as a feminist character. And Rihanna showed up to the 2018 Met Gala in a gender-bending pope outfit that strongly implied this, too.

But a transgender Joan has now had her own play and inspired the crowning cliché in Robert Harris’ thriller Conclave (2016).

As the Catholic Church finally confronts the yawning gap between the views of the Catholic faithful and its own teachings on sex and gender, Joan could be a pope for the 21st century.

Earlier this month a French nun became the first woman to hold a voting position at the Vatican.

But an actual female pope presiding over mass in St Peter’s? Don’t count on her any time soon.