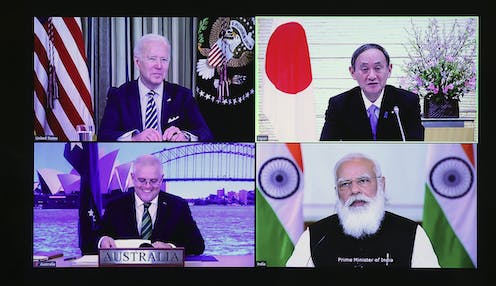 On Friday, the leaders of Australia, India, Japan and the US will meet in Washington for the first in-person Quad summit.

Hosted by US President Joe Biden, the attendees are slated to discuss a series of big issues, from COVID-19 to cybersecurity, but China will dominate the conversation.

So, what exactly is the Quad and what is it aiming to do?

The Quad first came together in May 2007, when diplomats from the four countries convened on the sidelines of an Association of Southeast Asian Nations (ASEAN) meeting in the Philippines for an exploratory discussion.

The idea was to see if the participants could build on work they were already doing in other forums — notably the Trilateral Security Dialogue involving Australia, Japan, and the US.

Their aim was to improve cooperation between the democracies in the Indo-Pacific region to manage China’s growing power and ambition.

This initial discussion did not get far. Beijing reacted angrily and lodged formal diplomatic protests. Questions were asked in all four capitals about the wisdom of the project.

Then, changes of government in both Canberra and Tokyo put paid to any further meetings for a decade.

When the Quad re-emerged in November 2017, it did so in the same place — in Manila, on the sidelines of the East Asia Summit.

But this time around, the participants were determined to keep the group together and develop it into something more substantive.

Since then, the Quad has evolved in leaps and bounds. For the first two years, officials from the four countries met regularly. In September 2019, they added a foreign ministers’ meeting into the calendar, holding the first discussion at the United Nations in New York.

In March 2020, they branched out, convening a “Quad plus” phone conference to discuss responses to COVID-19 with three other countries: New Zealand, South Korea, and Vietnam (the then-chair of ASEAN).

A year later, a newly inaugurated Biden convened a virtual Quad leaders’ meeting, paving the way for the first in-person summit this week.

Sometimes labelled an “Asian NATO”, the Quad is actually something very different.

For a start, it is not an alliance underpinned by a treaty. It does not commit its members to collective security – they are not bound to defend each other in a conflict. The Quad does not engage in joint military planning, nor does it have a dedicated military staff (as NATO does at its sprawling new headquarters in Brussels).

Instead, the Quad is a diplomatic forum for the members to share their concerns about regional issues and discuss ways to cooperate between them or with others outside the group.

As a result, it has a very broad agenda, running far beyond just defence cooperation.

Back in late 2017, the Quad focused on four issues related to sustaining a regional “rules-based order”.

The first was maritime security, fuelled by a shared concern about China’s militarisation of the artificial islands it had built in the South China Sea and the prospect Beijing may try to control air and sea traffic in that area.

The second was “connectivity” — code for China’s ambitious Belt and Road Initiative, which aims to build infrastructure and boost influence around the world. The final two issues were counter-terrorism and North Korea’s nuclear weapons.

Since that initial meeting, several other topics have been added into the mix. Cyber issues found their way onto the agenda in 2018, reflecting mutual anxiety about espionage, disinformation and the security of digital infrastructure.

Economic growth and development followed a year later, as well as cooperation with regional organisations like ASEAN.

COVID-19 became a core concern in 2020, along with supply chains, so-called critical minerals and the resilience of critical infrastructure.

At the virtual leaders’ meeting in March 2021, working groups were established on COVID vaccines, technology and climate change.

The Quad has been criticised for many things, notably for being exclusive, failing to deliver tangible outcomes, and feeding China’s strategic paranoia.

Read more: Why pushing for an economic 'alliance' with the US to counter Chinese coercion would be a mistake

There is unease in southeast Asia in particular about its potential impact on regional stability.

One task of the Washington meeting will be to address some of these concerns and better explain what the Quad is, what it is not, and how it works. This won’t be easy.

Fundamentally, the Quad is still driven by mutual concerns about China. Its purpose is to find ways to work together to prevent Beijing from creating an Indo-Pacific region in which it

But, of course, this can’t be said openly, in so many words.