This story contains spoilers for Once Upon a Time in Hollywood.

While promoting Once Upon a Time in Hollywood at the Cannes Film Festival, filmmaker Quentin Tarantino was asked why Margot Robbie’s character – murdered actress Sharon Tate – was given so few lines. An “angry-looking Tarantino”, as reported the ABC, curtly replied: “Well, I just reject your hypothesis.”

Tate’s implied lack of voice and Tarantino’s refusal to address the extreme violence against women in the film has renewed discussions about his representations and treatment of women on screen.

The #MeToo movement and cancel culture have shifted the way we consume media. So what does this mean for Tarantino and his depictions of violence?

25 bloody years on the big screen

Tarantino found instant acclaim with his debut Reservoir Dogs in 1992. Two years later, Pulp Fiction solidified his cult status. Over his 25-year career, he has directed nine films spanning western to blaxploitation to samurai. Across genres, his films are united by the protagonist’s quest for justice and bloody vengeance.

Tarantino is notorious for his stylised and hyperreal violence: macabre, shocking, and comical. When Pulp Fiction first came out, I was a first-year undergraduate studying and making films. I revelled in Tarantino’s approach to storytelling and the film’s originality.

Tarantino was the new King of Cool, and Pulp Fiction heralded a new era of filmmaking. Discussions about the violence mainly revolved around the subject of style and Tarantino’s brand of humour.

25 years later I’m analysing Tarantino again. But now it’s in the context of one of the largest social activist movements in contemporary history.

Tarantino has come under the #MeToo spotlight mainly because of his close partnership with Miramax and The Weinstein Company, both co-founded by Harvey Weinstein (currently facing multiple counts of rape and sexual assault)link, and the distributors of most of Tarantino’s films.

Read more: What the Harvey Weinstein case tells us about sexual assault disclosure

The controversy, however, goes deeper than guilt by Weinstein-association: Tarantino has admitted being a knowing bystander. In a 2017 interview, Tarantino said: “There was more to it than just the normal rumors, the normal gossip. It wasn’t secondhand. I knew [Weinstein] did a couple of these things.”

Tarantino also faced allegations of misconduct by Uma Thurman, who rose to fame in Pulp Fiction and starred in Kill Bill: Volumes 1 & 2.

In 2018, Thurman spoke about a car crash during the filming of Kill Bill: Volume 1 which caused long-term neck and knee injuries. Despite airing her concerns about safety, Tarantino convinced her to perform the stunt.

Tarantino has since admitted his wrongdoing. 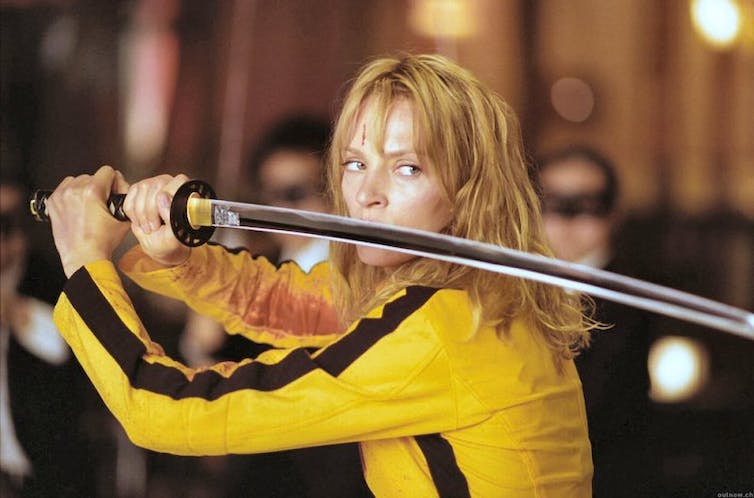 Uma Thurman has spoken out about being pressured to perform dangerous stunts in Kill Bill: Vol 1. Miramax

This is an example of the hypocrisy in Hollywood: Kill Bill was about female empowerment, but its star was being coerced by the director and pressured by the studio.

Read more: Rape is a plot device in western literature, sold back to us by Hollywood

Days after Thurman’s interview, an audio recording resurfaced from 2003 where Tarantino defended director Roman Polanski’s sexual abuse of a 13-year-old victim in 1977. Polanski was 43 at the time.

Alongside the era of #MeToo we have seen a rise in “cancel culture”, where questionable views and actions of influential figures are called out, and audiences are encouraged to withdraw support. Calls for “cancelling” Tarantino are growing.

He may be a groundbreaking filmmaker still breaking records at the box office – but is this enough for us to overlook his indiscretions?

Should we stop watching films connected with problematic individuals? What do we gain from cancelling the works of Tarantino, Polanski, Woody Allen and Bryan Singer from our collective consciousness?

During a screening of Once Upon a Time in Hollywood my mind drifted to these matters.

I wondered if Tarantino still had the same admiration for Polanski as he did in 2003; whether he still holds those skewed ideas about rape.

I was irritated that Emile Hirsch was cast as Jay Sebring - Tate’s close friend and former lover. Hirsch plead guilty to assaulting a female studio executive in 2015.

At a time when abusers are being publicly denounced on social media, did Tarantino have any reservations about this casting choice? Was it even an issue for him?

Despite these questions, I could not suppress my laughter and gasps of gleeful shock at the spectacle of violence in the film’s climax.

And it is violent. The most striking death is when one of the female members of the Manson Family is maimed in the face by a can of dog food, before being fried with a flamethrower.

Over the course of the film, my thoughts continually wandered between the story on screen to the story off screen. Real world politics kept intruding into my viewing experience.

To boycott, or not to boycott

I left the cinema ruminating on the confusing range of emotions and responses I had, ready to unpack how the baggage of Tarantino’s opinions and treatment of female characters and cast members have influenced the way I read Once Upon a Time in Hollywood.

Boycotting a film can send a strong message – not least of all to the studio’s bottom line. But there is also benefit to viewing these films, and using them as talking points for why we find them problematic.

Watching Tarantino now, I still have immense respect for the artistry of his films and their aura of detached coolness. They captured the zeitgeist of a Generation X that was desperate for something different.

But knowing some of the troubling issues surrounding a production and the filmmaker has added another layer of awareness and critique. It has given the films a different sort of relevance for the times. The questions I ask don’t look the same as those I asked before.