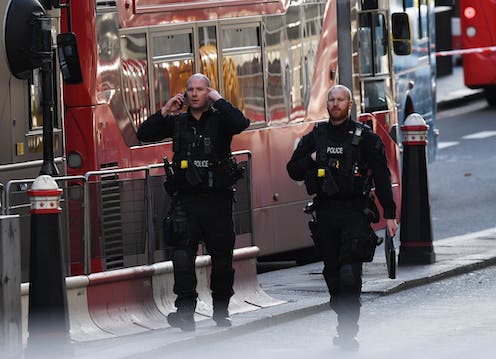 Can prison rehabilitation programs work, and is it sensible to try and rehabilitate seriously radicalised individuals convicted on terrorism charges?

These are questions not just for Great Britain, in the wake of the second London Bridge attack over the weekend, but for the entire world, including Australia and its near neighbours.

There are no easy answers and no simple options. As the numbers of people detained and eventually released on terrorism charges mount up around the world, so too does the question of what to do with them. Politicians find it easy to speak in terms of “lock them up and throw away the key”. But our legal systems don’t allow this and the results, even if allowed, would almost certainly be worse.

Some answers, and some difficult questions, can be found in the lives of four participants in Saturday’s tragic drama in London: Jack Merritt, Saskia Jones, Marc Conway and James Ford.

All four were participating in an event organised to reflect on the first five years of the University of Cambridge’s Learning Together program. Merritt was a young graduate who was helping coordinate the program. Jones was a volunteer in the program. Tragically, their idealism and desire to give back to society saw them lose their lives to a man whom they thought they had been able to help.

Jack lived his principles; he believed in redemption and rehabilitation, not revenge, and he always took the side of the underdog.

In her tribute to her murdered daughter, Jones’s mother said:

Saskia had a great passion for providing invaluable support to victims of criminal injustice, which led her to the point of recently applying for the police graduate recruitment programme, wishing to specialise in victim support.

Jones, 23, and Merritt, 25, were both Cambridge University graduates working at the Learning Together program. They lost their lives to a knife-wielding terrorist murderer who does not deserve to have his name remembered. Their 28-year-old assailant had been released from prison 12 months earlier, having served but eight years of a 16 year sentence.

In a catastrophic system-failure, his automatic release was processed without his case ever being reviewed by a parole board, despite the sentencing judge identifying him as a serious risk who should only ever be released after careful review. He had gamed the system, presenting himself as repentant and reformed.

Conway had formerly served time at a London prison and is now working as a policy officer at the Prison Reform Trust. He witnessed the fatal attack and rushed directly towards the attacker, joining others who sought to pin him down.

Another man participating in the offender rehabilitation event was James Ford. He too saw the attack unfolding and immediately confronted the assailant.

In a deeply tragic irony, the two victims who lost their lives to a man who made a mockery of their idealism were assisted by two others who appear to have genuinely benefited from prison rehabilitation programs. But even here, the complexities and ambiguities of this sort of difficult endeavour were played out as clearly as any playwright could ever conceive of scripting.

Ford was a convicted murderer attending the Learning Together conference on day-release. He had brutally killed 21-year-old Amanda Campion, a young women who was particularly vulnerable because of her intellectual disability. In the eyes of Campion’s family, Ford is no hero.

However, Professor of Criminology at Birmingham City University David Wilson, who chairs the Friends of Grendon Prison program, says that Ford underwent extensive rehabilitation initiatives, including an intensive period of psychotherapy.

I know through my work that people do change and they change as a consequence of innovative but challenging regimes such as the one at HMP Grendon.

In the wake of the attack, UK Prime Minister Boris Johnson said the cases of 74 people released early after being jailed for terror offences will be reviewed. This is certainly sensible and necessary, but much more is required. Indefinite detention is not an option in the majority of cases, and the UK is dealing with hundreds of people convicted of terrorism offences either currently in prison or recently released. https://www.bbc.com/news/uk-48185759

The numbers in Australia are only a fraction of this but still run into the high dozens and are growing every year. For Australia’s near neighbours, Indonesia, Malaysia and the Philippines, the numbers, including projected returnees from the Middle East, run into the thousands.

Read more: How Indonesia's counter-terrorism force has become a model for the region

Professor Ian Acheson, who has advised the government on how to handle extremist prisoners, told the BBC it was not “a question of an arms race on sentencing toughness”, but about what is done when offenders are in custody.

Acheson said his panel’s recommendations had been agreed to but not implemented due to “the merry-go-round of political replacements of secretaries of state”, and the “fairly recalcitrant and unwilling bureaucracy”. He also cited “crazy failed and ideological austerity cuts” to the police, prison and probation services.https://www.bbc.com/news/uk-47225797 https://www.theguardian.com/uk-news/2019/may/02/criminals-going-unpunished-because-of-cuts-says-police-chief https://www.theguardian.com/uk-news/2019/mar/28/britains-police-chiefs-leader-sara-thornton-says-she-wants-end-to-blame-culture

Jack Merritt and Saskia Jones were not naïve idealists. They had studied the problem closely and believed rehabilitation programs could make a difference. Their tragic deaths speak to the challenges involved. To give up and do nothing is not merely cynical, but self-defeating. Without adequate resourcing and reforms the problem everywhere will only become much worse.

PiqselsBullet trains are back on the political agenda. As the major parties look for ways to stimulate the economy after the COVID-19 crisis, Labor is again spruiking its vision of...

Three years on from Uluru, we must lift the blindfolds of liberalism to make progress

Wes Mountain/The Conversation, CC BY-NDThe Uluru Statement from the Heart offered a new compact with all Australians that would reset our national identity and enhance our political legitimacy. But its...

ShutterstockThe demand for online shopping has obviously increased since COVID-19 restrictions were put in place. But less obvious are the subtle psychological drivers behind our collective online shopping splurge. In...

The Bell Shakespeare Company – established with support from the Trust – had to end its touring season of Hamlet early due to coronavirus. Brett BoardmanThe arts and culture sector...

Coronavirus has changed our sense of place, so together we must re-imagine our cities

Is it time to re-imagine our fundamental relationship with cities?People bring cities to life. They interact, work, socialise and travel. Without this, cities are just collections of buildings and infrastructure...

In September 2005, before an audience of some of the most powerful business figures in the United States, then US Deputy Secretary of State Robert Zoellick unveiled his “responsible stakeholder”...

The federal treasury has revised down by a massive $60 billion the estimated cost of the JobKeeper wage subsidy program, from an original $130 billion to $70 billion.Treasury revealed its...

Internet traffic is growing 25% each year. We created a fingernail-sized chip that can help the NBN keep up

This tiny micro-comb chip produces a precision rainbow of light that can support transmission of 40 terabits of data per second in standard optic fibres. Corcoran et al., N.Comms., 2020, CC...

Target's decline is part of a deeper trend

Wesfarmers’ decision to close or rebrand up to 167 of its 284 Target and Target Country stores should not come as too much of a surprise. The once popular store...

The WHO's coronavirus inquiry will be more diplomatic than decisive. But Australia should step up in the meantime

Is it time to reopen our borders? For states still recording new cases, it's too soon

This week, we’ve seen state governments in heated debate over the question of reopening borders between Australian states and territories.New South Wales premier Gladys Berejiklian is arguing for the reopening...