Beekeeping has become hugely popular in recent years, and a new world of beekeeping influencers has recently emerged on TikTok. But it’s not without drama.

Erika Thompson — the bee lady from Texas Bee Works — has gained a following of 6.4 million on TikTok by posting videos of rescuing bee colonies from odd places, including trucks, toilets, and umbrellas. Thompson is at ease in the videos with the colonies, and is frequently not wearing protective clothing, has her hair loose, and handles the bees with her bare hands.

But lately, her videos have been getting backlash from other beekeepers, and fuelled by the media. They say she uses dangerous beekeeping practises, and she isn’t really “saving the bees” as she claims in each video.

We research bee behaviour at the University of Sydney. To us, this backlash is over the top. Thompson is clearly a competent beekeeper who is educating the public about honeybees in her own way on social media. She shows the potential for TikTok to bring interesting biology to the public — and she does it all without getting hurt.

Thompson has been accused of “bee-washing” – when someone claims actions are more bee-friendly than they are, usually by inflating the conservation messaging of honey bees over other more threatened bee species.

This could well be the case, but Thompson wouldn’t be the first nor last person to piggy back on a popular message to boost her business.

Bee hotels are a great bee-washing example. You can buy these nesting boxes from many major stores, including Bunnings and Aldi, yet most native bees are ground nesting and bee hotels may even increase disease transmission if not cleaned between seasons.

Yes, Erika Thompson’s videos don’t show much of the mishaps that sometimes happen with beekeeping. But if she wants to send a positive message about bees and increase her following and business opportunities, it’s unlikely she’s going to show videos involving stings.

As researcher and beekeeper Lewis Bartlett pointed out on Twitter, attacks on Thompson seem to have a basis in misogyny, and some even read as downright envy.

In fact, research from 2018 confirmed women are more likely to get negative comments on YouTube, so it is sadly unsurprising a woman is behind the “controversial” videos.

But why isn’t she getting stung?

Honeybees are the leading cause of hospitalisation from a venomous animal in Australia. So it’s shocking and impressive to see someone scoop up bees with their bare hands.

She’s not the only example of someone undertaking what’s been considered by some to be unsafe practise, with other TikTok users show similar non-gloved practises.

While we don’t recommend people who aren’t beekeepers try this, bees can be beautiful, docile creatures. And it’s clear Thompson knows how to interact with bees and how to avoid being stung.

To prevent stings, Thompson gently handles bees, and is likely carefully choosing which bees to film based on how aggressive the colony is.

Colonies can be selectively bred to be less aggressive, and beekeepers will seek out certain subspecies of bee, such as the Italian subspecies Apis mellifera liguistica, which are popular due to their inherent gentle nature.

If a colony is agitated or aggressive by nature, it may be more likely to sting. If you can smell bananas around bees, you may be smelling their alarm pheromone. Even the weather will impact the mood of the bees — nicer weather brings nicer bees.

Beekeepers often use smokers to calm bees before interacting with them. If you scroll through Thompson’s TikTok feed, you’ll see her wearing protective bee keeping equipment and the presence of smokers in a few videos.

There’s a chance the bees are actually stinging Thompson, but she isn’t bothered by them.

Each person has a different reaction to honeybee stings. Some people have a severe reaction, an anaphylactic response potentially leading to death, while others barely react. 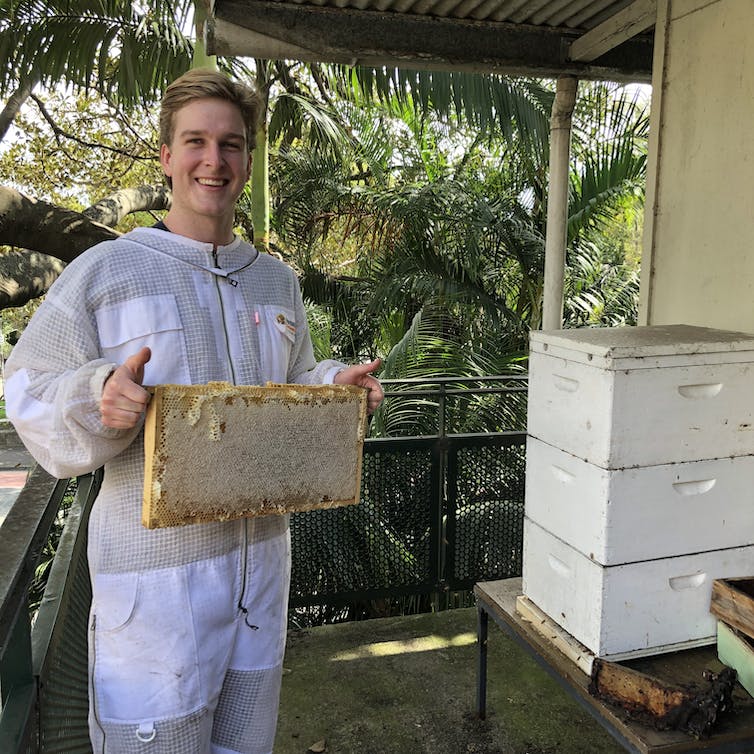 This beekeeper is confident there’s no risk of stings from honeybees, so he has taken off his hood and gloves. Sebastian Croker, CC BY-NC 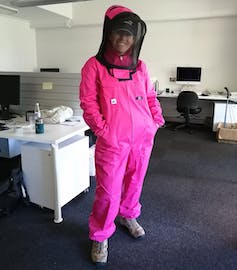 Thompson has proven her skills as an engaging educator on honeybee health and biology, filling her videos with interesting facts about honeybees and explaining their behaviours.

Her videos often end with “save the bees” messaging, but her focus on honeybees can take away from the importance of native bees.

In North America, many native bees, such as the rusty patched bumblebee, face significant threats.

Honeybees, on the other hand, are believed to have originated in Africa or Asia, and are considered native to Europe, Africa, and the Middle East. And yet, the number of colonies of honeybees in North America has increased.

Conservation isn’t as simple as saving or focusing on a single species.

How can you help save the bees?

Beekeeping has been soaring in Australia. In Queensland, for example, the number of hobby beekeepers has doubled in the last five years.

While Thompson makes it look fairly easy to move swarms of bees, you should not try and move bees yourself without adequate training.

Bees in swarms are unlikely to sting, and usually move along in a few hours. But if you are concerned, call a professional beekeeper to remove them.

But to help save the bees, you don’t need to be a beekeeper. Simply planting flowers in your garden and reducing your use of pesticides can make a big difference.

Go outside and get to know your native bees, and maybe even get involved in some citizen science.

Read more: These 3 tips will help you create a thriving pollinator-friendly garden this winter