Small Pacific Island states depend on their commercial fisheries for food supplies and economic health. But our new research shows climate change will dramatically alter tuna stocks in the tropical Pacific, with potentially severe consequences for the people who depend on them.

As climate change warms the waters of the Pacific, some tuna will be forced to migrate to the open ocean of the high seas, away from the jurisdiction of any country. The changes will affect three key tuna species: skipjack, yellowfin, and bigeye.

Pacific Island nations such as the Cook Islands and territories such as Tokelau charge foreign fishing operators to access their waters, and heavily depend on this revenue. Our research estimates the movement of tuna stocks will cause a fall in annual government revenue to some of these small island states of up to 17%.

This loss will hurt these developing economies, which need fisheries revenue to maintain essential services such as hospitals, roads and schools. The experience of Pacific Island states also bodes poorly for global climate justice more broadly.

Catches from the Western and Central Pacific represent over half of all tuna produced globally. Much of this catch is taken from the waters of ten small developing island states, which are disproportionately dependent on tuna stocks for food security and economic development.

Their governments charge tuna fishing access fees to distant nations of between US$7.1 million (A$9.7 million) and $134 million (A$182 million), providing an average of 37% of total government revenue (ranging from 4-84%).

Tuna stocks are critical for these states’ current and future economic development, and have been sustainably managed by a cooperative agreement for decades. However, our analysis reveals this revenue, and other important benefits fisheries provide, are at risk.

Tuna species are highly migratory – they move over large distances according to ocean conditions. The skipjack, yellowfin and bigeye tuna species are found largely within Pacific Island waters.

Concentrations of these stocks normally shift from year to year between areas further to the west in El Niño years, and those further east in La Niña years. However, under climate change, these stocks are projected to shift eastward – out of sovereign waters and into the high seas.

Under climate change, the tropical waters of the Pacific Ocean will warm further. This warming will result in a large eastward shift in the location of the edge of the Western Pacific Warm Pool (a mass of water in the western Pacific Ocean with consistently high water temperatures) and subsequently the prime fishing grounds for some tropical tuna.

This shift into areas beyond national jurisdiction would result in weaker regulation and monitoring, with parallel implications for the long-term sustainability of stocks.

What our research found

Combining climate science, ecological models and economic data from the region, our research published today in Nature Sustainability shows that under strong projections of climate change, small island economies are poised to lose up to US$140 million annually by 2050, and up to 17% of annual government revenue in the case of some states.

In the RCP 8.5 scenario, by 2050, our model predicted the total biomass of the three species of tuna in the combined jurisdictions of the ten Pacific Island states would decrease by an average of 13%, and up to 20%.

But if emissions were kept to the lower RCP 4.5 scenario, the effects are expected to be far less pronounced, with an average decrease in biomass of just 1%.

While both climate scenarios result in average losses of both tuna catches and revenue, lower emissions scenarios lead to drastically smaller losses, highlighting the importance of climate action.

These projected losses compound the existing climate vulnerability of many Pacific Island people, who will endure some of the earliest and harshest climate realities, while being responsible for only a tiny fraction of global emissions. 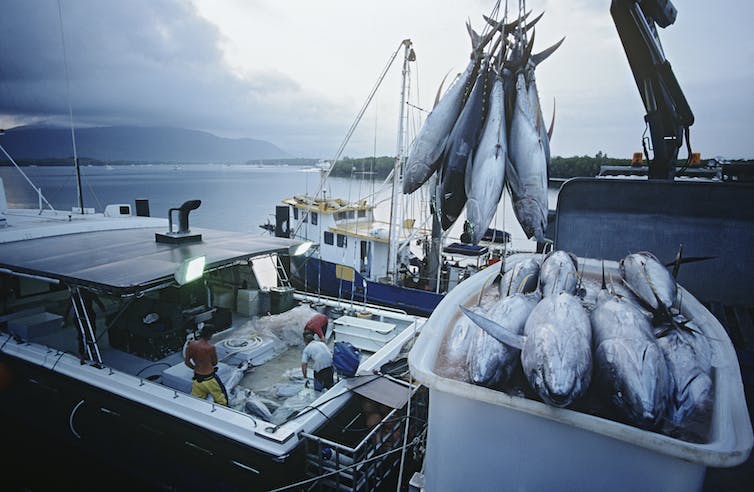 What can be done?

Capping greenhouse gas emissions, and reducing them to levels aligning with the Paris Agreement, would reduce multiple climate impacts for these states, including shifting tuna stocks.